Tactics Analyst: Earthquakes vs. Sounders not much to look at

The San Jose Earthquakes and Sounders FC reminded Major League Soccer critics of their main arguments on Saturday night. In a barbaric game, San Jose was lucky to have one of the many long shots fall into the net to win 1-0.

Share All sharing options for: Tactics Analyst: Earthquakes vs. Sounders not much to look at 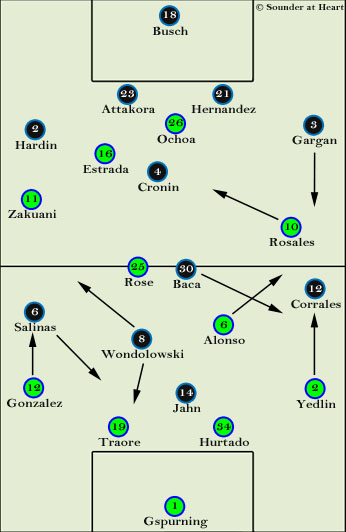 Seattle Sounders FC's 1-0 loss to the San Jose Earthquakes was a classic MLS battle, but not in a good way.

Both teams played the 4-4-2 formation typical of the league, with one holding midfielder behind three more attack-minded players to complement the forwards.

Seattle's outside backs overlapped frequently, but neither initiated any real combination play. Central players on both teams pushed wide out of necessity, as the majority of the play occurred in the channels.

It was a long-ball affair that likely had fans of tiki-taka shaking their heads for 90 minutes. From the midfield stripe forward, both teams pumped ball after ball into the penalty area, hoping for a breakthrough.

The main course of action all game was easy to discern: a long ball out of the back, followed by a lay-off to a central player, who would in turn spray it wide for a cross into the box. Steve Zakuani broke up the monotony by running at players every chance he got.

Seattle cannot point to a shorthanded roster as reason for its abysmal play, as it was largely the usual suspects in the midfield who caused the trouble. Zakuani, for example, had 14 dribbles (as defined by Opta) this week compared to eight the previous week against Portland. He also had eight unsuccessful crosses out of nine attempts.

The Sounders made their game plan no mystery. The goal was to get the ball into the penalty area by any means necessary, spawning 28 open-play crosses. San Jose was barely more diversified in its attack, trying 12 crosses from the run of play.

Both teams' defenses proved adept at defending free kicks and corner kicks launched into the box, of which there were plenty. San Jose looked the more dangerous team attacking at these opportunities, with Wondolowski missing inches wide on a header at the end of the half.

The Earthquakes' Designated Player found the ball at his feet several times in and around the penalty area, as he usually does. And as he normally does, he did enough to secure the victory for his team on one of those occasions.

Also sprinkled into the mix for Seattle were nine shots from outside the 18-yard box, including two first-half bombs from right back DeAndre Yedlin that landed somewhere in the stratosphere. Ever since he scored from distance against Tigres, he has been a little too eager to pull the trigger instead of trying to find a path to goal with higher probability of success.

San Jose on the Counter

As the game settled into what could be called its rhythm, Seattle had more opportunities going forward. The Earthquakes sat back and absorbed the pressure, hitting the Sounders quickly on the break.

Chris Wondolowski floated between the top line and midfield, winning long balls and knockdowns in front of Seattle's defense. It was that willingness to battle for the ball that led to his goal, as he was first on the scene when strike partner Adam Jahn flicked Jon Busch's long goal kick over center back Jhon Kennedy Hurtado's head.

Wondolowski's withdrawn starting position also helped on the counter by giving him space to fill with his runs. Instead of starting too high and being easily marked out of the play, he could run at gaps in the Sounders defense created by losing the ball unexpectedly.

On the other end of the field, it's time to start asking questions of Seattle's ability going forward.

Both Eddie Johnson and Obafemi Martins missed this game through international duty, but Sammy Ochoa and David Estrada couldn't be faulted for the result on Saturday — neither of them saw much of the ball.

The real problem with the Sounders' lack of creativity in attack, besides how unskillful it makes the team look, is that it is an indicator of a lack of ideas in midfield. The men in the middle, as well as the outside backs, have been one-dimensional so far, taking people on and thumping numerous balls into the box.

Forget the fact that it's stylistically poor. Arguments could be made the opposite way, as not everybody subscribes to the tiki-taka school of thought (just look at the stubborn English Premier League).

Right now, it's simply not getting results. Seattle has one goal in 270 minutes of league play (four in 450 total competitive minutes) this year. Something has to change quickly, as the team has already equaled its poorest start in MLS history.

The darkest mark on that 0-2-1 record so far came on Saturday. Two teams that date back to the old NASL days should expect more of themselves. The sport deserves better.