At 7:30 PM tonight the greatest rivalry in CONCACAF soccer takes place as the United States heads to Azteca stadium to try and get points in Mexico. You're watching. Watch with us.

When they say that soccer is about tribe there are few better examples to American sports fans than the United States v Mexico rivalry. It consumes one nation and gathers both states' fans up in this homogeneous goop that ignores club ties. It is the greatest rivalry in CONCACAF. It is a border war. It is neighbor against neighbor. It is in-law against in-law.

One side has the power of history and quality on its side. The other is the USA. It is the inverse of so many other relationships between the two cultures that are so intertwined. It is also a rivalry younger than about half the readers of this site. 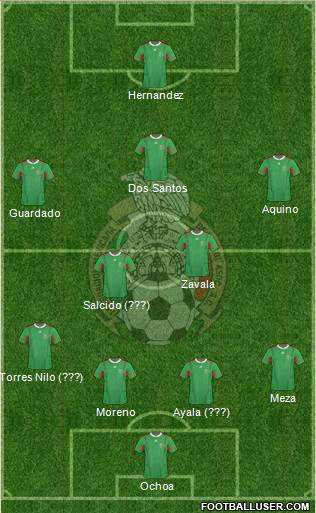 Slowing down Mexico winger Andres Guardado is a key

Tonight's match is the rare time when Americans can feel like the underdog. Mexico is better at this soccer thing than we are. It really is not that close. The pressure is on the greater footballing nation, who is at home, without a win in qualifying. We might lose. But we will do it together. With several hundred at Azteca this match is the unification of American soccer - whether Portland, or Seattle, or KC, or New York, or LA.

Matches in Mexico City make history. It could see the end of a coach if they lose to the lowly Americans. It is a chance for a collection of mainly MLS players to declare themselves, to declare their nation, ready for the World Cup.

Eddie Johnson will probably see the field, but this match is not about Seattle Sounders FC. This is about the United States of America. It is not a qualifier. It is a test of quality and heart. It is the biggest match of any non-World Cup game for this nation.

There is generally a high ground at Sounder at Heart. A ground where fandom and reality mesh. That ground drops out against Mexico in Mexico. It is my test. It is the ACT/SAT/ASVAB/DLAB, the fitness test, the ruck march; it is Q-School; the Bar; it is every job interview of your life. It is the ultimate hack. It is the chance for my passion to be my victory. It is the next step in the journey.