Two proud and successful teams in transition are trying to right their seasons. But they can't both do it this weekend.

Ever since the 2009 season, when Seattle entered the league and hosted the MLS Cup that Real Salt Lake won in penalties for their first and only title, there has been a sort of special relationship between the two teams. Behind the Galaxy dynasty, they stand above the rest of the pack as the only teams to accumulate more than 200 points over Seattle's first four years and make the playoffs all four seasons:

The teams' playoff matchups have been epic — and even — with a Salt Lake blowout in Sandy in 2011 nearly turned around in the return leg in Seattle, and a defensive goalkeeping exhibition in 2012 finishing on a last minute Mario Martinez goal past the nearly superhuman Nick Rimando. Both have made waves in CCL play, with RSL making the final in 2011 and Seattle making the knockouts in both 2012 and 2013. Both are built to entertain — eschewing the bunker and counter play that can lead to low-scoring success and instead playing for possession and sustained attack in front of the top defensive midfielders in the league. There is significant mutual respect between the front offices, the players, and (as much as possible) between the fans.

Even their short-term fortunes are apparently linked. When the teams met on July 4th last season, both were struggling. Seattle was in their worst stretch of the season — an 8 game winless streak (which would stretch to 9 after the teams drew). Salt Lake was on a 3 game losing streak. But by the time they met again in September they were vying for the #2 seed in the West, eventually finishing within a point of each other. And now they face each other again on similar paths. Both teams have struggled out of the gate in 2013 thanks to roster instability.

Seattle, pinched by the salary cap, had to make big moves this offseason. They lost one DP to Colombia, then ejected another DP and signed another as the season kicked off. Injuries have hollowed out the central midfield and international duty has forced a constant rotation of role-players in the midfield and attack. That's helped the Sounders crawl out of the gate to an 0-2-1 start.

RSL, also a victim of the cap, went through their first roster overhaul in many seasons to break up what had been one of the most stable lineups in the league. Starters Fabian Espindola and Jamison Olave were sent to New York and Will Johnson to Portland. Rotational players Paulo Jr (to Vancouver), Justin Bruan (to Toronto), and Johnny Steele (eventually to New York) were let go. Add a long-term injury to playmaker Javier Morales and their own international losses and after a promising season-opening win over last season's Supporters Shield winners they've stumbled out to a barely better 1-2-1 start.

Here's their average position map from their 1-1 rivalry week draw with Colorado. Note I'm skipping their last match, a 0-2 road loss to FC Dallas. Thanks to international duty that RSL roster was frankly unrecognizable. This one more closely matches what we could see this weekend: 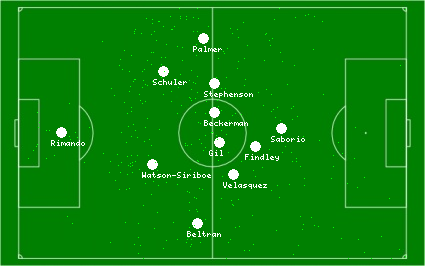 The rudiments of the diamond are there, with a narrow central midfield of Kyle Beckerman at holding mid, two wide midfielders, and Luis Gil playing the top of the diamond. But Gil played much deeper than you'd expect an advanced playmaker to play. Instead it was the wide midfielders — especially Sebastien Velasquez — pushing into the attacking third, playing more like wingers than is usual for the diamond. Alvaro Saborio is always a dangerous goal scoring threat and he has all three of their goals this season, but he's struggled to find the same space without Espindola making runs. They've turned to his onetime partner Robbie Findley fresh back from Europe, but it's actually been sub Joao Plata who's been the difference maker. He assisted on two of those three goals despite only playing 20 minutes a game. I wouldn't be at all surprised if we soon saw him starting and Findley taking over as super-sub.

In the midfield it'll once again be a contrast between the middle and the wings. It's in the nature of the diamond to command the central midfield. Real Salt Lake will and should outnumber Seattle in the center as their wide midfielders suck in and Gil pulls back. That will make possession through the center a struggle. If the Sounders try to force it they'll be creating turnovers and relying on Osvaldo Alonso to clean up the mess. The better route is on the wings, which is fortunately a strength of the Sounders. Steve Zakuani is back to more or less his speedy self and he was the lone spark of offensive threat against San Jose with both Eddie Johnson and Obafemi Martins away. Velasquez doesn't strike me as the most defensively astute midfielder — he clearly prefers to be involved in the attack — and that could leave Tony Beltran isolated too often against Zakuani. That in turn forces Beckerman to shade to that side to cover, which opens up space for Johnson and Martins to run rampant.

On the other side, Mauro Rosales hasn't been his vintage self for some time. Last season he struggled when Adam Johansson was out for extended time and replaced by Zach Scott. Without the threat of the overlap to pull defensive pressure away he was too easily bottled up and his crosses became predictable, hurried, and easily cleared. DeAndre Yedlin now provides that overlapping threat again and we can only hope that the danger can overwhelm Lovel Palmer or Abdoulie Mansally and once again create the space Rosales needs to operate effectively.

The Seattle offense, when healthy and present, really is ridiculous. I haven't even talked about Martins yet, because what's there to say? He's an EPL quality attacker. He demands a double team, but Real Salt Lake doesn't have the bodies to do it. They can't leave Eddie Johnson completely unmarked. If Beckerman is forced to stay in the middle to cover him, Zakuani should run circles (possibly literally) around Beltran. But for all that I can't bring myself to be confident about scoring goals. We just haven't done it yet this season. We need to see the pieces operating together before we can take it for granted.

And for Seattle, the trick will be balancing the desire to win this game with the need to win on Tuesday against Santos Laguna before a very difficult return leg to Torreón. Is a regular season MLS match in March critical? Not really. This league has demonstrated again and again that just making the playoffs is the most important step. Wild Cards have won the Cup more often in the last few seasons than Supporters Shield winners. Tuesday has to be the priority. There would be no realistic coming back from a loss in the home leg. But there's no question a loss in Sandy would sting. It would right RSL's ship and leave Seattle still hunting for a win in 2013. Over that, even a draw would be a fine, if frustrating, accomplishment. And that could mean early subs for Seattle's offensive weapons and the potential to give up chances to Plata and company in the late minutes, leaving points on the table.

If Seattle's and RSL's fortunes remain mystically linked this season, let's hope it means that both teams will recover from a roster overhaul and a slow start to return to consistent glory. Otherwise it might mean that this is the first season that the teams show their mortality and miss the playoffs.