Experienced players know how to weather a storm on the road in a tough atmosphere. The Montreal Impact defended resolutely and attacked quickly on the counter-attack to defeat Seattle Sounders FC in the opening game of the MLS season. Meanwhile, the Sounders missed one key component of their normal team. 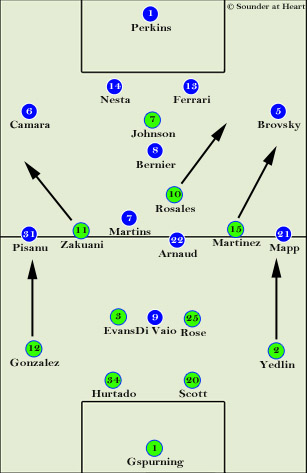 SEATTLE — The goal that sank Seattle Sounders FC 1-0 against the Montreal Impact came against the run of play, but it was far from unexpected. The Sounders failed to impose its defensive presence in the middle of the field, leaving it susceptible to counter-attacks all game.

Rosales drifted wide and often pressed up alongside Johnson to give the team a two-forward look. Wide men Steve Zakuani and Mario Martinez started tucked in and flared out wide when the ball was on their respective sides, but they were too withdrawn for the formation to be a true 4-3-3.

Brad Evans and Andy Rose held in front of the back four, and the outside backs had freedom to overlap often. This left a bank of at least five players in front of goal on most occasions, which should be enough to stifle most attacks.

Get the ball wide

Offensively, Seattle wanted to get the ball wide as quickly as possible. Martinez and Zakuani ran at outside backs Jeb Brovsky and Hassoun Camara all night, outpacing them and getting service off time after time.

The trouble with the service from wide areas (graphic above) was not its quantity — it was its quality. Of the 25 from open play, just four found a target inside the penalty area. In total including set pieces, eight successful crosses were offset by 26 unsuccessful attempts.

Montreal dealt with the pressure well in the back, as center backs Matteo Ferrari and Alessandro Nesta showed their quality and experience with multiple clearances (graphic above) under pressure. With only Eddie Johnson as a target on most open-play crosses, Seattle's efforts were not enough to trouble the Impact back line.

Two men in place of one

On the other end of the field, Osvaldo Alonso's absence through suspension left a void that two men attempted to fill. Evans and Rose patrolled Alonso's normal territory, attempting to shield the back four from penetrating passes.

Nonetheless, Montreal found success threading the ball through after dribbling at Seattle's defenders.

Unlike Alonso, Rose and Evans were unable to impose their presence in that space. Evans picked up a yellow card, but both fouls that led to it were higher up the field than a defensive midfielder would normally hold.

The bite Alonso brings to the position, tackling ferociously and breaking up attacks from all angles, was most conspicuously absent on Montreal counter-attacks. The Impact's central midfielders had room to dribble and pass in the middle far too often, and it nearly burned Seattle on more than one occasion.

Part of this came from the outside backs getting caught high, and part of it came from inability on the part of the holding midfielders to win the ball.

The lone goal of the game came from a mixture of a quick counter-attack and poor positioning in the back, along with an indecisive moment at a key point in the build-up. 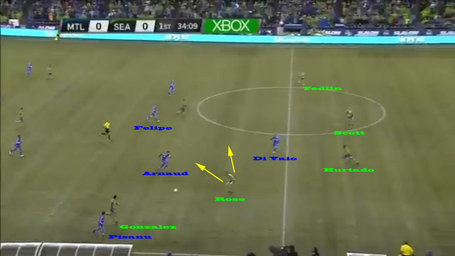 That indecisiveness came when Rose did not step to intercept the initial midfield pass from Andrea Pisanu to Marco di Vaio. He should have been able to cover the ground directly in front of him — which is where the ball passed through on its way to the Impact target man. 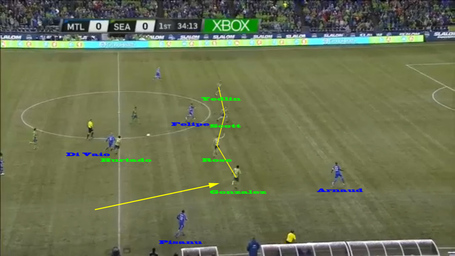 Instead, Jhon Kennedy Hurtado had to step up and pressure the ball with Rose dropping to cover, which left the Sounders with a relatively flat back line that was prime for a penetrating pass.
However, Leo Gonzalez hustled to recover his positioning after being caught up the field in attack at the moment of dispossession, and Davy Arnaud was in an offside position at this point. All di Vaio could do was dish the ball to Felipe Martins and wait for the play to develop further. 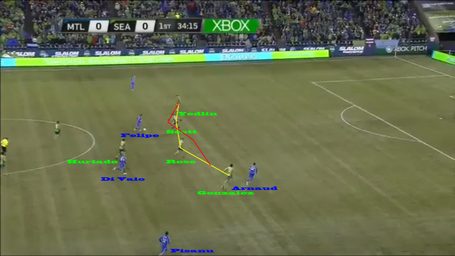 When Felipe got the ball, Zach Scott had to step up to pressure him. DeAndre Yedlin was the only other defender in the correct position at this point. Rose was too high to provide proper cover, and Gonzalez was too deep.

In a perfect world, a back four shape looks like a check mark. That would have allowed Gonzalez to hold the offside line, and when Felipe attempted his through ball to Arnaud, the receiver would have been offside. 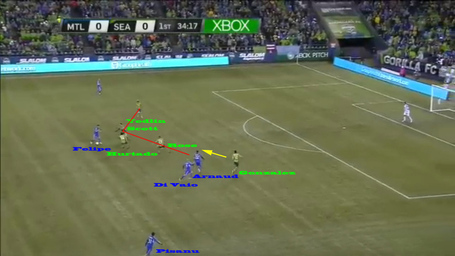 Even though Felipe delayed on the pass, Gonzalez did not tuck in far enough to take up an effective position. The only real danger in this situation could have come from Arnaud receiving the ball; di Vaio was wide enough that the defense could have readjusted had he gotten it instead. 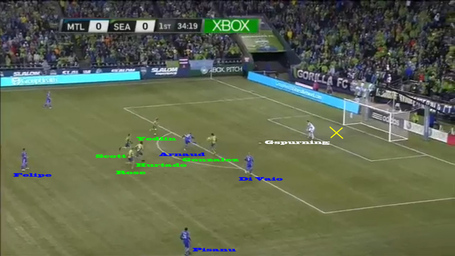 The final error for Seattle was goalkeeper Michael Gspurning's positioning, too high off his line. If the ball is outside the penalty area and bouncing, it is much easier for an attacker to lift it over the goalkeeper than if it is on the ground.

If Arnaud settled the ball to the ground, then Gspurning could have advanced to cut off the angle (it is much easier to move forward than backward). As he stood, even his 6-foot, 5-inch frame was prime for a chip shot.

Not to take anything away from Arnaud's finish, which was impeccable.

Montreal could have had a second goal off the counter early in the second half, but Yedlin did well to recover and cut out a cross from di Vaio. 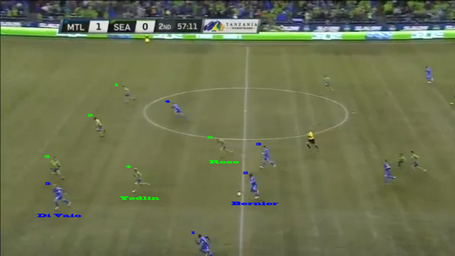 Again, the key moment came when the Impact's Patrice Bernier had time and space to advance the ball in what would normally be Osvaldo Alonso territory. The visitors do not have numbers up, as Seattle has five defenders to their five attackers, but they still get an opportunity out of it.

Bernier has no pressure on the ball as he advances, quickly and confidently, through the heart of the Sounders midfield. Yedlin does well to apply enough pressure to force a pass and recover to block a cross from that same pass, but it is a holding midfielder's job to confront players in that area of the field.

When Alonso returns from suspension, Seattle will have the protector of its defensive line back. This game showed his value to a team that just doesn't have the same menacing defense without him.