The Sounders barely missed out on a result last week in San Jose, but Real Salt Lake exploited the team’s weaknesses much more thoroughly. Despite pulling a goal back in the second half, Seattle never really threatened to make RSL’s lead disappear, losing 2-1. 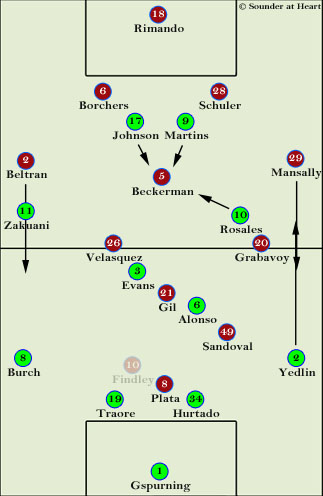 It was a familiar story line for the Sounders in Salt Lake. A miserable first half gave way to a second-half push that just wasn't enough in a losing effort.

While Real Salt Lake only won 2-1, the quality gap between the two teams was much wider in reality. Salt Lake played with a purpose and clear plan of attack, while Seattle often looked lost when it had the ball.

Both teams played their usual 4-4-2 formations. Salt Lake used a target-shadow combination up top even after Robbie Findley went off injured early (but not before scoring the first goal), relying on overlapping outside backs for much of its width, as the midfield triangle stayed fairly compact.

Seattle's midfield continued to be a problem area for the team. The wingers pushed high and looked to provide an attacking threat. In the middle, both Brad Evans and Osvaldo Alonso saw the majority of their action underneath the halfway line.

Salt Lake won the game because of its ability to control the middle. Ever-steady Kyle Beckerman held down the base of the diamond and distributed, while U.S. under-20 star Luis Gil has come into his own at the attacking spot with Javier Morales' recent injuries.

In the back, Seattle looked shaky as ever, giving RSL multiple opportunities on goalmouth scrambles.

Saved by the Austrian

This game demonstrated a long-true fact: without Alonso and goalkeeper Michael Gspurning, the Sounders FC defense would be badly exploited. On Saturday, without repeated heroics from Gspurning, the scoreline would have been more lopsided. 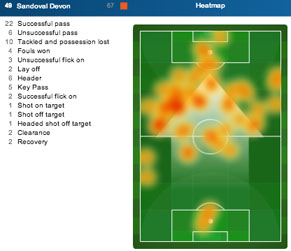 Both Hurtado and Traore often kicked the ball clear instead of attempting to play out of the back, and Hurtado most notably gave away a needless corner kick in the 67th minute when he headed a ball behind under no pressure.

In defense, they weren't much better, having trouble with RSL's speed and smart runs.

However, the bulk of Seattle's problems lie in central midfield. Alonso is a destroyer — one of the best in the league — but Evans is no playmaker. 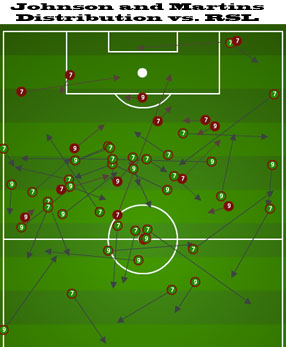 Right now, Seattle needs somebody to pull the strings in central midfield — the way Beckerman does for RSL, the way Diego Valeri does for the Portland Timbers — to get the most out of a high-quality forward partnership of Eddie Johnson and Obafemi Martins.

As it is, Johnson and Martins had to drop into midfield far too often to find the ball. If they didn't, they would have barely touched the ball all game.

Mauro Rosales is the closest thing to a playmaker Seattle has, but he has been wasted in a right wing role from where he drifts inside the majority of the time anyway. He needs to be allowed to start in the middle and play the classic No. 10 role with a different wide man on his right.

Straight off the training ground

Despite RSL's midfield dominance, the winning goal in this game came off a set piece. It was a well-executed corner kick that the team has likely trained multiple times:

All manner of offensive and defensive factors came into play on this goal, including deceptive runs, poor marking and effective finishing. 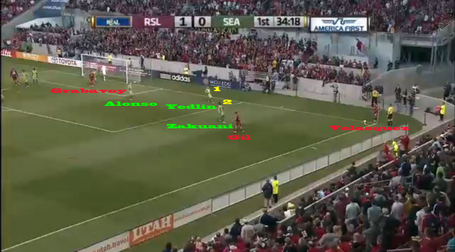 At first, it looks as though RSL will play a short corner through Gil and server Sebastian Velasquez. Two Sounders players come out to take care of it. Both defenders are necessary because if only one player steps to pressure, the two RSL men can play a one-two right around the defender and waltz into the penalty area.

When the Sounders step well, Gil pulls away. Now, it looks as if Velasquez will serve a ball into the mixer. 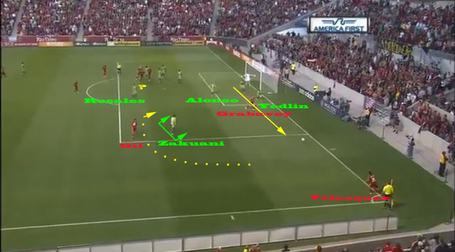 Instead, Ned Grabavoy starts a second run to the short area. Meanwhile, Steve Zakuani takes his eyes off Gil to ... watch the play? It's not clear exactly why he takes his attention away from the player he is marking here.

Gil continues to bend his run back toward the middle of the penalty area.

Meanwhile, Rosales also watches the play develop in front of him. It's unclear whom he is marking, although he could be taking away the runner from the top of the box.

However, when the ball gets played short, Gil becomes a much more dangerous and viable option, and nobody is really marking him. 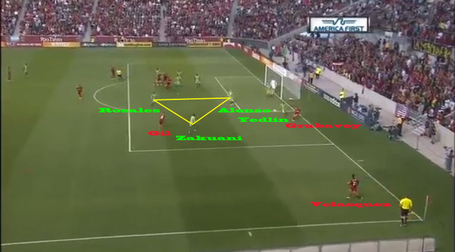 As Grabavoy serves the ball in, a triangle of space has opened up exactly where Gil is making his run. Alonso's primary role on this set piece is to mark the near-post space and defend it from a driven cross, but that is no longer going to happen.

Still, neither he nor Rosales can really be blamed for what is about to happen. Zakuani should have kept his attention on Gil and followed him from the time he ran short. It would have prevented the goal. 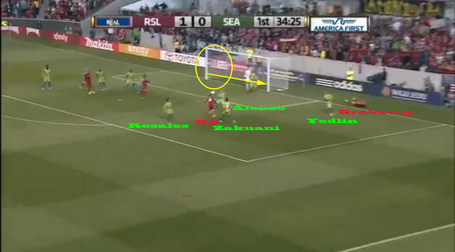 Aside from its deceptive qualities, this play has the advantage of opening space for a far-post finish in many situations. On short corners, if the defending team elects to put players on both posts, the near-post man is generally responsible for following the short runner — as DeAndre Yedlin did in this situation.

Then, the far-post marker will slide to the near post because it is the more dangerous space to cover. That leaves the far post wide open.

The Sounders don't put a player on the far post on corner kicks (only a near-post man), so this play doesn't really open up a new space on frame. However, Gil's header was always going to be targeted there, and he executes well.

It's not looking good

Sounders FC didn't look out of its element against San Jose. The Earthquakes played the same long-ball game that Seattle likes to play, turning the match into a back-and-forth slugfest that skipped the midfield on every play.

That changed this week.

It's easy to go from playing possession soccer to playing in a long-ball game. The level of technical ability and tactical decision-making is much lower in the latter than the former.

But the Seattle center backs had rocks for feet against Real Salt Lake, and the Sounders weren't getting numbers around the ball anywhere near as effectively as their opponents. Seattle got played off the field as a result, and it's a sight that fans might find familiar in 2013 if something doesn't change quickly.

Right now, Seattle is not a good soccer team — in any sense of the notion.