Sounders defense didn't entirely break, but it bent way too much vs. Tigres

Allowing one goal is hardly a disaster, but the Sounders must come up with a better gameplan and have much better execution if they are to make history on Tuesday.

Share All sharing options for: Sounders defense didn't entirely break, but it bent way too much vs. Tigres

Leading up to the Seattle Sounders' trip to Monterrey, Sigi Schmid openly talked about the need to avoid disaster. Of course, winning was ideal and securing a tie would have been very nice, but the goal was to head back to Seattle without digging themselves a horrible hole the way they had done in playoff series each of the past two years.

In that sense, it was mission accomplished. The Sounders will host UANL Tigres on Tuesday needing a 1-0 victory to force overtime or to win by two goals to advance to the CONCACAF Champions League semifinals. It's doable, if not entirely likely.

If the Sounders are to advance, though, they'll need to play much better than they did in the first leg. The most charitable thing you can say about the Sounders' play was that they employed a "bend, don't break" defense in which they allowed Tigres to supply copious amounts of pressure. Let's take a closer look at the chalkboard to see just how close the Sounders came to disaster:

The big numbers tell you that Tigres had 65 percent of the possession. That's a lot, obviously. Perhaps even more telling is where they were possessing it.

The Sounders, meanwhile, only attempted 24 passes inside 30 yards and completed just two passes in the penalty area.

Perhaps the player that most exemplified the Sounders' tactics was Brad Evans, who is usually a pretty good bellwether for what the team may be trying to do in any give game. Evans is usually the more attack-minded of the two center midfielders, but on this day he rarely got involved in the attack. Here's a comparison of his heat maps in the MLS opener against the Montreal Impact and the Tigres match: 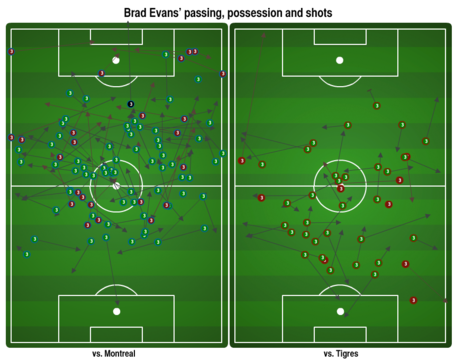 There's not a single action within 30 yards and his only touch within 40 yards came on a blocked shot. He wasn't quite the turnover machine that he may have seemed to be at times -- he lost possession nine times and had five errant passes -- but this was hardly a standout performance from one of the Sounders' leaders. Where Evans was most active, and effective, was in the defensive half where he had 12 recoveries and two interceptions.

Shots in the box

Of course, none of this would have really mattered if the Sounders were able to keep Tigres from creating much danger. The Sounders failed pretty miserably on that front and were bailed out by Michael Gspurning having one of his better games for the Sounders.

Not only did Tigres out-shoot the Sounders 18-3, but 10 of those shots came inside the penalty area and Gspurning was forced to make six saves. 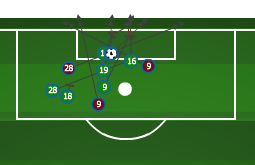 As a point of comparison, the Sounders only gave up 10 shots from inside the penalty area in one game last year: at Santos Laguna, which actually squeezed off 11 of them. Gspurning was not in nearly as good form then, and Santos Laguna scored six goals.

What did we learn?

Allowing a team to outpossess you is not in and of itself a bad tactic. The Sounders have managed to do that plenty of times over the years and still win. But doing so with a team like Tigres is just playing with fire. Their ability to find seams in the defense is just too acute, especially around the penalty area.

They also can't afford to play games with the offside trap, as they got caught doing on Tigres' goal. While Luis Garcia was clearly in an offside position, the Sounders were putting a lot of faith in the linesman to call him offside even though he was not directly involved in the play. Instead of following the play and perhaps winning the rebound on Gspurning's initial save, five Sounders defenders watched the play unfold.

It's this kind of mental mistake that absolutely can't be tolerated if the Sounders are to become the first MLS team to eliminate a Mexican team from CCL.