It is a basement battle as the Eastern Conference bottom fish travel west to take in their rare visit to CenturyLink Field.

As the Seattle Sounders sit with zero wins they get their best opportunity for that moment when they take on the New England Revolution, another team struggling as the season begins. Amid injuries and fitness the lineup for Seattle is in question. This is also true for the Revolution, but they have the biggest "injury of all."

Alston On Leave With Cancer 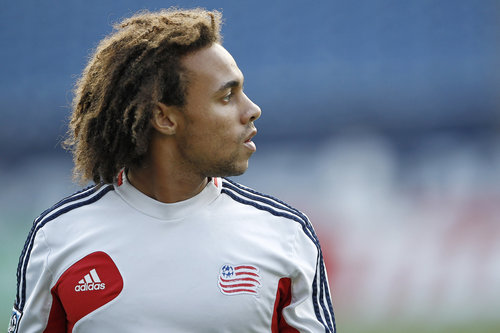 "It probably helps service some motivation for them. Alston is a guy who's been on that team for a while. Guys are close, and when you lose a member of the team to something like that you realize that life is more than just a game. I'm sure they'd like to give those wins to him and dedicate it to him, but that's their issue right now," Sigi Schmid said about New England's motivation. "Our prayers and thoughts are with Kevin, as well, and we hope things go well for him in his treatment, but we have our own concerns in regards to soccer."

With that issue as the backdrop for the match Sounders FC will be seeking their first MLS win of 2013. New England will try for only their second. Both sides are powered by deep midfields.

"They haven't given up many goals," Schmid scouted the team. "I think they've only given up two goals in the games they've played so far. They're off to a little bit of a slow start and I'm sure they'd like to be doing better. They've got quality players and they've got attacking options there with Bengston and Lee Nguyen and a few of the other guys - Kelyn Rowe, etc. They want to make things happen on the offensive end, as well."

Guiding us through Three Questions is Steve from The Bent Musket.

SaH: What is Nguyen doing that Feilhaber was not? Or is the difference Toja?

tBM: Right now, no one's doing anything that Feilhaber wasn't doing, except whining. This offense has been totally anemic, so I can't really say that Lee Nguyen or Juan Toja are really doing anything different or better than what Benny gave us last year. However, taking a broadview, Nguyen just seems to fit Jay Heaps' scheme a little better. I see Nguyen as a bit more of a slasher than Benny, which means he sacrifices a little of Benny's vision for the ability to create for himself on the dribble and find the spaces that Feilhaber needs created for him.

Toja, meanwhile, has been a bit of an enigma. He has almost no positional discipline, and ranges across the entirety of the midfield and attack looking for the ball. Sometimes this creates mismatches that the Revs should have been exploiting; sometimes it creates confusion amongst teammates, and forces either Toja or other players into poor spots. He adds a level of unpredictability, but the squad doesn't seem to have adjusted to his erratic style just yet.

SaH: New England is rebuilding its defense through the draft. Are the harsh results due to the amount of youth there?

tBM: Last year, probably. This year, no. This year the results have been all about the offense; the Revs have the best defensive record in the league right now, conceding just a half a goal per game. Andrew Farrell might be the most exciting defensive prospect in recent MLS history, and he's already playing well beyond his years. The addition of Jose Goncalves has also added some stability in the middle, and seems to have also had the effect of getting A.J. Soares back on the road to being a defensive rock and leader. This year, the kids are all right, and the mix of veteran presence has really been noticeable.

SaH: Sounders fans watched Mario Martinez thrill for Honduras, but be a little up-and-down in MLS. How is Bengston making his transition to the league?

tBM: Much the same. We get to watch him kill it in CONCACAF, scoring seemingly at will, but he has difficulty transferring that form to MLS. Right now he's at one goal in three games this season, but he scored pretty consistently in preseason, too, so there's hope. Part of the problem last season was service; it remains an issue this season, but I don't think he's really gelled his movement to the instincts of his teammates yet. He's also not getting quite the amount of support he needs from the 4-2-3-1 that the Revs have been running lately, but I think that can change in the future.

Abram actually looked at the dearth of long-range shots (and shots in general) from this team in the last few games, and I think he's got a point about how that affects Bengtson's game. Jerry's a poacher, through and through. He needs service, but he also feasts on rebounds, and decent shots on target from distance tend to create tasty rebounds. If the Revs start thundering off a couple of shots per game from outside the 18 that end up on frame, I think Jerry's chances improve drastically.

SaH: How are the team and community reacting to Kevin Alston's announcement?

tBM: Everyone has rallied around him and wished him the best. What else can we do? It's not the time to discuss any of his perceived strengths or shortcomings as a player; what we all remember now is that he's an all-around great guy who doesn't deserve to have to face this. He's asked for privacy, and it's been respected. The team has placed him on the DL (I assume for roster purposes) but as long as his recovery goes well, I expect he'll be welcomed back with open arms. The response from around the league, too, has been pretty inspirational, and I do believe that Kevin feels the love. If any Sounders fans want to express their well-wishes, you can tweet with the hashtag #GetWellKA or email GetWellKevinAlston@gmail.com.

Significant Injuries:Alston out, obviously, but Chad Barrett is also listed as "out" with a hamstring strain. Reis and Toja are questionable, but they were that last week, too. Sene is actually questionable, though I'd be shocked if he made an appearance.

tBM: Tough result in Mexico on Tuesday night. Coupled together with the team's severe struggles in the league, do you see the aggregate loss galvanizing the squad into righting the ship, or is this just going to pile on the misery for the surprisingly lackluster Seattle Sounders?

SaH: I don't know that the issue was the mental image of the team. But there are positives to take from this CCL run. One, the team knows that they can hang with anyone. No club in MLS is as talented as Tigres, let alone Santos Laguna. Seattle went 1-2-1 -1 against that quality of team despite the injuries and delayed showings by DPs. Bigger than that though is that they are finding their identity. The club is learning how to deal with what Yedlin brings to the field and have integrated Shalrie Joseph in a midfield role that changes how the team uses Osvaldo Alonso and the wide mids. Lastly there is a change in defensive posture recently where the club is pressuring higher on the field in attempts to force turnovers in more threatening areas.

tBM: Speaking of league struggles, what's going on up there? Seattle has been a perennial contender since entering the league, and aside from missing Jeff Parke and Fredy Montero, it really doesn't seem like there's been much of a dip in talent level for the Rave Green. What the hell is up with the Sounders?

SaH: Playoff level talent is definitely on the squad. There have been injury issues (Martins, Joseph, Ianni, Evans and others). There were national team calls (Martinez, Johnson, Martins). There was necessary squad rotation due to fitness (Rosales, Gonzalez). There were benchings to send messages (Hurtado, Zakuani, Rosales). But other teams have similar issues and actually win games. If there was one horrid moment it was when the Timbers managed the late draw. If Seattle can get their first win in league play, suddenly the national narrative surrounding the team drastically shifts from the current panic.

tBM: There's been lots of talk about the emergence of rookie fullback DeAndre Yedlin. Since the Revs are also starting a rookie at fullback and seeing a lot of success with him, we're curious to know your impressions of the young man and where you think his career trajectory is headed.

SaH: Yedlin has holes in his game. He also plays a rather unconventional fullback. His on ball skills are more like an attacking mid. His crossing needs significant work. If not for his stunning speed his defense would be exploitable, but he has that speed so it is not. It is a lot of fun watching a local grow from the system, go to an amazing soccer college and then not just get signed but bump a Swedish National Team player off the roster. Let that ferment for a bit. Sweden's number two right back was cut because of the quality offered by an HGP that was at Akron just in December. Kid has a future and it probably involves leaving the Sounders for richer waters in a few years.

tBM: Give us an under-the-radar player that Revs fans should watch out for in this match.

SaH: Hate to do this because he may not be fit enough to get in another starting performance, but Shalrie Joseph. You already know him well, but Sigi is using him in front of Alonso in a box-to-box role threading long passes on offense, allowing the wide mids to buzz around and force turnovers and Alonso to sit deep and kill counters. He's also still got the height and savvy to be a threat on set-plays. Is Joseph the player he was in 09 & 10? Nope. But he doesn't need to be. In Seattle he needs to be kind of like a blend of Christian Tiffert and Brad Evans while providing locker room leadership.

tBM: Finally, let's have your projected starting XI and a scoreline prediction.