New England Scouting Report: Ghosts of Seasons Yet to Come

A look at two struggling teams: one unaccustomed to losing and one that's been doing it for years now.

Share All sharing options for: New England Scouting Report: Ghosts of Seasons Yet to Come

It's easy to become accustomed to success. It's easy for a fan base to become complacent. It's a soothing story to tell yourself that your favored franchise is just intrinsically better than those others, entitled to competitive seasons year after year while other teams languish. That even if the biggest prize of a Championship never comes, your team is guaranteed to at least be in the hunt every season.

It was probably easy for New England Revolution fans to believe that. From 2002 to 2009 under the steady hand of Steve Nicol they made the playoffs every season. They reached the MLS Cup final 4 times in 6 seasons, though — as a reminder that being a fan is a dangerous, cruel business — they never won it. Even so, they did win a Supporters Shield and a US Open Cup. And in 2008 they won the SuperLiga — a kind of sub-Champions League/Cup — beating Atlante, Pachuca, and Santos Laguna in the process. Even without championships they were relentlessly competitive.

It would have been easy to feel entitled to success, but in 2009 — just as the Sounders entered the league — they were in decline. They staggered into the playoffs as a wild card and lost to Chicago in the first round. And the next season it was over — suddenly and ruthlessly. They wouldn't finish with more than 35 points for the next three seasons, jockeying with Toronto for last place in the Eastern Conference. Nicol was fired. The dynasty was finished. And it wasn't coming back easy.

This weekend when they come to visit CenturyLink Field, it will be two basement teams facing each other. The Sounders hope that their form is just a blip — a speed bump resulting from a roster overhaul and injuries to key players — that will sort itself out soon. So that we can get back to the 15 wins a season that we're accustomed to. To the success we're entitled to. But across the field will be a team that reminds us it doesn't always work itself out so quickly. That some blips take years to recover from. There will be hard seasons yet to come for Sounders fans. Losing seasons. Consecutive losing seasons. But hopefully not this season. And this weekend the team has a perfect chance to go out and beat a team that's down and prove that we're not there yet.

In their post-glory years, the consistent story for the Revolution is that they haven't been able to stabilize all areas of the field at once. For a time their midfield was in good shape with Shalrie Joseph and Benny Feilhaber running the center, but they had no reliable scoring threat. In 2011, Joseph — still one of the best holding midfielders in the league — was their top scorer with 8 goals. So they loaded up in the attack with the additions of Frenchman Saër Sène and Honduran Jerry Bengtson at forward and Lee Nguyen as a winger. But then the midfield fell apart when Joseph was shipped off to Chivas, leaving the serviceable Clyde Simms at holding midfield. They lost their midfield bite and struggled to generate turnovers and maintain possession. In the offseason Feilhaber moved to Kansas City and now the midfield is being rebuilt around world traveler Juan Toja, who can run up and down the central midfield all day, freeing Nguyen and Diego Fagundez to focus on offense. It hasn't worked yet, as they only have 1 goal in 4 matches, but that may be as much a result of Sene's injury and Bengtson's international responsibilities.

Here's their average position map from their last match, a 0-1 home loss to FC Dallas: 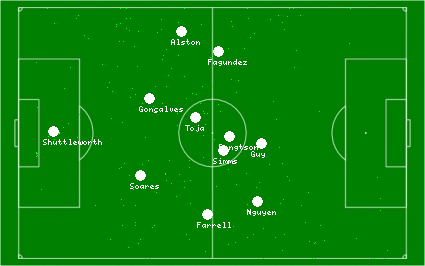 It's a vertically compact formation, especially for a home match. The defenders are pushed forward and the forwards are pulled back, to the point that forward Bengtson and holding midfielder Simms are averaging the same space. Toja, putatively the playmaking midfielder, is actually hanging around the defensive midfield, chasing back to pick up the ball.

The biggest roster difference this weekend will be the loss of Kevin Alston, who's been diagnosed with a (mercifully treatable) leukemia. Obviously the importance of that to his life and the team overshadows any soccer implications, but it does leave a hole at left back, likely to be filled by utility defender Chris Tierney. The rest of the defensive line is solid, if young. First overall pick Andrew Farrell is the second best rookie right back in the league this season, solid both on defense and up the sideline on offense.

For Seattle, we're just waiting to wake up from this weird dream and for the season to start. We're still trying to figure out who should actually be on the field, because when we put something close to an expected starting lineup out against Real Salt Lake they looked incompetent and lifeless and were promptly turned into roadkill. Steve Zakuani and Mauro Rosales provided almost no defensive presence from the wings and Eddie Johnson none from forward, leaving Brad Evans and Osvaldo Alonso to get overrun by superior numbers. They gave up 25 shots and were lucky to only lose by one goal.

The CCL diversion seems to have righted the ship somewhat, as they played tough against very good teams, both home and away. Some players lost their starting jobs, some had a fire lit under them, and some were given new assignments. The net effect is that the team facing New England this week should be a more composed and confident one than left Sandy two weeks ago.

With Obafemi Martins still out, forward may still be the best fit for Steve Zakuani. He struggled to finish chances as a forward in Torreon, but he created plenty of them. And moving him up top frees up a midfield place to play both Evans and Joseph, which along with Alonso creates a very stout midfield band. That leaves the question of right mid, where Rosales looked good in a sub appearance but who has had nothing like his top form as a starter this season. He's become easier and easier to dispossess, left to gesticulate to the referee after losing the ball to a tackle 8-10 times a match. Mario Martinez would be the obvious alternative, or you could see Evans there, as it was a common position for him in the first few MLS years. That would leave the left for Martinez, Alex Caskey, or Lamar Neagle.

The question in defense is whether Jhon Kennedy Hurtado has earned his starting spot back. He was one of the major offenders against Real Salt Lake, looking lackadaisical around unclaimed balls in his own box. In his place, Zach Scott has been playing. He held up reasonably well given the quality of the Mexican competition, but it was his tackle from behind that led to Santos' second goal and he shouldn't be expected to be a long-term solution at center back, even against MLS competition. Still, if Patrick Ianni is still out injured he's the likely non-Hurtado choice ahead of Ashani Fairclough or Eriq Zavaleta.

It's difficult to pick out any threads tactically, given the unpredictable nature of the Seattle lineup these days. New England have not been a good team offensively, and the key to keeping that the case will be to shut off their service. Bengtson needs good service to operate and Nguyen is more of a slasher, leaving Toja the playmaking job. But he drops so deep looking for the ball it's possible to pressure him early and prevent him from re-joining the attack. If Joseph and Alonso can shut Toja down, the Revolution threat will come from the wings, where Nguyen and Fagundez (or Cisse) will operate.

At the other end, Seattle has all the offensive tools needed to break down their opponent. They will certainly create plenty of chances at home. It will just be a question of whether they learn to finish.

The ultimate goal on Saturday is to prove that we aren't the new New England Revolution. That our winning era isn't over yet.