Tactics Analyst: An ode to Ozzie

Osvaldo Alonso doesn’t get enough credit. With his new central partner, Shalrie Joseph, Alonso has been freed up to have even more of a major role for the Sounders, on both sides of the ball — and both players deserve credit for that.

Share All sharing options for: Tactics Analyst: An ode to Ozzie 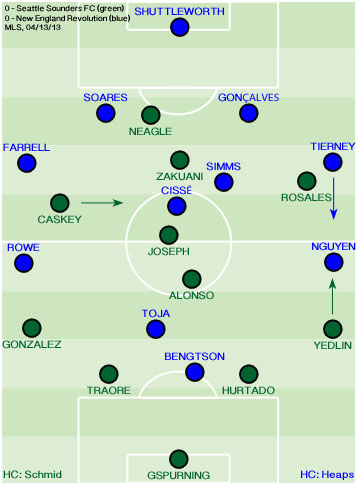 SEATTLE — For the first time in a while, Seattle Sounders FC dominated a game on Saturday in the 0-0 tie against the New England Revolution.

Both teams played a 4-4-2 hybrid formation that often looked like a 4-2-3-1. Deep-lying central midfielders disrupted play through the middle on both ends, making flank play the key to success for both teams.

Seattle, as has become standard, tried to get the ball wide as quickly as possible. The Sounders didn't really build out of the back, instead getting the ball to a wide player or checking forward to run at defenders one-on-one.

Non-forwards Steve Zakuani and Lamar Neagle created multiple opportunities as they tried to impress head coach Sigi Schmid up top, their finishing sorely lacking on an afternoon that just needed one finishing touch.

The Sounders attempted 590 passes against New England, their highest number of the year. The next-highest attempt totals were 547 against Montreal on opening day and 510 in the home CONCACAF Champions League match against Santos Laguna.

Nearly 20 percent of those 590 attempts came from Osvaldo Alonso in the middle of the park. He completed 108 of 116 attempts, including 53 of 57 in the attacking half.

For a defensive-minded player, that is a remarkable feat. Defensive players are expected to be tidy with the ball and complete the majority of their passes, but Alonso showed a willingness to go forward and take risks in the attacking half of the field as well. 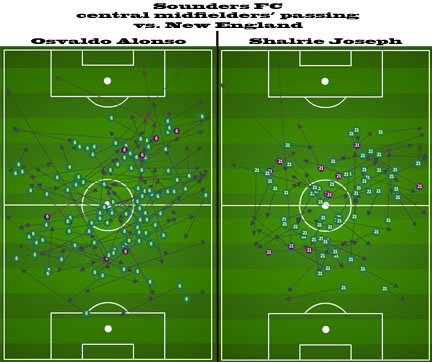 U.S. national team head coach Jürgen Klinsmann, who was in attendance and spoke about Alonso with media at halftime, might have been reminded of Michael Bradley's recent performances in the red, white and blue.

As is standard in his game, Alonso was also a defensive beast against the Revolution. His final tally showed four tackles won and just one lost, three interceptions, four clearances and 10 recoveries (winning a loose ball or knockdown). 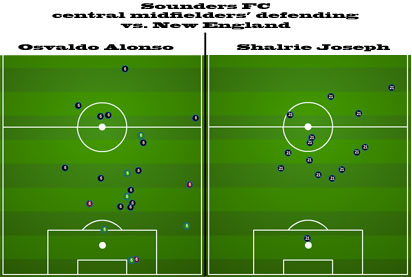 Alonso's chalkboards show the way he and his central midfield partner, Shalrie Joseph, complement one another. At 63-for-74 passing, Joseph didn't make as much of an attacking impact as Alonso.

However, he displayed an ability on the ball that Seattle lacked before he became fit enough to play. He never panics in possession, and despite his obvious limitations — neither he nor Alonso play incisive balls that unlock defenses very often — Joseph's inclusion has raised Alonso's play to another level.

Joseph takes a lot of the defensive burden away from Alonso, freeing him up to take on more attacking responsibility and giving him the confidence to press forward more often. Without Joseph backing him up, Alonso probably doesn't try the audacious side volley in the 15th minute that was as close as Seattle came to scoring all day.

Looking at the numbers, Joseph was as impressive as Alonso defensively: 14 recoveries and one interception. He didn't stray too far from the center circle on either side of the ball, but New England could barely complete a pass that originated inside Joseph's defensive stomping grounds.

The newcomer's biggest hurdle right now is overcoming the stigma associated with his unfortunate end with the Revolution and his ill-fated stint at Chivas USA. If he is to be judged solely on his performances in rave green, Joseph has been a revelation in midfield who has done exactly what his role on the team dictates.

What neither Alonso nor Joseph are asked to provide, and what their skill sets do not easily allow, is that final penetrating pass that leads directly to a goal. It was a problem that Seattle had with Christian Tiffert as well, and all three have received criticism from Sounders fans for not fulfilling roles that they were never asked to fulfill in the first place.

Joseph and Alonso would be the perfect holding pair in a 4-3-3, 4-2-3-1 or "empty-bucket" 4-4-2. What they cannot provide is that attacking midfielder's presence that Xavi and Andres Iniesta give FC Barcelona.

To combat that, Zakuani dropped deep into midfield to find the ball at his feet on Saturday. Obafemi Martins did the same against Real Salt Lake in his only Sounders start.

Both are decent options for the role in front of the two holding men, as their speed and dribbling ability would open up spaces to exploit. But in the current Seattle set-up, they had to check back a lot because of the large disconnect between central midfield and forward lines.

That top point of the central midfield triangle has yet to be found. Until it is, the Joseph-and-Alonso partnership will always feel like it has something missing.