So many forwards, so few goals

Sigi Schmid started his seventh forward combination in the nine competitive matches of 2013. Those men have combined to score only two goals. Is this really a problem of depth or just misfortune?

Share All sharing options for: So many forwards, so few goals

It's nice when the team weekly notes sheet does some of the math for a writer. It simplifies things a bit. It also means many places are likely to head in the same direction. Let's put a little Sounder at Heart twist on this chunk of data from Seattle Sounders FC;

Due to injuries, international call-ups and squad rotation, Seattle skipper Sigi Schmid has used a different starting lineup in every game this season. The effects of the inconsistency in the Starting XI is most evident up top as Schmid has started seven different forward combinations, including Eddie Johnson starting with three different partners, Sammy Ochoa playing as the lone striker, and winger Steve Zakuani starting up top the last two outings. Although the forwards have struggled to score, accounting for two of the team's six tallies, the attack continues to create dangerous opportunities. Last Saturday against New England, Zakuani and Lamar Neagle combined for six of the team's 13 shots, putting three on target.

That seems pretty dire. And Sigi even said yesterday that the team can not simply count on Eddie and Oba solving the problem.

"You can’t take it that way, you can’t say that once these guys come back everything will be fine, but on the same token reality is that we haven’t had a full practice, we haven’t had a chance to work on any sort of combinations with the whole group. We have played nine different lineups in nine different games so we have to mix the lineups all the time. We haven’t found any consistency in that form. So from that standpoint, missing a forward certainly hurts. Missing key players like an Evans at certain times just makes it a little bit harder for you to establish your rhythm and get into a flow. You don’t want to point to that as an excuse, but we’re at a stage that obviously we know we have to win, and that’s the pressure we put on ourselves. It’s not like when you look at our last two games that we’ve been terrible. We’ve played fairly well in that period of time; it’s just a matter of us making sure that we bang away the goals."

For a couple of the forwards one need only look at their history's to see that they are better scorers than they've been so far. Others are completely new to the league and so historical rates are impossible to translate. Then there is Steve Zakuani whose pre-injury play may or may not be related to his current play. Only time will answer that.

But there are established rates of scoring from shots and shots on goal. With massive quantity of shots team will approach those rates. Using those rates for the men who have played forward and scored a goal you see that Seattle is missing out on three goals from that group if they could just equal league wide scoring rates. Johnson and Rosales are historically better than league average. Martins has yet to record a shot. 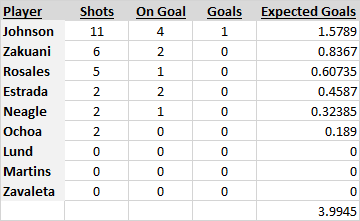 This is crude. And merely an example of how bad the finishing has been so far. It is also a reminder that the once midfield powered offense (2011) has capable forwards who are not doing it. Plenty of combinations are being tested. Deeper looks in the data show that Seattle is just plain unlucky (TempoFree, Soccermetrics). The Sounders aren't even getting the points they should based on goal differential, let alone expected goals.

Scoring will come. But the poll below once had 46% of voters seeing the Johnson/Martins combo as getting 30+ goals between them. That will likely fall now that the season is 15% done.