There's a time for Sounders to panic, but this isn't it

The Sounders have played much better in recent games, but they still need to figure out how to score and start winning games before it gets too late.

Share All sharing options for: There's a time for Sounders to panic, but this isn't it

Five matches without a win is a long time. It's an even longer time when you consider they are the only five games by which we can judge the Seattle Sounders' regular-season performance. I'm not going to simply explain it all away, but I will say that it's still a little early to move into fullbown freak out mode.

Let me at least start by laying out just how bad the Sounders' situation is. It has been well documented that this is the worst start in franchise history, now officially three points worse than their first five games of the 2011 season. It's also worth noting that no playoff team in either of the past two seasons started with five straight winless matches.

The factors leading to this start are easy enough to identify. The biggest is a rather alarming lack of goal-scoring. Only the New England Revolution have scored fewer goals than the Sounders' two. While that can be explained away at least in part by the fact that the Sounders' leading attackers have all missed time due to injury, there's legitimate cause for concern too. At some point in the season, the backups are going to be called upon again and they will absolutely need to perform better than they have so far.

The good news, if you can call it that, is the lack of scoring really is THE problem this year. The defense has not been spectacular, but it has been good enough to secure some points. The midfield has had problems, but the recent games suggest that is improving as well. I wouldn't say I've been thrilled with any one aspect of the Sounders' play, but I think talk about a broken system is vastly overstated.

Let's dig a little deeper into those positive, though (since, let's admit it, that's my bias).

I was among the first people to say that the midfield play earlier this year simply wasn't good enough. Mauro Rosales did not look like someone worthy of Designated Player contract, Osvaldo Alonso seemed to be trying to do too much and Steve Zakuani wasn't living up to his own standards. But we've seen something very different in the past two games.

It started with a solid road performance against Santos Laguna in which the Sounders managed to keep the ball reasonably and actually created quite a few chances. Where it was really apparent was this week against the Revolution.

For all the frustrations that come with an inability to score in that game, it really should be said that the Sounders played very well outside of the 18-yard box. Their passing, in particular was very strong, as they completed 490 of 592 passes. No matter how you cut it, that's a lot of passes and a very good completion percentage. And it wasn't like they were passing it around in their own end, either. The Sounders were 268-for-341 in the offensive half and 80-for-117 in the attacking third, even excluding throw-ins and corner kicks.

Here's how it looked on Opta: 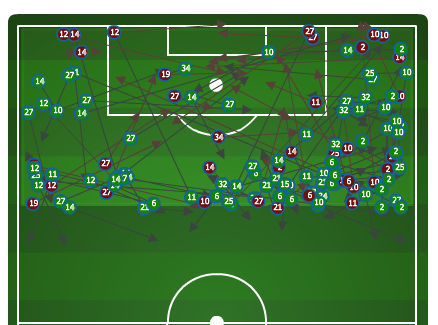 Not to be overtly comparing them to the Portland Timbers, but as a point of context I wrote about how good they looked against the Houston Dynamo last week. It was a truly masterful performance and it does appear as though Caleb Porter's style is bringing positive change to our Southern neighbors. The major difference was that the Timbers finished two of their chances, but, at least in the sense of passing, it was inferior to the Sounders' performance against the Revs.

The Timbers completed 464 of 560 passes overall and weren't anymore accurate than the Sounders the farther up the field they moved. They were 252-for-307 in the offensive half and just 64-for-90 in the attacking third, excluding throw-ins and corner kicks. 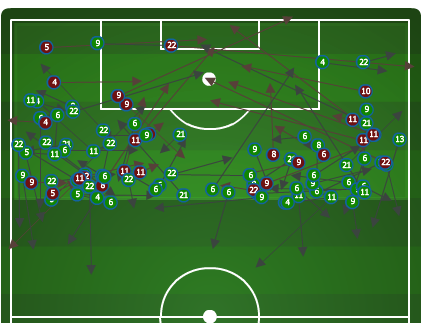 Five-games is only a snapshot

Not to poo-poo the Sounders' five-game winless run, but I was curious how it stacked up against some of the bad runs teams have gone on in recent years. While starting this way is hardly ideal -- the last team to make the playoffs after opening with five straight winless games was FC Dallas in 2010 -- a long winless run is not that uncommon for good teams to have at some point in the season.

Both of last year's MLS Cup finalists, for instance, had runs at least as bad as the Sounders are currently in. The Houston Dynamo, in fact, started the season 2-3-2 despite winning their first two games. The LA Galaxy actually lost 5 of 6 at one point, went seven matches without a win and opened the season with a 3-8-2 record before going on to win the championship game. The Vancouver Whitecaps (seven games) and, of course, the Sounders (nine games) had lengthy winless streaks and still managed to make the playoffs last year.

Of course, all of this optimism is only good for so long. At some point, the Sounders need to start putting balls in the back of the net and, more importantly, winning games.