A look at the new-look Colorado Rapids as Seattle travels to the mountains with a healthy lineup.

This week the Seattle Sounders' search for their first win of the season takes them across the imposing peaks of the Rocky Mountains to Commerce City, Colorado. It's a trip that's been kind to Seattle recently, with two wins in two trips over the last two seasons. The first of those was the infamous match in which Brian Mullan broke Steve Zakuan's leg. That moment and the fallout from it has tended to overshadow all other aspects of the matchup recently, but with Zakuani back to playing regularly we're back to focusing mostly on the soccer when these teams meet.

Even more than their recent history, the major reason for optimism in this match is the injury situation. Seattle is in the rare position of wining the injury report minigame. This week the full team trained since. . well, I don't remember the last time the full team trained. Even at times when the regulars were fit, there was always someone — like Andrew Duran or Babayele Sodade — on the long term injury list. But for now we have everyone mobile. That's not to say everyone is ready to play — David Estrada is still out with an eye injury — but having everyone practicing is a heartening development and it means we might be able to finally see the team that Adrian Hanauer and Sigi Schmid had in mind when they made a flurry of moves in the early season.

In contrast, Colorado's situation is more traditionally Sounders-like. Jaime Castrillon and keeper Matt Pickens are regular starters who are definitely out. And the questionable list includes Edson Buddle, Nick LaBrocca, Pablo Mastroeni, Mullan, and Martin Rivero — all major contributors. That list is a week old thanks to the new MLS non-policy about injury reports and have likely done some recovering in the bye week. But even if a couple of those players play, this won't be the Rapids first team.

Fortunately for them, the opportunity for playing time has allowed some young players to blossom, particularly Dillon Powers in midfield and Deshorn Brown at forward — both first round picks in the this year's SuperDuperDraft. Soccer by Ives awards an MLS rookie of the week title and the Rapids have won three in a row — Brown for his game winning goal over Chivas and Powers the previous two weeks for his play against Portland and Real Salt Lake, including a long goal against the Timbers. Brown is a fast, dynamic attacker who's always creating chances. He's now second in the league in shots behind Thierry Henry. The fact that he's only scored one run of play goal (his other was a penalty) on those shots is a bit disappointing, but if he keeps putting shots on frame at that rate he'll start scoring in bunches.

Here's the Rapids' APM from that win over RSL: 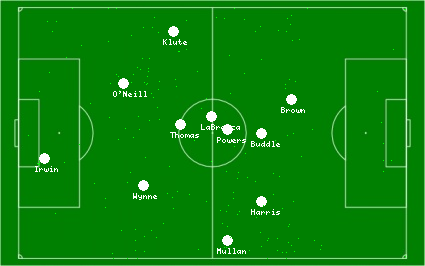 That's more or less a 4-3-3 or a 4-1-2-3. Brown, Buddle, and Atiba Harris is a pretty aggressive group of three forwards. Add in the positioning of Mullan, who's clearly more comfortable playing as a right midfielder as a right back, and it's a very offensive look. The area behind Mullan is covered by Marvell Wynne, which is a slightly odd decision given that Wynne's strongest trait is his recovery speed. It would seem to make more sense to put Wynne at fullback to run and recover on the line, but Oscar Pareja clearly has other ideas.

That creates an opportunity to attack through the Seattle left wing. Steve Zakuani has had his troubles finishing this season and his defensive effort hasn't been impressive, but one thing he's consistently done all year is create chances. He won't be able to run around Wynne like he's used to, but attacking the area with numbers will force Wynne to pay attention to him and open chances for Eddie Johnson, Obafemi Martins, or the Seattle midfield attacking the left side of the box. But there's an argument that Wynne's speed limits Zakuani's ability to be effective and instead we could play Mario Martinez or Lamar Neagle, who'd be more likely to create opportunities with passes rather than trying to break a defender down on the dribble.

It'll likely be a mirror image on the other side with the Colorado attack coming down their left flank as well. DeAndre Yedlin likes to get forward into the attack and Schmid generally likes him to do that, but it can open holes in the defense. Yedlin's recovery speed allows him to be more confident about getting forward and leaving that space, but if the Rapids can overload that side with numbers then even his speed won't help and it'll be up to Jhon Kennedy Hurtado, Osvaldo Alonso, and Shalrie Joseph to shift over to cover.

The Seattle defense has been pretty good this season, with only the Galaxy allowing fewer goals in the conference, and I think their ability to get a shutout rests on their ability to shut down Powers. Historically Seattle has been able to hold off good opposing forwards until they get good service on the counterattack. None of Harris, Brown, or Buddle are known as particularly incisive playmakers, so it would be up to Powers (or LaBrocca) to find that cutting pass on the break. If Alonso and Joseph can hold down the central midfield, the odds of a zero go way up.

At the other end, Colorado's defense looks vulnerable, both from the open right back area I already pointed out and from its general inexperience. The other center back is 19-year-old HGP Shane O'Neill and next to him at left back they've been playing 23-year-old Chris Klute on loan from NASL-side Atlanta Silverbacks. Even if Johnson and Martins can't both play, just one of them will have the experience and ability to trouble that line all game.

Of course, we've already seen plenty of 'trouble'. We've seen plenty of chances. We just haven't seen finishing. Seattle could have 6 goals without feeling particularly lucky. Instead they have 2 and that's the major reason they also have 2 points. We said it last week and we said it the week before, but at some point those chances are going to go in instead of being a foot too high or hitting a goalkeeper's shin. If that happens this week, we will have a good chance of finally, mercifully picking up three points.