Santos Laguna pushed the Dynamo aside in the quarterfinals. What can we learn from that contest ahead of Tuesday night's match?

Santos Laguna's list of conquered foes in the 2012-13 CONCACAF Champions League is fairly long. They did even better than Seattle Sounders FC in the Group Stage beating Toronto FC and El Salvador's Aguila in a total score of 13 to 1. The would advance to the knockout round as a better seed than Seattle and would face the Houston Dynamo. Santos lost that first leg. When they went home they cruised to victory riding the power of Torreon and a brutal counter.

What can we learn from that experience? 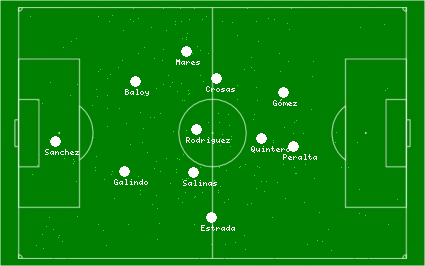 See that map? Love that map. That's what's going to happen here tonight at 7 PM. It is a 4-4-2 or 4-3-1-2 depending on what role you see for Quintero. Sigi said at yesterday's media session that he expects the attacking trio to switch around quite a bit (remember last year Herc was right mid that practically hovered on the endline) all three should be considered scoring threats and assist men. There is a right lean to the backline and midfield, so there may be chances for Zakuani and others to get behind that space when Seattle can counter.

That's what the map says. Let's chat with Dynamo Theory (who not only lost to Santos in the earlier round, but also covers Liga MX reguarly) for Three Questions to learn more.

DT: For years now, Santos has been a dangerous offensive team. Their current club is one of the most dangerous and talented they've had. First you have two forwards with a nose for goal and who never stop playing. Oribe Peralta and Herculez Gomez create problems for even the best defenses and they're likely going to be trouble for Seattle too. But it doesn't start and stop with the two guys up front. In fact, with midfielder Darwin Quintero - it gets even more dangerous. It's clear the CCL is the young Columbian's favorite tournament by the stats he puts up. Quintero and Nestor Calderon are incredibly good at finding some room in midfield, looking up, and sending a perfectly placed through ball to an attacker. The forwards are always active and the relationship between the strikers and midfielders is one of the best.

While Santos doesn't rely solely on counter attacks, they are one of the deadliest in Mexico at making defenses pay for falling asleep in the back (see Gomez' goal against Houston).

SaH: After an average start to their season they got hot right about the time they faced the Dynamo? Are they better with the more crowded schedule?

DT: Honestly, Santos is a class club through and through. They are always up for league and international play so I don't think they feed off a crowded schedule or anything like that necessarily. In recent years, along with Monterrey, they are one of the most consistent clubs in Liga MX and the CCL. Teams like this get up for competitions like this - no matter who they play the weekend before and after.

You have to remember, Santos went through a coaching change after missing the playoffs for the Apertura season and prior to this Clausura tournament. Pedro Caixinha was brought in and it was a culture shock to the club with a number of changes in routines. It takes some time to get the team running in the same direction.

I don't think they got hot at the right time, I think they're simply adjusting to the change in leadership, the players are buying into the new system, and they're finally starting to see the results. Not only were they able to get though Houston, they're currently sitting in fourth position in the Liga MX table.

SaH: Most would think that the smaller Mexican teams are vulnerable on set-plays. Why wasn't Houston able to punish Santos despite the height advantage?

DT: In many cases a smaller team could be considered vulnerable to tall, physical teams like the Dynamo. In the first half, Houston had two set pieces that gave Santos trouble (Bobby Boswell and Ricardo Clark headers), but Oswaldo Sanchez was able to stop the danger. Teams that are solid defensively will find a way to defend well and Santos has proved to be a strong defensive unit this year. When I spoke to Herculez Gomez, he specifically noted Santos' success in defense this season and credited Caixinha with the change in strategy. When everyone buys in great things can happen and this Santos club is proof of that. Felipe Baloy, who is a Panamanian international, is the anchor in the back and a big piece of their success. And America soccer fans may not want to admit this, but Oswaldo Sanchez continues to be one of the best keepers in Mexico.

Santos has proven to be a team with little vulnerability. In order to beat this club, you have to convert your chances. Opportunities may not come often, but Seattle (or anyone for that matter) can't afford to miss one.

Significant injuries: None. Should be noted Mexican National Team forward Oribe Peralta was injured in the second leg against Houston, but made his return to the starting lineup this past weekend in Liga MX action vs Queretaro.

Come watch Leg Two with us