What is a Sounder?

It is more than a team. The origins of the word go back well before the Seattle Sounders existed in any form. The shortest answer is probably something as simple as somebody who calls this region home.

Share All sharing options for: What is a Sounder?

With an off weekend for the club, there is some possibility of reflection on identity. The club wears color variants that are common to our region. The very name, Seattle Sounders FC, captures who we are as well. It is a region that is dominated, probably defined, by Seattle. But it is more. A failed ad campaign kind of captured it with the MetroNatural slogan.

Over the years many have called it home. Alan Hinton first came in the late 70s. Once here he would leave for brief stint with the Vancouver Whitecaps of the NASL. He came back. Seattle was home already.

"We love it, it always will be our home. The people are nice," Hinton said during Friday's scrimmage. "It's a wonderful place, especially on beautiful days like today. I've tried to contribute to the community by coaching kids. I've been an extensive youth coach."

And then he listed all the youth clubs and Academy teams he's influenced in the region. It is a long list. It is composed of coaches that developed through their time with him. Many who adopted the region as home as well. They are scattered from South Sound to North, from the hills to the East and the islands to the West. 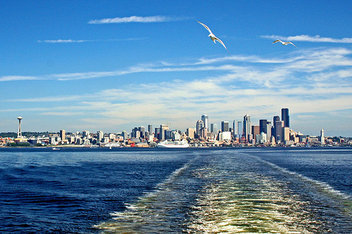 He is not the only player to call the Sound home after his playing days are done. Some have less direct ties to Coach. Roger Levesque, Taylor Graham and others are part of a different generation brought here from around the country and calling it home. There is a new generation coming through soccer and loving what the area has to offer.

For David Estrada that started when he was in UCLA. Seattle didn't need to grow on him.

"The moment that I knew that I was coming here, I was already in love with the city," Estrada reminisces. "When we used to come up here with UCLA I always thought that this was one of the most beautiful places out there. If anything I've loved it more and more each year. The people, so many things to do around the city, everywhere I go is so nice."

It is a region where love of food, city views and the outdoors can easily intermix. When the weather is pleasant, you can do what Mauro Rosales does.

"When the weather is good, I take some mata, and lie over in the park and look at the great views with the downtown over there." He does this because it is very easy from his West Seattle residence.

When the weather is not good, food is also a part of his lifestyle. It was a common theme for many of the players. It's a good thing Seattle is a top 10 foodie destination.

It may be too early to think about future homes for these players. But they like where they are now.

"There's different weather, a different kind of life," Osvaldo Alonso said. "I've been here five years and I'm very happy to be here in Seattle. It is so good here. Right now I play here. After soccer I will see where I'm going to live. Right now I'm focused to live here and play with the team."

Professional athletes have to do that. The era of the one-city athlete is disappearing, if it ever even existed. A few players with the Sounders will make their careers here. They will settle here. They will be Sounders Once and Always. But also, Sounders in more than soccer.

The slow weekend off leads to different activities. There is no consensus. They can tell you at length what they enjoy. Sometimes casual (Josh Ford's ribs and watching sports), sometimes outdoorsy (Evans will escape to the hills, but always Seattle.

I will be with my family. I’m waiting for my second baby so I’m going to be with my wife and take care of her.-Alonso

Hinton is watching his third generation come through. Many of his players and coaches from the NASL era are here working in soccer or retired. The middle era of the A-League and USL sees men coaching. Now of course he sees others doing the same thing.

"What pleases me most with all that background is seeing all the players who've stayed," Coach says with a smile.

So what is a Sounder? It's one who stays. Or with whom Seattle stays with them as life takes them to other places. It is being open and friendly, or leaving people alone when they need it. It is understanding the meaning of an empty chair at a table for four or helping others as they go through similar traumas. A Sounder is taking to social media because there are others like you out there and you want to talk to them, even if you once had trouble finding each other in dark bars at 7 AM.

Enjoy the off weekend. You will be doing the same things your heroes in Rave are doing. Even without this sport you are Sounders. So are they.