Having not won a match in league play, the Sounders shook up their lineup in a 1-0 Champions League loss to Santos Laguna. Sigi Schmid’s new-look team may not have won, but it took a step forward in what has been an otherwise dark time. 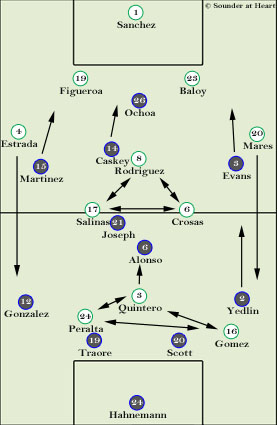 SEATTLE — Sounders FC started another new lineup on Tuesday, trying to erase the bad taste of two consecutive league losses. The 1-0 loss to Santos Laguna wasn't the result Seattle wanted, but it was a stylistic step in the right direction.

The starting shape was a 4-2-3-1, shifting into a 4-3-3 in attack. Osvaldo Alonso and Shalrie Joseph slotted into the holding midfield roles in a slightly staggered fashion, and Mario Martinez and Brad Evans played the wings.

Alex Caskey's role was a little less defined, as he drifted between the forward and midfield lines. At times, he looked like a shadow striker to Sammy Ochoa's target role, and Joseph pushed into Caskey's original space.

On the other side of the ball, Santos was a fluid 4-3-3, dropping to a 4-4-2 with a diamond midfield in defense. Carlos Quintero played the false 9, dropping from a target spot to the point of the midfield diamond when Santos lost the ball.

Wingers Herculez Gomez and Oribe Peralta pinched in when Quintero dropped back, and they spread wide when he advanced. All three interchanged positions often, and they all looked comfortable running in any area of the field.

Likewise, the Santos midfield triangle of Juan Pablo Rodriguez, Marc Crosas and Rodolfo Salinas exchanged positions a lot. When coaches and pundits talk about fluid formations — or not getting caught up in formations — this kind of system is what they are describing.

It's not that Santos doesn't have a starting formation. It does, but the players aren't glued to their starting positions all game long. Talking about formations places certain players in certain spots, but it shouldn't limit them to that same square yard of grass all game long.

For example, it would be inaccurate to describe Djimi Traore as a target striker. However, he does come forward from his central defensive starting position, so he isn't strictly limited to a stagnant spot between the other center back and the outside back. 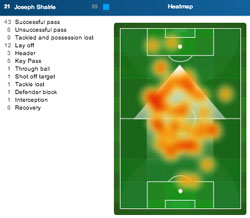 The most notable lineup change was Shalrie Joseph's inclusion for the first time in a Sounders uniform. As expected, he fit in next to Alonso in the holding midfield role.

Alonso and Joseph could become the yin and yang of the Sounders midfield, playing in essentially the same spot but with two completely different styles. 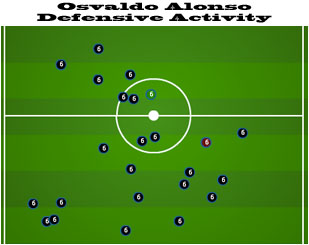 Joseph is a passer — think Michael Bradley — and he completed 43 of 49 attempts on Tuesday. That takes some pressure off Alonso, who is a destroyer — think Jermaine Jones. Alonso was free to defend and win second balls with Joseph as a partner and not have to worry about distributing high up the pitch.

Alonso did get up the field on occasion, finding himself on the ball in the attacking penalty area more than once, but his primary contributions were defensive. He made 14 ball recoveries and nine interceptions.

How does a full complement change the equation?

If head coach Sigi Schmid decides to stay with a similar system when every player is healthy and available, it poses some interesting selection dilemmas. The questions include the usual "where does Brad Evans fit?" But also, can Obafemi Martins play that withdrawn striker or attacking central role?

That's a spot fans are used to seeing Fredy Montero fill, but Martins showed against Real Salt Lake that he is willing to drop deep to find the ball. He seemed willing to let Eddie Johnson run the show up top and focused on looking for the ball at his feet.

Another option would be to push Martins high next to Johnson and play an "empty bucket" 4-4-2, with Alonso and Joseph holding deeper and the wide players pushing high. That would require a forward to check deep nearly every time.

The options are endless. Tuesday showed one possibility, but at this point, with a 1-5-1 record in all competitions, Seattle needs to find one that works. Quickly.