The loss to Santos Laguna showed less than optimal personnel in a different kind of 4-2-3-1 than Seattle has run before and some of those tenets should be adopted when the full team is healthy.

There's going to be a lot of time spent on how that 4-2-3-1 played, because it was different. What was different about it was not that it was used. Sigi Schmid has used that general shape before and in some ways a majority of time when Montero was here the 4-4-2 played very similar. Just look at how Alex Caskey was asked to play.

"I wanted [Alex] Caskey to be a little bit higher, he sometimes dropped a little deeper, but I wanted Caskey, [Brad] Evans, and Mario [Martinez] to be like the next attacking group. I thought Evans got in a couple times in the first half, but then there were misplays at key moments. Those guys were to join in and link up, but I thought the effort of that group was pretty good."

He did not play as high as Sigi wanted (more coming on this). What was more unique than past versions was two-fold.

Interchanging in the band of three

Martinez, Evans and Caskey switched a lot. When you look at the average position maps that we generally use as previews you see initially that they seem narrow. That is just an artifact of the process. When players switch so much they blend into the middle. 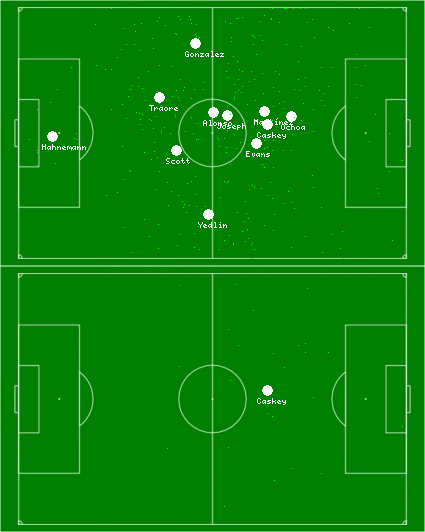 The lower portion of that image is just Caskey. The little dots are where his actions occurred throughout the first half (sidereal uses that to reduce the clutter of subs). If those are aligned slightly forward and the name is removed it would look like a Montero game. Which leaves the question - can Obafemi Martins work in that space if there are throughballs coming from the CM and wide players? If so that element of the new shape is easily adopted. Because there were more low passes into space for a speedy forward. There just wasn't a speedy forward. The other question is can Martins provide the high defensive pressure that Seattle used that night?

Generally the Sounders attacking midfielders are not defenders. Some of this is about effort, but the other part is that they just aren't very good at it. But when those attacking mids include Brad Evans and Alex Caskey high pressure happens. Not just buzzing around irritating the opposition stuff, but ball winning through interceptions and second balls.

This second shift is something that also showed that the role Shalrie Joseph played was not as a defensive midfielder. Or if it was it was as a poor one. His space and usage was very similar to the traditional Evans/Tiffert that defined the non-Alonso for the past 4+ years. It was his ability to thread long effective low balls from that space that was different.

In that band ahead of Joseph Alonso were two defensively active players. They did quite well. Caskey, in that more withdrawn Montero-y space was very active. Evans too was effective in helping win the ball in higher spaces. This is something that probably will not work if that band is Zakuani, Martins and Rosales. But insert Evans for one of them and transition from defend to attack happens further up the pitch more often. With an outlet centrally in Joseph, deep with EJ in a holding space, a creator (either Zakuani or Rosales) and a speedster around Evans should have options.

By combing both of these relatively new tenets to what is currently done with optimal, or near optimal, talent the opposing team can not just abandon the side where Evans is because he will be moving. When both fullbacks are ball winners through non-tackles like Yedlin and Gonzalez are there will be men around to pick up the loose balls.

It is not radical. The biggest changes were not the shape, but how players were used within it. Some of those things are likely to carry forward, because Sigi made it clear that he wants activity not just on defense, but in the quality of runs offensively as well. The reduced squad, with little practice, just nearly nicked a point off of one of the top teams in CONCACAF. If the more talented players buy into that league play is going to be fun.