It may not seem that way, but looking at the average position maps suggests Sigi Schmid's tactics are more flexible than you might think.

Share All sharing options for: Three-back line has taken root in Seattle

During this rather awful start by the Seattle Sounders, one of the common calls is for the team to do something drastic in terms of formations. Whether it's calls for a three-man backline a three-forward set or something else, there seems to be this idea that one of Sigi Schmid's biggest problems is that he's hopelessly devoted to the 4-4-2 or some version of it.

I've long thought that was a bit unfair as the Sounders operational set-up seems to change pretty regularly. To test my hypothesis, I did a random sampling of average position maps from ESPN. What I found may surprise you, at least if you're under the impression that tactics rarely change from game-to-game.

As a point of reference, I grabbed the average position map for the 4-0 win at home against the LA Galaxy last season. Although it wasn't a perfect diamond, you can pretty clearly see a 4-4-2 set-up (pardon my awful PhotoShop skills): 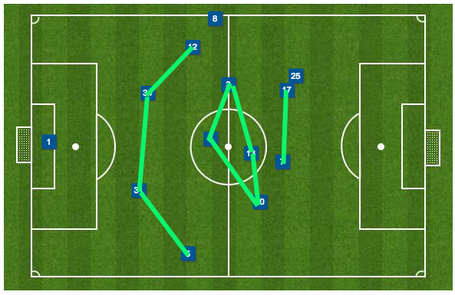 The backline is shaped exactly how you'd imagine a four-back setup would look. The midfield, too, looks about how you'd expect. Brad Evans was the left mid that day and was predictably pulled closer to the center. Mauro Rosales was the right mid that day and drifted in a lot, swapping spots with Christian Tiffert on a regular basis. Somewhat surprisingly, Fred Montero tended to drift more to the left and Eddie Johnson was stationed squarely in the middle of the attacking third.

Fast-forward to the March 23 game at San Jose. I was actually a little surprised to see how much the entire team was pushed forward, but the biggest surprise was where Sammy Ochoa ended up. The big forward actually ended up playing in the spot you'd expect a central attacking mid to fill, which shows just how much he was trying to hold up the ball and let his teammates run off of him.

We can't know, for sure, if this was by design but this was also where we saw Yedlin really join the midfield band in a way he hadn't done in the first two MLS games. In fact, Yedlin was essentially the right midfielder as Rosales really played forward alongside David Estrada and Steve Zakuani. 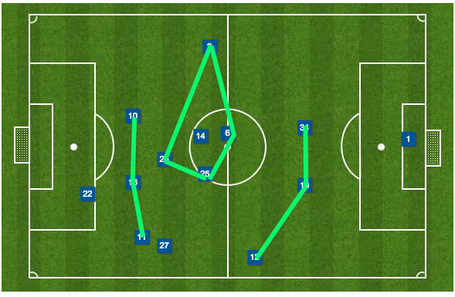 A less pronounced three-back line showed up at RSL, too. Yedlin's average position map put him on the offensive side of midfield. That Eddie Johnson was the farthest Sounder up the field was not a huge shock, but I was a little surprised to see how deep Obafemi Martins ended up playing. Considering how bad the Sounders looked, especially in the first half, this probably isn't the best shape for them, but they were essentially in a 3-6-1. 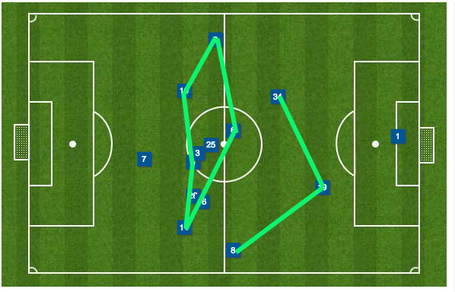 I know this is not the setup people are asking for when they say they'd like to see a tactical shift. But for fans of the three-back defense, this is probably about as close as they are going to get.

The reality is that Yedlin is essentially a wingback, bombing up and down the line with remarkable ease. The problem with it has been that for all the positives the 19-year-old has shown, one of them has not been crossing the ball.

Yedlin is completing just 65 percent of his passes, a number you'd normally only find acceptable if the payoff was a bunch of assists. But Yedlin has shown a great ability to recover, play defense and get himself into dangerous positions moving forward. His ability to join the midfield also allows the Sounders to generate width despite their right mid of choice cutting in an awful lot (as we know both Rosales and Mario Martinez tend to do).

The problem hasn't been getting players into good positions, though, it's been what they are doing once they are there. Whether it's Yedlin, Rosales, Martinez, Zakuani or whoever else is playing in those wide positions, they must be better.