San Jose doesn't have a lot of weaknesses, but they haven't been as impressive this year as last. Keeping Wondolowski in a funk and finally getting a breakout performance on offense would continue what's been a very good May.

My scouting reports this month have been pretty pessimistic and yet so far the results have been positive, so I'll continue the trend. San Jose is a really tough team to play. At Kansas City might be the toughest game in a season in theory (up there with at the Galaxy), but Seattle has a weird history with the Sporks that apparently gives the Sounders the edge (in league play, anyway). The Earthquakes are defending a Supporters Shield won on the back of a series of late-game comebacks last season that over the year progressed from odd, to fortunate, to impressive, to inevitable. And it's continued into this season, with Stanford rookie Adam Jahn filling the role of late game target man dynamist when Steven Lenhart and Alan Gordon haven't been available.

And now San Jose is developing a reputation for thuggery, both on and off the pitch. In their last Cascadia away match, the 1906 Ultras — evidently convinced that being a *true* fan requires thievery and assault — left a trail of mayhem across Portland (ably documented by the Timbers blog The Axe), which led to a series of sanctions imposed by their own front office, which was probably pretty embarrassing. So be vigilant on the streets of Seattle tomorrow. Keep a close eye on your scarves. But try not to get lured into any brawls. We don't want to get pulled down to their level.

Between the lines, Gordon was suspended for three games for using the magic f-word (no, the one that's actually offensive) during that same Portland match. Lenhart was suspended two matches for an accumulation of incidents involving him acting like his usual self, prompting his own coach to admit that he has to knock it off. Both are returning to action against Seattle, but the Quakes still might be suffering due to poor discipline. In their mid-week game winger Marvin Chavez cold-cocked Logan Emory with his elbow while both were getting up from a tackle. It wasn't caught by the ref, but I'd be surprised if the MLS Disciplinary didn't suspend Chavez. They tend to take a dim view of blows to the head.

I've been to the South Bay. In fact I'm in Stanford now. The people here are reasonably laid back. I have no idea what the problem is with the San Jose organization. But I'm glad we have the Butcher of Kazar to hold the line on the pitch. And large, mature, well-run supporters groups to help keep a handle on things off it.

Dealing with San Jose's physicality isn't the only challenge. They also employ the defending Golden Boot winner. I call him Wondo the Ghost, but apparently that hasn't caught on (I HAVE NO IDEA WHY). Chris Wondolowski isn't particularly incisive or strong or fast or accurate. He is, however, absurdly good at not being marked. Part of that stems from the antics of the target forwards around him, who are good at drawing attention to themselves for both noble and ignoble reasons. But most of it is just that he's very, very good at moving off the ball to find space. At halftime of last year's MLS All Star game against Chelsea, the cameras caught John Terry telling Wondowloski: "Your movement is incredible. It’s like a nightmare for me." I'm not going to provide a better scouting report than Terry. His movement is incredible. He knows when to make late runs into the box when the defenders are occupied. He knows the exact moment to pull away from a marker's touch when he's distracted to free himself. He knows how to run laterally across the defensive line to force defenders to constantly pass him off until one of them makes a mistake.

Just witness his goal that would end up being the game winner over Toronto:

He's totally unmarked. The Golden Boot winner is completely unmarked. That seems like madness, and yet he pulls it off week after week, even against good defenses. In this one his marker looks like he's trying to hand him off, but nobody picks him up. And he's free for an uncontested shot in the box.

But after the duo (now trio) of effective big forwards and Wondolowski, it was the third threat that has really set San Jose apart offensively. Last season that was Simon Dawkins, who was a fast and technical threat from the wings. Mercifully, he's in the EPL now. This season, Chavez has the chance to replace that productivity, which is why it'd be especially helpful to Seattle's cause if he's out this weekend.

They're also very good at the other end of the pitch. Victor Bernardez is a titanic central defender who owns the air and is also very good with his feet. Steven Beitashour is one of the best right backs in the league. If they have a weakness, it might be in the center. Rafael Baca is a good playmaker, but Sam Cronin is primarily in charge of holding possession in the midfield. He should be easy to outnumber and overwhelm if Seattle can keep good possession players like Osvaldo Alonso and Shalrie Joseph running through the middle. That'll especially be the case if Chavez is out and the flank play is weakened.

Here's the average position map from that Toronto match: 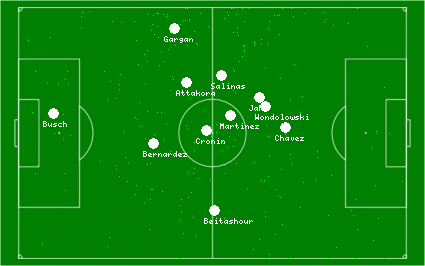 Feel free to sub in Lenhart or Gordon for Jahn there. They're set up as like-for-like replacements for each other. Note how tight the wings pinch in to help cover the middle. If that happens in Seattle, good passes out of the midfield can exploit gaps left behind on the wings. That will probably lead to a lot of crosses from the wings by those open wingers. Seattle has gone to that well a little too much in that last couple of seasons, but if Rosales has returned to form it can still be a dangerous weapon. Still, we only have one consistent target for those crosses and Bernardez is a bear to get through. Seattle will probably have an easier time cutting in from the wings to the box or crossing those balls low back to the box rather than relying on high crosses to heads.

At the other end we have to first and foremost deal with Wondolowski. That means excellent communication between the defenders, and it's going to be a challenge for DeAndre Yedlin and Djimi Traore, who are both new to the club this season. It was Yedlin who was the closest defender to Wondo when he scored the game winner against Seattle in San Jose earlier this season. His recovery speed is a good defensive crutch against wingers, but Wondolowski just needs a little space to get his shot.

For that reason I wouldn't be at all surprised to see two of San Jose's three big men start at forward and Wondolowski slotted in as a winger to harry the fullbacks for space. That would also help them deal with a potential Chavez absence without too much dropoff.

Seattle's attack is still very sensitive to injury problems. The official report has Obafemi Martins and Steve Zakuani still listed as questionable. David Estrada is healthy again and was a workhorse against Sporting Kansas City, but didn't create much in the attack. Eddie Johnson is the most reliable attacker, but if he started he'd be playing three full matches in 8 days. With the wing space we're likely to see, this might be the match to slot in Eriq Zavaleta or Will Bates to provide more presence in the air. Bernardez can't cover two players and Nana Attakora will be easier to win headers off of.

It's easy to feel that the team is running hot right now after good results, but it's really the defense that's been reliable (outside of Danny Cruz). It took a goal from a central defender to break through Sporting and overall the team only has three goals from forwards all season.

Still, a team this talented has to break out some game. This would be a perfect time to lay down 3 or 4 so we don't have to sweat it even if Wondolowski gets another wonderstrike. And that would continue what's turned out to be a very successful May, which on paper looks like the hardest month of the year. It only gets easier from here, so coming in to June strong could make the horrible start to the season a distant memory.