Before the moments of brilliance, it's the little things that make it possible.

Look closely at the buildup to each of the Seattle Sounders' last two goals and you'll see at least one interesting similarity: Both started by winning a second ball. That's not to say either of them were necessarily "counter-strike" goals and neither really came in transition. But neither would have been possible if not for some dogged work in the midfield that created turnovers.

In both cases, you'll need to have MLS Live or some other replay ability to catch the goals because neither is caught in the highlight, so I'll walk you through them.

This was actually a very long developing sequence of events that took close to two minutes to fully come together. It starts right around the 63rd minute mark when Michael Gspurning puts a ball back into play. Mario Martinez wins a header to get possession, but the Sounders are shortly forced to restart when Djimi Traore passes it back to Gspurning.

The Sounders aren't the first to that ball, but they are able to control possession again. The pass it around the back again, including another Gspurning touch, before Traore puts a ball forward that Brian Carroll gets to first in the midfield.

Again, the Sounders jump onto the second ball and this time really turn it into something. Leo Gonzalez picks up the loose ball and moves into the attacking half with a pass to Martinez along the right sideline. There's then some nice interplay between Martinez, Gonzalez, Eddie Johnson and Brad Evans. The key to the entire sequence comes when Martinez receives the ball from Johnson, while Gonzalez starts to make his run on the overlap.

To his credit, Martinez sees this developing and feeds Gonzalez as he's streaking toward the endline. Even though Gonzalez doesn't handle the pass particularly well, he's able to run onto it. While he's doing that, a trio of attacking players are starting to create trouble for the Union defense.

Johnson alertly switches his field and makes a run to the far post, creating what will be a set of decisions for Union defenders to make. 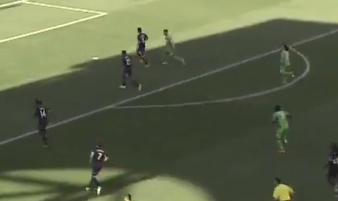 Although there are four defenders in the box and three all around the goal, two Sounders are left entirely ummarked at the far post.

At this point, all Gonzalez had to do was get the ball over MacMath's head for the Sounders to have a wide open net. That's exactly happens, as Rosales and Johnson both converge on the ball at exactly the same time.

The final scoring sequence was actually quite pretty. All but two players -- right back DeAndre Yedlin and Lamar Neagle -- touched the ball at some point. The final sequence was a 10-pass buildup that was a clinic in passing and moving in tight spaces. Here's how the whole thing looked to Opta: 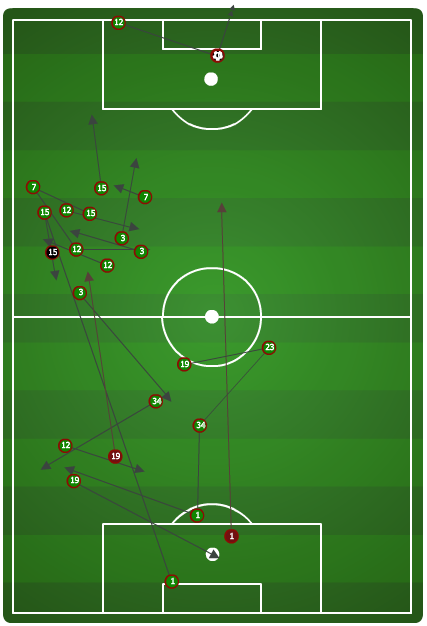 As we all know, the actual scoring sequence is pretty simple. Zach Scott makes a low throw-in that Brad Evans flicks into the box (look, he swears he got touch and I don't see any reason not to believe him). Aurilien Collin then whiffs on a clearance and Djimi Traore does the rest.

What made it possible was a couple heady plays in the midfield, though.

The first comes almost immediately after Johnson re-enters the field and picks up a horribly errant pass from Collin. The Sounders aren't able to do much with it immediately, but win the ball back when Servando Carrasco is the first to pick up another errant pass.

That one gets the counter-attack going, with Evans dribbling hard down the right sideline. He wins the throw-in when Seth Sinovic knocks the ball out of bounds.

The replay of the throw-in does seem to show Evans getting a foot on it before CJ Sapong can. What's remarkable is the KC defensive positioning. There are fully 10 KC defenders on the near post side of the penalty area and somehow, Johnson is wandering completely alone at the far post.

Obviously, Collin needs to clear that ball and whiffing on it is completely inexcusable but even after he did Traore was surrounded by KC defenders. If Traore had let the ball go through, Johnson had no one around him still. 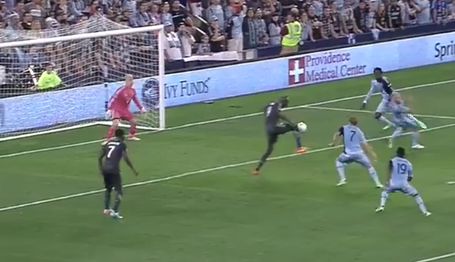 Clearly a lot had to happen for the Sounders to score both of those goals, but the ability to win the second balls can't be overlooked. While much of what happened is "in the moment" type of stuff, getting after loose balls is something that Sigi Schmid constantly talks about and is one area he always points to when the team is struggling.

Let's hope that results like this keep them motivated to do those little things that lead to big moments.