Seattle Sounders FC’s offense fired on all cylinders on Saturday, finally fulfilling the promise that a roster with its ability gives every time it steps on the field. Hometown hero Lamar Neagle ran the show, scoring his first two goals in rave green since his hat trick in 2011. 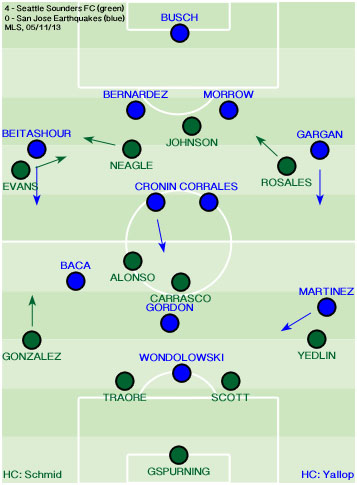 SEATTLE — Matches between the Seattle Sounders and San Jose Earthquakes normally result in slugfests. Tactically, Saturday's 4-0 match was one of the more dynamic in recent history involving these opponents.

Some personnel rearrangements on both sides resulted in empty-bucket 4-4-2 formations for each team. Seattle's Osvaldo Alonso and Servando Carrasco reprised their complementary roles from Wednesday's 1-0 win at Sporting Kansas City, and San Jose moved Rafael Baca out of the middle to wide on the right, sliding Ramiro Corrales in to play alongside Sam Cronin.

The difference in this match came in the way teams utilized the space opened up by not having an attacking player underneath the strikers. Seattle's front four players — Eddie Johnson and Lamar Neagle at forward, Brad Evans and Mauro Rosales out wide — interchanged and moved more dynamically than San Jose's quartet. 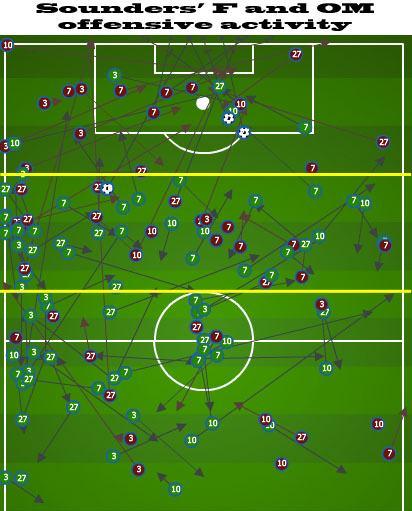 At times, the Sounders' top four held even spacing horizontally, and the majority of their offensive-minded activity occurred within the same space under the penalty area. The forwards held deeper than usual, while the wingers tucked in often, all four crisscrossing at about the point a central attacking player would normally operate.

This may be the solution Seattle has been looking for.

In previous matches, with forwards stretching high and wingers staying wide, the gap in the middle loomed large. Without somebody there to connect the top and bottom parts of the lineup, the Sounders struggled to get any offense going through the middle of the field.

The Sounders' former struggles in that area were on display again on Saturday, but on the opposite end of the field. San Jose's scoring chances came primarily from crosses into the box (the Earthquakes had 22 open-play crosses to the Sounders' 12), with little created in the middle. Any ball Chris Wondolowski or Alan Gordon received when they checked back usually ended up played backward or sideways.

Underneath the top four, Carrasco and Alonso held firmly. Their defensive activity compared to San Jose central pair Sam Cronin and Ramiro Corrales' told a similar story in terms of each team's offense: Seattle utilized the deep central space much better than San Jose, whose attempts were broken up time after time in that area. By comparison, San Jose won the ball more often in wide areas. 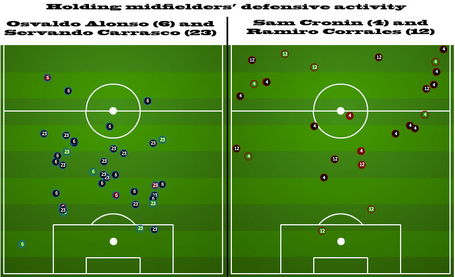 Carrasco and Alonso on one side and Cronin and Corrales on the other occupied pretty much the same space. Neither strayed too far from center, except when Baca moved in as Corrales was substituted. Cronin pushed up the most out of all four, but he struggled to get much going for San Jose offensively. Both teams' relatively deep lines of defensive confrontation — at times inside their own half — didn't allow for much play through the middle of midfield.

When Shalrie Joseph is healthy enough to start, he will likely slot in next to Alonso. The only question that remains is where Obafemi Martins fits in when he is 100 percent. Despite Neagle's stellar performance on Saturday, the most logical answer is that Martins will take his place. When teams pay a player as much as the Sounders do Martins, he has to be in the lineup.