Inside the Numbers: How are the Sounders Passing?

Share All sharing options for: Inside the Numbers: How are the Sounders Passing?

Forgive the baseball analogy, but in many ways passes complete, passing %, and other such stats are very similar to a baseball player's batting average: a useful gauge, but an inherently flawed metric. Would you rather have a .320 hitter with no power or a .260 hitter who hits 50 home runs?

In soccer, passing stats are often misleading, as Devin Pleuler points out. Completion rates are often merely a reflection of the difficulty of the passes being attempted. Is it any surprise that Michael Gspurning completes only 62% of his passes with all of his booming goal kicks?

However, passing rates are still a useful metric to judge a team or a player's style. For example, the Sounders are mid-table in MLS in passes per possession (shameless self promotion). See below for a breakout of Seattle's passing stats nine games into the year (organized by usage rate). 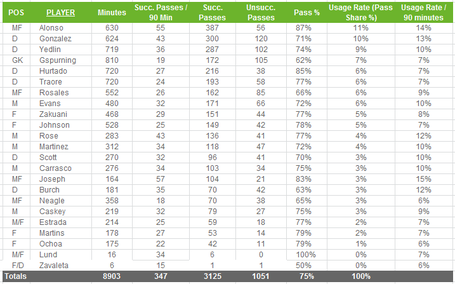 What do you think? Anything surprising or eye catching?