Scouting Report: Running With The Bulls

Third up in the murderer's row of teams Seattle faces this month will be the table-topping FC Dallas. But so far in May it's been Seattle doing the murdering. Can they keep it up against a hot team missing its most important defender?

Share All sharing options for: Scouting Report: Running With The Bulls

So far, the more pessimistic I've been in my scouting reports this month, the better the Sounders have done. So just in case there's some causation there..

FC Dallas are unstoppable. More Greek Gods than mortal men, they lay waste to all who would dare stand opposed to them on a soccer field. The horizontal stripes of their kit depict the layers of bloody bodies they have left behind them alternating with the salt they have sown into the fields they have conquered, ensuring no living thing will ever again emerge from that poisoned soil. The attacking trio of Eric Hassli, Blas Perez, and Kenny Cooper are the modern incarnations of Spartaios, Kronios, and Kytos — the three sons Himalia bore to Zeus. David Ferreira has the greatest soccer mind of our generation. Forget points. . if the Sounders emerge from Sunday with enough conscious players to form a functioning roster, that will be our victory.

Okay, with that out of the way, is Dallas really as good as its impressive record? Probably not, since keeping up their 2.18 PPG pace would make them the greatest side in MLS history, and they certainly aren't that. Their +7 goal differential is right in the mix with the other good teams in the league, tied with Houston and just behind the Galaxy. And their biggest advantage is a generous early schedule that had them playing only 4 road games in their first 11. In fact, they've won only one road game (over New England), so their gaudy overall record is a testament to how rarely they've had to do it.

Still, there's no question that they're a good team. They have an embarrassment of riches in attack, with Perez, Cooper, and Hassli all worthy of starting and Ferreira still one of the best CAMs in the league. And the speedy Jackson and Fabian Castillo lurking behind them are no slouches either. Basic math says they can't all play at once, and thus far the team has gone with a 4-2-3-1 with Perez up top in front of Ferreira and Cooper playing winger on one side with either Castillo or Jackson on the other. That leaves Hassli to play super-sub, which is a role well suited to his penchant for picking up cards at a decent clip.

The defense is also very solid. Onetime Blackburn Rovers target George John anchors the backline alongside Matt Hedges, Zach Loyd at fullback is a rotational US national team player, and Jair Benitez is an experienced left back and still dangerous despite his 34 years. In front of them the Brazilian Michel has solidified the defensive midfield nicely.

So they don't have a lot of holes. If there's any consolation for Seattle, it's that John won't be making the trip and he'll likely be deputized by recent PDL player London Woodberry.

Here's the average position map for their match against Portland: 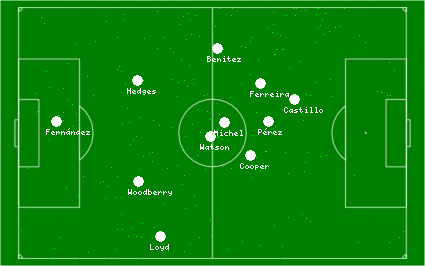 Despite Perez ostensibly playing up top, he's actually further back than Castillo on average. That's likely a function of him dropping back into the midfield to hold the ball up while Castillo's more likely to run into the box. And note how far upfield Benitez gets to fill the space that Castillo leaves at left wing when he goes forward. With Michel on the left side (and as a player initially brought in to play left back), he can drop back to cover for Benitez, leaving him free to overload the attacking left.

That will be a real test for the Sounders rookie right back DeAndre Yedlin, who'll be coming back from a red card suspension. Castillo is one of the few left wingers in the league who's fast enough to neutralize Yedlin's pursuit speed. The defender will have to be careful with his positioning to make sure he doesn't leave Castillo to run rampant behind him, particularly with Benitez coming forward and demanding his own mark.

At the other end, we have a chance to see the forward pairing we've been waiting for all season, with both Eddie Johnson and Obafemi Martins nominally healthy. With John out there's an opportunity to overwhelm a young back line, especially if Benitez gets too far forward and leaves the defense undermanned. Michel shifting to cover our right wing (presumably Rosales) would open up the middle and leave Dallas exposed to the two world class forwards and late runs from the central midfield.

I started the month saying that getting out of May with 3 or 4 points was probably a reasonable prediction (say a draw at Philly and a couple of home draws). Much of that was due to the team's terrible form when the month started, but also because the schedule was daunting. Now that we're at 7 with two matches to go, the month already has to feel like a success. If we could get that to 10 between this match and the trip to the Galaxy, we'll have effectively dominated our toughest scheduled month of the season going into a comparatively tastykakes schedule in June and July, which could set us up for a very comfortable position in the standings by midseason. And I'd much rather try to get those points this weekend than at Carson next weekend. So let's do that.