Obafemi Martins scored again on Saturday, but it probably never should have happened. Let's take a look at the many defensive breakdowns that led to a Nigerian flipping through the air.

When it's late in the game and a team is down a goal, defense isn't the first priority. But that doesn't mean they should ignore it. FC Dallas did just that on Seattle Sounders FC's final goal in a 4-2 victory at CenturyLink Field on Saturday. Obafemi Martins' goal was well taken, but Dallas could have prevented it from happening with some simple adjustments.

Yikes. Let's break that down. 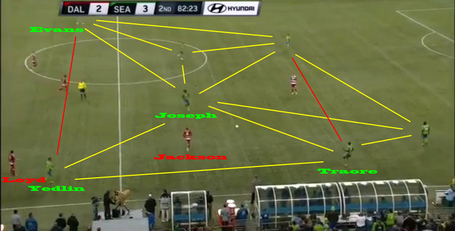 At the start of the sequence, Zach Loyd is stepped up from his right back position. He's marking DeAndre Yedlin, who has strayed quite a way from the same position. Outside backs usually have the freedom to step high, especially if a winger is checking back or has his back to goal.

For a team that needs a goal, only Loyd seems to be pressing for it. Look at the open passing lanes (yellow), and how many more of those there are than closed lanes (red). Notably, Jackson is kind of in a defensive no-man's land, not really pressuring the ball or taking any options away.

When Shalrie Joseph receives the ball, he could turn. He could switch the point of attack. He could do any number of things. 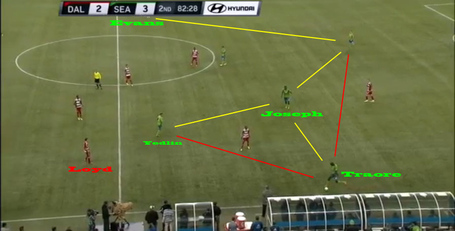 He decides to go back to Djimi Traore. Dallas players are starting to creep up, but still, none of them are really doing anything with their positioning. The team is also down a man at this point, so marking nothing is an easy way to let the man-up team take advantage of the space. As it is, six players are in or near the attacking half, leaving three plus the goalkeeper to defend.

Yedlin starts heading back to his starting position at right back, but Loyd just hangs out in the same space, marking a pocket of Pacific Northwest air. 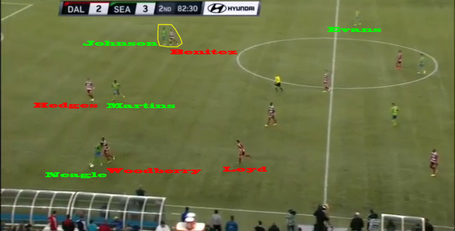 Traore finds Neagle with a long, slow, bouncing pass. London Woodberry, Matt Hedges and Jair Benitez are three-on-three with him, Martins and Eddie Johnson. So the defense is in decent shape.

In this situation, Woodberry needs to have the awareness to see that if he gets beat, his team will suddenly be numbers-down. All he has to do is either keep Neagle from turning (making him play backward and/or giving Loyd time to recover and double-team) or delay his attack, forcing him wide.

But he stabs in, and Neagle blows past him. Meanwhile, Brad Evans has nobody within 20 yards of him, and he hasn't this whole sequence. 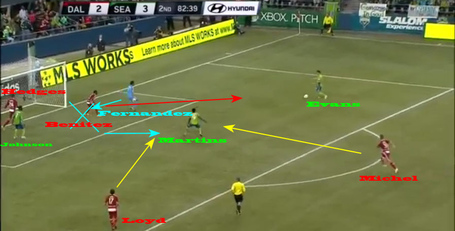 Johnson gets between the center backs, virtually unmarked, and Martins hangs back in the space he vacates. Raul Fernandez makes a good save on the initial header, but then his enthusiasm gets the better of him.

In this kind of situation — a player closing in on goal with an option to either shoot or pass — the first defender is responsible for pressuring the ball. The goalkeeper needs to get himself into a good position to stop the near-post shot and be prepared to charge off his line if the attacker plays the ball to his teammate.

The second defender (who is usually trailing the play, but in this case, Hedges is already back) is responsible for covering the far post. Anything shot to the far post will usually be on the ground and a bit slower than a hard, high shot to the near post that a goalkeeper (with hands) has a better chance of blocking.

Michel and/or Loyd can also help by getting on their bikes to mark Martins. But neither of them really get faster than a concerned trot on this play, instead of the all-out sprint they should be on the moment Neagle gets past Woodberry on the outside.

Quick review of this phase: Fernandez should stay home, Benitez should step, Hedges should cover the far post and Michel and/or Loyd should run faster toward Martins. 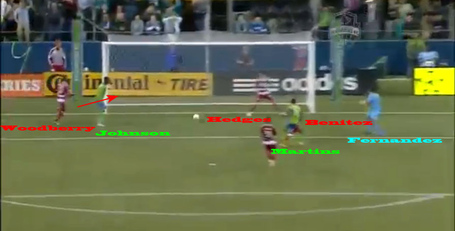 When Martins receives the ball, he has all day to pick his spot. Fernandez is nowhere to be found, completely outside the frame of the goal. Hedges slides to the near post, but Woodberry — as Benitez was earlier — isn't goal-side of Johnson, which would also allow him to cover the near post. At least Benitez pressures the ball, but Fernandez would be more effective because he can slide out with his hands. 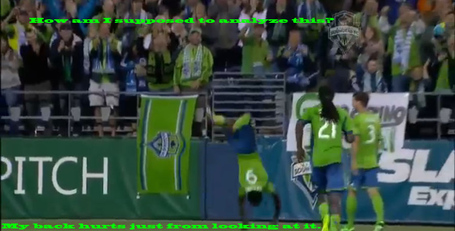