Galaxy Scouting Report: Why Does May Have To End?

It's been a tough month, but a tremendously successful one. The Galaxy are the last stop in what could be one of Seattle's best months in its history.

Share All sharing options for: Galaxy Scouting Report: Why Does May Have To End?

You know the drill by now. I start off a scouting report talking about how difficult this May schedule is. How difficult this next opponent is going to be. How Seattle would be lucky just to tie. And then the Sounders go get a win — recently, a crushing win. So, as is tradition:

The Galaxy cannot be beat. They are the golden children of MLS and will be given every opportunity to win. From 'assigning' Mexican legend Carlos Hermosillo to the team in 1998, to inventing the DP rule so the team could sign David Beckham in flagrant disregard for their previous love affair with parity, to quietly grandfathering Landon Donovan into the DP rule so they could play both for years before the rest of MLS could have multiple DPs, to begging the US national coach Bruce Arena to come save the club from mediocrity, to conveniently playing the MLS Cup final in LA for 5 of the league's first 15 years until they won it there, the league has shown every indication that whenever anything is amiss with the Galaxy they will parachute in and big daddy Garber will kiss their boo-boos until they're winning again. When playing against a team that uses the MLS logo as its alternate crest, the best you can hope for is a consolation point and a long night of drinking.

Okay, but for reals, Seattle has had its problems with LA. While everyone was talking up the incoming Cascadia rivalry as if we had eyes only for Portland, really they were focused further south at the teams that played for an MLS Cup in our stadium and then took turns kicking us out of the playoffs for the next three years. The Galaxy did that twice: once on an Edson Buddle golazo, and last year on a thrashing so thorough in Carson that you can't even hang it on a single moment. Last season we punked them at home for a combined 8-1 through three games, but they returned the failure with a 4-0 differential in two at Carson. The last time we beat the Galaxy in their stadium was in 2009.

So what about this edition? This will be our first match against the club in the post-Beckham era. That era hasn't gone perfectly swimmingly yet as they failed to replace Beckham's DP contract with another world class midfielder (rumored for some time to be Frank Lampard) and Donovan left for some extended 'me' time during the start of the season. No doubt that means MLS HQ is preparing the Don's parachute, but in the meantime they're vulnerable. They've lost three of their last four, and the one win was against the pretty hapless Philadelphia Union. Beckham's long bending service to Keane has dried up, forcing the team to rely on advancing the ball through the midfield on the ground. With Juninho potentially out with an injury, that may become even harder.

And of course the bombshell echoing over this match is the reported trade that will send Mike Magee to his hometown of Chicago and Robbie Rogers to Los Angeles. Both moves have major implications on the field, and in the case of Rogers — who just this year felt he had to retire once he'd come out publicly as gay — major implications off the field. But what effect does it have this weekend? There's a tradition in American sports that once a player's been announced in a trade, he won't suit up for his current club again. But there's also a tradition in international soccer of players having contracts set up months ahead of time and continuing to play for their current club. In this case, I think our tradition wins and it's very unlikely Magee suits up again for the Galaxy (editor's note: Magee won't play, but the Galaxy are hoping to get Rogers' ITC in time for him to). And in the other direction, Rogers hasn't played in a competitive match since last year and even if he's kept in shape, there's no way he's game fit for this weekend. So Seattle may be the beneficiaries of a gap between the two players. I wouldn't be surprised to see Rogers come on for a few substitute minutes to introduce himself to the fans. And speaking for myself, I'd be proud if Rogers made his return to the field as an out player with our players on the field with him.

Here's the average position map from their loss at New York last week: 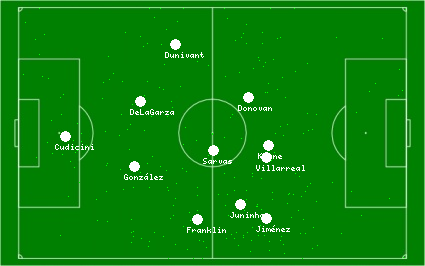 Jose Villareal has become the preferred partner up top for Keane, which has been working out well. The high-energy young forward complements Keane's wandering poaching style nicely. Here Donovan played on the left and cut in aggressively away from the wing. If DeAndre Yedlin starts, he'll have some interesting decisions about whether to cut in and track Donovan or whether to hand him off and use the wide open right back area to provide freedom for his own unmarked runs forward. If the Galaxy get caught out on a counter with both Yedlin and Mauro Rosales overloading Todd Dunivant, that could create some dangerous opportunities for Seattle. And given the strength of the Galaxy's very stable backline, that might be the best route for opportunities if Seattle can't just overwhelm them with attacking talent.

And the Sounders will be probably be without Osvaldo Alonso, arguably their most important player. This season his loss might be more manageable than it has in years past, since Servando Carrasco has stepped up his game and played well in consecutive starts, and Shalrie Joseph provides a very skilled, veteran presence in the same role. One of them playing well will be important to neuter any attacks through the middle (made easier if Juninho is out). That would force them to revert to long balls for entry into the attack, and Seattle's back line can do a good job of cleaning those up over Keane and Villareal.

Seattle's main roster issue, other than Alonso, is fixture congestion. With a match a few days later on the other side of the country, followed by another match next weekend in LA, Sigi will have to do some lineup juggling. There've been spirited arguments in the comments about how you prioritize these three matches. The US Open Cup match is a knockout game, and a loss there obviously can't be recovered from, whereas a league loss is just part of a long campaign. On the other hand the Tampa Bay Rowdies are the weakest team they'll face (though I appreciate the Chivas jokes) and are more likely to be handled with reserves. Another argument is that LA is likely to make the playoffs anyway, so a win over Chivas could help remove a competitor for one of the other playoff spots.

In the end, none of the matches are simply puntable and I think we'll see a mix of starters and reserves in all three. Something like Rosales on the weekends, maybe Alonso next week, Neagle in Tampa, and so on. Seattle certainly has the depth to be competitive in all three, even in a season where we felt we were sacrificing depth for topline talent.

Tomorrow, the focus is on beating a Galaxy team in transition. If we can do that, one of the toughest months in the Sounders history will become one of their most impressive triumphs in their history, recovering emphatically from a dire opening to the season and setting them up for a customary run into the playoffs over the summer.