Sounder at Heart’s tactician, Liviu Bird, played goalkeeper in another lifetime. In this latest installment of Tactics Analyst, he takes a look at something the Sounders’ main man, a 6-foot, 5-inch Austrian, is much better at than he ever was: dealing with crosses.

A big indicator of success in Major League Soccer for goalkeepers is how well they deal with crosses and aerial challenges. It's one of the reasons I was never cut out to be an MLS player: I just didn't have good enough command of my penalty area.

It looks simple enough — just reach over an attacker's head and grab the ball; you've got hands, he doesn't. But in reality, crosses are about making several split-second decisions in quick succession, and the longer you wait, the worse your odds are of coming out on top.

The basic aspects of claiming a cross are, in order:

Those eight steps all happen within two or three seconds on some plays. The time between steps is anywhere from minutes (goalkeepers should constantly adjust their positioning, depending on the location of the ball and his teammates) to milliseconds (assessing the drop zone and deciding whether to make a play on the ball). Let's break down each step.

Often, none of the steps after this first one are possible without proper positioning. Every goalkeeper will have his or her own comfort zone, depending on their experience, size, the field conditions, weather and a multitude of other considerations. As with everything related to the position, I can only give some general guidelines in this area. As I tell the goalkeepers that I coach, you take a little bit of input from every coach you have, and if it works for you then use it. If it doesn't, then leave it on the training field and don't take it with you.

The following diagrams are far from perfect, but the general differences between them apply pretty universally. For instance, if the crosses are swinging out — as they normally do in the run of play with left-footers serving from the left flank and right-footers from the right — the goalkeeper can be a little higher off his or her line than if it is swinging in.

With in-swinging crosses, getting beat at the near post becomes a much higher concern than if the crosser sets up to swing a ball out. Also, if the ball is swinging out, the goalkeeper will have to come higher off her line to claim the ball.

Assessing path and pace of the ball

The assessment step can also be called "reading the cross." As an outfielder tracks a fly ball in baseball, the goalkeeper must see the ball off its point of origin and almost immediately figure out where it will drop.

This is where a goalkeeper's inexperience shows. Younger players will have to get it wrong many, many times before they can begin to read the ball correctly. Even older players coming into preseason have a hard time with this step. It was always the last thing to come back to me when I started training again after a break.

One way to measure this is by watching a goalkeeper's movement. If he reads the crosser's body language correctly, he can begin to move toward the drop zone a split second before it leaves the opponent's foot. Watch Nick Rimando cheat toward the middle on this cross in last year's playoffs. He can sacrifice positioning a bit because Mauro Rosales never looked like he would shoot to the near post — he was looking toward the middle the whole time.

The single most important decision a goalkeeper will make on a high ball is whether to come for it or stay on her line. This is where goalkeepers like Rimando earn the big money, while others always seem to make the blooper reels.

It's as simple as asking this question: Can I get there before the attacker does? Variables include how much traffic is in the way, how well I read the initial ball off the crosser's foot and whether my defenders would have an easier time than I would in clearing the ball.

For example, if I'm Luis Robles, playing behind Jamison Olave and Markus Holgersson, I think I would stay on my line on a high, floated free kick from 40 yards out. Those big boys can more than hold their own in the air. But Robles made a different decision on this play against Toronto FC this season:

If he gets there and punches it clear, he looks like a genius. But it was always going to be difficult because of the distance he had to cover and the number of bodies in the way. Not to mention, Olave was in a great position to deal with it, but he had to back off once his goalkeeper came out.

Youth goalkeepers are often not loud enough, and a lot of them will wait too long before they shout "keeper" when they come off their line. The shout needs to come the second the goalkeeper has made a decision, not as he is beginning his jump. The alternative to "keeper" is shouting "away," which signals to the defense that the goalkeeper is getting back on the goal line to position himself for a shot.

When the goalkeeper shouts for a ball, defenders should not give up on the play, but they should be prepared to either duck or be clobbered by their own gloved teammate on her way to the ball.

Listen for Michael Gspurning's shout (Austrian accent and all) in this example.

A common phrase you'll hear coaches use when they talk about attacking the ball is: "Play the ball. Don't let the ball play you." For goalkeepers on crosses, this becomes vital.

To help you visualize attacking the ball, picture two additional goals: one on the near post and one on the far post. The goalkeeper should strive to keep the ball from crossing these imaginary goal lines.

A common training exercise I put my players through involves actually dragging another full-size goal to the far-post area (as in the diagram) and using a corner flag to simulate the second post at the near-post area. If I serve it to the near post, the goalkeeper must meet the ball in front of that imaginary line — ditto with the far post.

This is more important in dealing with balls at the near post than the far post. If the goalkeeper meets the ball in front of the near post (of the real goal), then even if he spills it, it will be in a less dangerous area than if he drops it in within the frame of the goal.

As you might expect, professional goalkeepers have much larger ranges than those who never quite make it. The blue above is about where I was when I stopped playing; the red is closer to Gspurning's range.

Here's an example of how this is done properly. Watch Sean Johnson get across Mike Magee to deny him access to this cross:

Here's a freeze frame of Johnson at the point where he meets the ball, in front of the near post — in fact, close to outside the six-yard box:

Not to pick on Robles, but here is an example of what could happen when a goalkeeper fails to attack the ball. Chicago is known as the Windy City for a reason, and it gets the better of the veteran on this play:

Along with attacking the ball, the goalkeeper must meet the ball it her highest possible point. This is all about using your hands to your advantage as a goalkeeper. No matter how short the goalkeeper, her hands can almost always reach higher than a jumping attacker (aside from maybe Darren Mattocks).

For example, watch Jon Busch get up to claim this cross at the top of his six-yard box. Here's a still image of the point of contact: 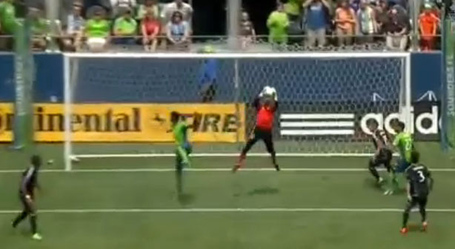 Shorter goalkeepers can make up for a lack of size with insane athletic ability. Busch and Rimando are two of the shortest in the league, but they have as good of a command of their penalty area as the lanky Gspurning and Donovan Ricketts. In between, Joe Cannon and Dan Kennedy also do well.

Coaches will teach their goalkeepers to jump off one leg, driving the opposite knee up. This serves two purposes: it protects the goalkeeper from oncoming attackers, but more importantly, it helps him get up higher. A two-legged jump is normal on crosses toward the back post because it's difficult to drive the knee up and might actually hinder momentum in that situation.

At the very last second, the goalkeeper has one more important decision to make regarding the cross: whether to catch, punch or parry. The biggest factor in this decision is how much pressure the goalkeeper is under. With an attacker in her face, she would be well advised to punch. Under no pressure, catching is more comfortable. In rare instances that usually involve stretching for a ball, the goalkeeper can parry it, continuing its momentum away from goal with a well-placed finger jab.

The easiest way to illustrate this is with some examples. Watch Rimando here, Perkins here and Cannon here. Now, take a look at the point of contact on Perkins and Cannon's crosses: 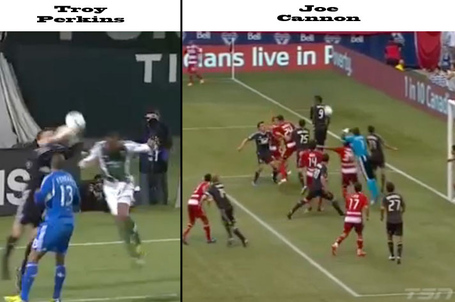 Both are under considerable pressure. Perkins has an opponent in his face when he meets the ball, and Cannon has all sorts of stuff going on in his six-yard box. Both made the correct decision to punch.

Here's a freeze frame of Rimando's punch, just after he meets the ball: 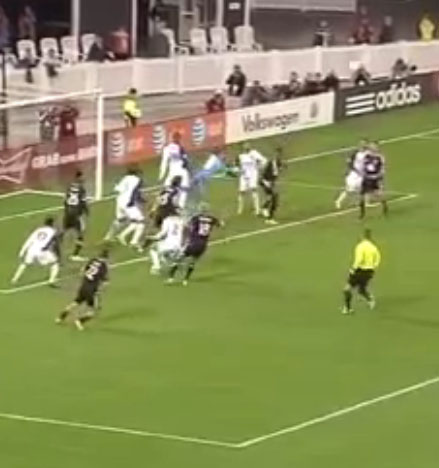 He elected to punch the ball despite having quite a bit of space and nobody around but two teammates bookending him. Maybe he saw the ball late. Maybe it swerved in flight, and he wasn't sure he could get a good handle on it. But from my vantage point, I think he could have caught that one. At the end of the day, the decision has to come from the goalkeeper, and this vital decision will depend on his comfort zone.

Finally, when the hard work is done, the goalkeeper needs to keep moving through the point at which she meets the ball. Scroll back up and watch Johnson run through Magee again to illustrate this point. If you stop your momentum at the point where you meet the ball, at some point, you'll meet an attacker who has notions of making his presence felt by running over the goalkeeper.

This part is about safety, but it's also a mind game. No attacker in her right mind will want to go up against a goalkeeper again after she gets clobbered the first time. Best-case scenario, it will give the goalkeeper more room to operate, with attackers unwilling to risk the alignment of their faces against a crazy keeper.