Union Scouting Report: Back With A Winning Taste

The Sounders travel to visit old friends Jeff Parke and Sebastien Le Toux, and they have the talent and will to come back with three points in their luggage.

Share All sharing options for: Union Scouting Report: Back With A Winning Taste

The 2013 season hasn't been particularly kind to the Seattle Sounders so far, and neither has it been kind to the Philadelphia Union. Their three wins look a lot better than Seattle's one, but they come with the caveat that they were over the Rapids, the Revolution, and DC United — three teams hovering around the bottom of the table (we'll gloss over the fact that their next match also comes against a team near the bottom of the table). The defense has been a particular problem and has earned only one shutout all season — against punchless New England. Then that same Revolution came back and scored 2 goals to beat the Union last week — the only game all season in which New England has scored more than once.

Those mixed results have left them alongside Columbus in a sparse middle ground in an Eastern Conference that's otherwise split between four very good teams (Houston, New York, Montreal, Sporks) and four teams that look like they'll struggle to make the playoffs (Chicago, New England, Toronto, and DC). Of course it's early yet, but if the Union are still struggling to keep pace with such a comparatively easy schedule, they'll have to pick up their game to stay in contention for a playoff spot as things get tougher with 13 matches against those top Eastern teams, plus the Galaxy. Otherwise they could cede that last playoff spot to the Crew.

That unsettled defense will receive particular attention tomorrow, since it includes Jeff "Sparkles" Parke, who was a solid center back for Seattle over three seasons. Seattle's own defensive inconsistencies (real or imagined) have led some to suggest that Parke leaving was a bigger blow to the team than we anticipated or that we can absorb. But the Union's even more significant defensive troubles suggest that creating a consistent defense is more complicated than any one player.

Here's their average position map from that 2-0 loss to the Revolution: 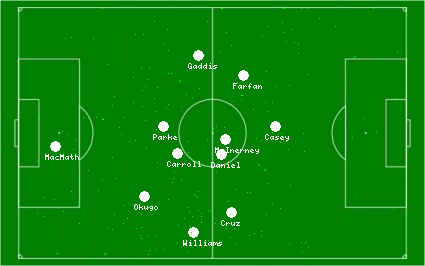 That's probably best described as a 4-1-3-1-1. Jack McInerney looks to be playing on the same line as the midfielders, but he's really a forward who's dropping back to pick up the ball. Conor Casey is deployed in his familiar role of target forward in a new location after parting with Colorado, where he built his career as one of the best big forwards in MLS history. Casey's role thus far has been to create space for and provide service to McInerney, who's lapped it up to the tune of 6 goals — tied for the league lead.

The good news for opponents is that if they can shut down McInerney, they can shut down the Philadelphia attack. Casey is next on the team with two goals and no one else has more than one. That's easier said than done, as McInerney is mobile and pops up all over the offensive third, but that's a perfect opportunity for Osvaldo Alonso to demonstrate why he reamins the best CDM in the league.

At the other end, the actual defense is reasonably solid despite the team's overall defensive woes. The problem is really the midfield, where Brian Carroll is a makeshift CDM and Keon Daniel doesn't have the presence to control the central midfield for an entire game.

For Seattle, this is a chance to build on some long awaited success. After stumbling through an early season picking up no wins despite playing well, they finally got a win in Colorado despite being outplayed for most of the match. That's soccer.

Much of that stumbling has come because a team that looks fantastically talented on paper can't actually get all of that talent onto the field. Notably, the potentially league best forward pairing of Obafemi Martins and Eddie Johnson haven't had any time to pair and for significant stretches we've had neither at all. This week the pairing is expected to be unpaired again as Dave project the starters to be Johnson and Lamar Neagle, and I have no reason to doubt it. The good news is that Neagle has emerged in the last couple of games as a major offensive contributor. On a team with a bunch of talented attackers who tend to wait around for someone to give them good service, Neagle is willing and able to create chances out of nothing with pressure and persistence.

The defense and midfield should be solid as always. A holding midfield group of something like Alonso, Shalrie Joseph, and Brad Evans is also one of the league's best at its role. Against an already questionable Union midfield, they should dominate possession in the middle of the park, even on the road.

That would be a welcome development, because the Sounders' apparent transition to some kind of counterattacking team has been frankly painful to watch. When they win possession in the midfield, a third of the players rush forward for the counter, a third stand in place, and then the ball carrier backpasses to the defense. Maybe the long term vision of this team as a countering team is correct. Odin knows we've been beat by enough of those teams to see its merits. But the transition so far has been a mess, especially without Fredy Montero — who was an integral part of Seattle's counterattack in years past. So I expect that being our typical possession team is the best route to victory in Philadelphia this weekend.

And a road victory would do much to paper over that terrible season opening run. Eight points in seven would put us 6th in the West by PPG as it now stands, just outside of a playoff spot. That doesn't sound great, but compared to being in the basement for a month it'd feel pretty good. And it'd be an important opener in a May that's going to be pretty brutal in the coming weeks. Points will be hard to come by, so we need these.