What type of team are the Sounders?

A statistical look at the league as a whole will probably surprise with its classification of Seattle Sounders FC as a short passing team that attacks through the middle.

Share All sharing options for: What type of team are the Sounders?

Classifying systems is hard. The eye test led to the nomenclature of Sigi's Game. This developed into a crossing intense system, particularly in 2012 and early 2013. Lately the attack is more direct and intermittently effective.

But there is another way to classify systems. Until today using statistics and league averages was difficult to do for Major League Soccer. Then WhoScored.com launched their coverage of MLS. It is very data dense. Figuring out what matters and what doesn't will take time and a willingness to be wrong.

Built out of data that should be familiar to Sounder at Heart readers the team summary has the first surprise. 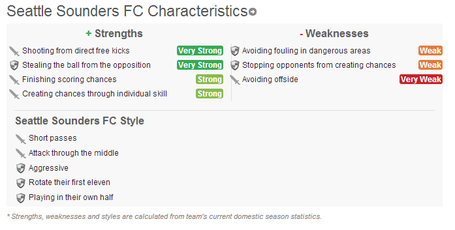 That line at the bottom may be most important. This is built out of league data and compared to the league. Comparing the Sounders to Arsenal or Barcelona serves a purpose when talking about how to do things in the future, but comparing them to the Galaxy, Goats and the rest is more useful in the day-to-day of an MLS analyst.

You can actually look at the data and see which players are most effective at the long ball - it's Osvaldo Alonso. In fact Osvaldo Alonso is just awesome. Look here and search for his weaknesses. We'll give you a moment.

Yes, SaH recently stated that Alonso is amazing. That's because it really is true. He is in fact rated through WhoScored as the second best player in the league. Seattle's defense actually rates quite well.

Again, it will take time to sift through all the data and figure out how to apply it in previews, recaps and season long analysis.

But an initial look at Chivas USA shows that their old style and weaknesses (these may change with a new coach) are vulnerable to what Seattle does well.