Chivas USA is a five-lane freeway pileup right now, giving Seattle the opportunity to get back on track for the regular season, or alternately to prove that they can't beat anybody right now.

Like a new father who's trying to play his first game of catch with his child and is forced to move closer and closer after each wild throw until his glove is inches away from the ball, the soccer scheduling gods have been forced to put the Seattle Sounders on easy mode. The week started with a road trip to Seattle's personal chamber of horrors where they faced the defending champions and promptly got played out of the building. So things lightened up a bit with a game against a second division side, though one on a crap pitch after a long trip in heavy winds. So Seattle managed to screw that one up as well. Now the soccer gods have thrown their arms in the air and said "Fine. Here, here's a road match against a team in total disarray, that hasn't won since March, and who just fired its head coach and will be managed this week by an Academy team coach. Think you can handle that one, champ?"

Ah, Chivas. One of the best things about their hot mess of a team is that it renders a scouting report pretty pointless. Who will play? Who will even be on the team? Maybe they'll trade away Dan Kennedy the morning of the match. I don't know. . you don't know. It's Christmas in spring every day here. How does Sacha van der Most like to set his teams up? Maybe we can dial up a Chivas U16 match and find out.

Speaking of their U16 team, they totally dominated their USSDA division behind the 22 goals of Caleb Calvert. But something tells me young "Caleb" just doesn't have as much of a future in Chivas' "new direction" as maybe his teammate 17-goal-scorer Jorge Ruiz, wink wink racism wink.

Ah, what the hell. Here's an average position map, from their 2-0 loss to Colorado last week: 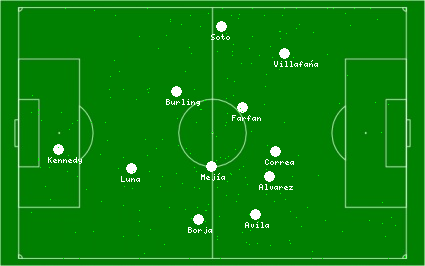 To my knowledge all of those players are still on the team, even Bobby Burling — wink wink "back to our roots" wink. The wisdom of playing effectively a 4-2-4 on the road is worth questioning. Clearly Chivas has wingers — and fullbacks. . and midfielders — who like to get forward. That has no doubt contributed to their league-leading 24 goals allowed so far this season. Early in the year when Chelis was widely acclaimed as a mad genius the team was winning despite allowing the goals. All three of their wins came in march and none was a shutout. But lately their wild attacking style hasn't even resulted in goals, with only 3 scored in their last 7 matches.

In my glory days of Seattle CoRec soccer we would a few times a season be matched up against a talented but undisciplined team on which every player (other than maybe one poor sweeper) liked to bomb forward into the attack, because. . hey. .scoring is fun. So naturally we'd stick our two fastest players up front and lob clearances all match and get 10-15 breakaways and score 7 goals. Now, I'm not sure how many lessons can translate from local amateur soccer to the pros, but if any apply they'd apply to Chivas. And I suspect that team maybe does a little too much running toward the opposing goal and not enough defending. Though notably both of Colorado's goals last week came from relatively slow buildup rather than breakaways, so they're not particularly good at defending that either.

Or, courtesy of the new data from whoscored.com:

So Seattle: a strong team that's having a terrible time actually getting its roster together. This week international absences cost us Eddie Johnson and Brad Evans. Undisciplined play will cost us Shalrie Joseph. Injuries will probably cost us Steve Zakuani and Osvaldo Alonso. Fatigue from the midweek match and long travel will take its toll as well, leaving us with a mix of starters and regulars. But Seattle should not need its starters to beat this Chivas team. An away win would, despite the bed pooping against LA last week, cement this as one of Seattle's strongest league starts through May in its MLS history. A loss would cement this as probably the worst week in their MLS history. So no pressure.

Sounders at Chivas USA - It's a trap!