In a match that will be remembered for cards and confrontations it is Mauro Rosales play that deserves praise.

Road points in MLS are not easy. Grabbing that single point will not go down as a success, but instead as a necessary collection. Call it "buying flour" when grocery shopping. It is not glorious, but necessary. The Sounders now sit in the middle of the road table. There were few moments that seemed special, for either side, but a two-two draw showed that Seattle Sounders FC can get a win in circumstances that are not favorable.

The lineup started with Alonso out due to having a child. Martins, Joseph and Zakuani all have injury issues that kept them out of the 18. That didn't matter for the first dozen minutes or so while Mauro Rosales would own the right flank at the same level he did when he was a fringe MVP candidate. His assist would not come from open play, but a corner delivered perfectly to Eddie Johnson. EJ's header would slam into the goal area in a way that forced MacMath's play on the ball to happen inside the net. Seattle would be up one-nil. 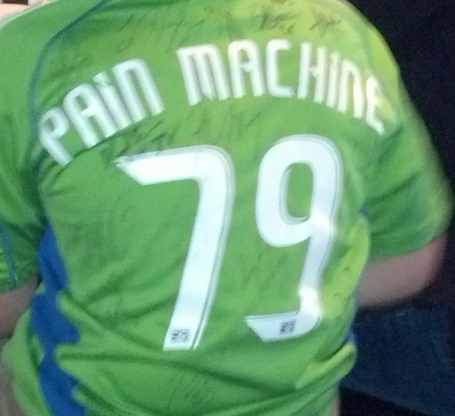 A tentative stance would be taken. The Sounders rolled back reducing their attack, trying to defend and opening themselves to the attack from Philly. The Union would lose Jeff Parke to injury and still stand strong defensively despite having half of the backline playing out of position. Seattle would not threaten again for about an hour of play.

The Philadelphia Union would strike quickly, dismantling the defense through passing and persistence. Shortly after half Danny Cruz would score not once, but twice. It would make the passive approach look deservedly foolish. Despite owning the flanks early the Sounders would cede control. As the match went on they would lose the center as well.

Down a goal, on the road Seattle would find a way to snatch a point. An aggressive attacking substitution was made bringing Mario Martinez in for Caskey. The left flank became a route to goal. A sequences of passes would develop along the left that led to Mauro Rosales getting an easy goal. He would leave soon after.

And then chaos ensued.

On the Sounders strongest counter in some time Sheanon Williams decided to give a shove to Lamar Neagle well after a whistle. Neagle would respond with a shove to Williams face. And then chaos would start. EJ and MacMath would enter the scuffle. Reds would be given to both Neagle and Williams. Cards could have been handed to either Philly's keeper and/or GAM. Tensions were clearly ratcheted up.

DeAndre Yedlin would go in with two feet from a rear position to earn the third Red of the match. Johnson would linger after a harsh tackle to make a point and get his Yellow on the afternoon. While these were the only cards after the scuffle, there were also only eight minutes or so to collect them and both sides acted as if they wanted to use the final moments to get some.

Play disintegrated. The last 10 minutes or so was not good soccer from either side. It was a desperate moment of players action going beyond the field of play and channeling their emotions in ways that would not result in positive play.

It would not matter. The score ended two-two. Rosales had a goal and an assist in his best match in many months. Eddie showed what he can do when focused and when distracted. A squad weakened showed that they could survive in a hostile environment and get a point while weakening themselves for the future.

There was not an improvement. There were two goals and a point. It is good enough in the near term.