After a week off, it was much of the same for Seattle Sounders FC offensively in its 2-2 tie with the Philadelphia Union. The style of play from early in the season is starting to become a pattern, and it looks like something Sounders fans will have to live with — at least when Osvaldo Alonso and Shalrie Joseph aren’t in the lineup.

Share All sharing options for: Tactics Analyst: Sounders escape Philadelphia with a point 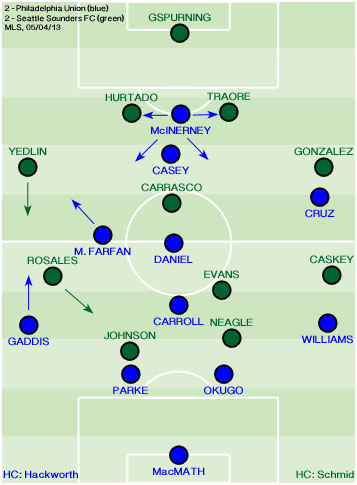 Injuries plagued the Seattle Sounders' starting 11 against the Philadelphia Union on Saturday despite nearly two weeks since their last league game. Osvaldo Alonso and Shalrie Joseph were the most conspicuous absences.

The formation was familiar, but Brad Evans and Servando Carrasco couldn't keep control of the game as well as Alonso and Joseph have shown this season. Lamar Neagle dropped into midfield often to find the ball as a result, leaving Eddie Johnson to fend for himself up top.

Philadelphia had a similar look — and similar problems — in its 4-4-2 with one holding midfielder. Brian Carroll held the fort in front of the back line, but Keon Daniel couldn't find the decisive pass from his more advanced position.

In the end, a tie was probably a fair result, although the Union created more opportunities in the run of play. Seattle dominated set pieces, Johnson just missing a second goal on a corner kick by inches in first-half stoppage time.

Islands in the sea

Johnson is a good target striker — fast, strong and good at holding the ball under pressure. But if Seattle plans to use him in that role, it should provide some support.

Especially early on, the defenders played a lot of long balls into Johnson's area, mostly into space for him to run onto. He and Jeff Parke matched up several times in the early going.

For the Sounders, it was a look that fans are used to by now this season: long balls from the back, either skipping the midfield or played to the wingers into space. 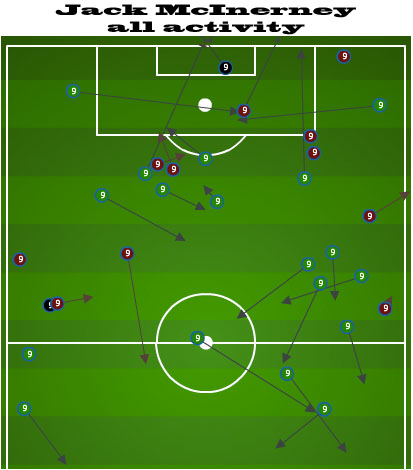 On the other end of the field, April MLS Player of the Month Jack McInerney played the target spot a bit differently. He started high, but he drifted around all over the place. Usually, strikers who stay within the frame of the goal have a higher success rate in terms of finishing, but McInerney is an exception to that rule.

He drops deep to find the ball, laying it off for a wide pass to be served into the box, where he tries to get on the end of crosses. It has worked for him so far this season, to the tune of six goals in nine games, but not on Saturday.

Seattle's most dangerous looks came from corner kicks and crosses into the box. Both teams had similar plans, as the Sounders attempted 314 passes and the Union tried 392, but Philadelphia launched 28 open-play crosses and Seattle had just nine.

That speaks somewhat to the Sounders' struggle to get the ball forward at PPL Park. From looking at the distribution map, it seems Seattle didn't get the ball much in advanced areas, wide or central. Philadelphia's map, on the other hand, looks almost the exact opposite.

Keon Daniel attempted mostly square passes, rarely looking to get in behind the defense with a ball. He was 43 for 50 in his attempts, but he didn't get much going forward. Wide players Danny Cruz and Michael Farfan had more luck getting the ball in the middle from their wide positions. 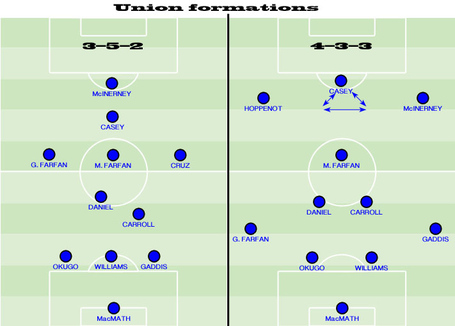 The Union came out in a standard 4-4-2, but that changed with Jeff Parke's injury just before halftime. Gabriel Farfan came on, and he took up a midfield position to start the second half. Amobi Okugo, Sheanon Williams and Raymond Gaddis comprised Philadelphia's new back three in the Union's 3-5-2.

It paid dividends almost immediately, as Danny Cruz took advantage of two early opportunities to put Philadelphia in the lead. After that, Gabriel Farfan retreated, his brother took his spot on the wing and the Union went back to 4-4-2.

Late in the game, after Seattle equalized, Philadelphia pressed for a winner.

As Antoine Hoppenot entered — and until red cards started flying — the Union went to a 4-3-3 with a dynamic top set. Daniel and Carroll held behind Michael Farfan, and Conor Casey took up more of an expected target role for such a big striker.

He played as a shadow underneath McInerney when they were partnered, which was somewhat surprising. But he did pretty well, connecting passes particularly to the right side from a withdrawn position.

In the end, both teams' lack of a playmaker is what kept them from controlling the game and taking three points. It's been the reality for both teams in 2013, but Seattle has started to find ways around it with its wide play.

What will be interesting to see is whether that trend continues when Osvaldo Alonso, Shalrie Joseph and Obafemi Martins get an extended run in the starting lineup.