Major League Soccer salary numbers are out again, so it’s time to take a detailed look at them.

The Major League Soccer Players Union released updated salary information up to May 1 today. Among the raw data in that list lies a treasure trove of conclusions that can be drawn.

Also, a note on Designated Players: Some of the guys in the document make over $350,000 but are not Designated Players — and vice versa. MLS roster rules are complicated to say the least, but in most cases, allocation money can be used to buy down how much the player counts against the salary cap, but transfer fees and other miscellaneous tidbits can count in the calculation. 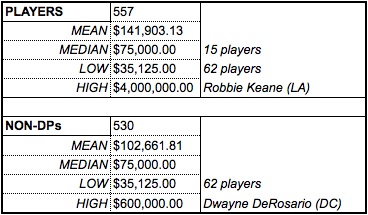 The MLSPU document included 557 players' salary information. Most of them are under contract with specific clubs, but two MLS pool goalkeepers and five released players were also included.

That minimum number is up from $33,750 last year, signifying a 4 percent increase.

Taking Designated Players out of the equation, the average player will make $102,661.81 in 2012. Making the federal minimum wage, working 40 hours per week, it would take over 88 months (over seven years) to make that.

We can also look at the average salary over the years, which is currently trending downward. However, midseason Designated Player signings should boost the number higher. Keep in mind, though, that David Beckham and Rafael Marquez were two of the highest-paid players in the league last year, and they are no longer in MLS. 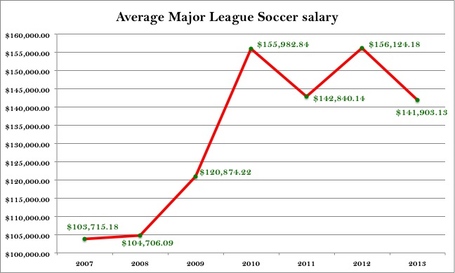 Forwards are still the highest-paid players, and goalkeepers are still the lowest paid — both by quite a margin. The same trends would likely hold true no matter which league in the world is sampled.

One of the more interesting tables we can make is a points-versus-salary breakdown. 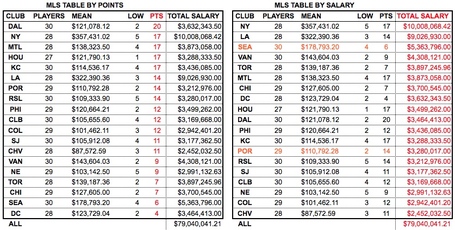 Notably, Seattle has the third-highest salary in the league, but it is in next-to-last place in the Supporters' Shield race. The Portland Timbers are nearer the opposite end of that spectrum: tied for sixth in the league, but down at 13th in the salary standings.

Looking at the total salary numbers, the New York Red Bulls and Los Angeles Galaxy continue to run away with the lead. That's also no surprise, as they are in the two largest markets in the country.

However, Seattle fans can take some solace in the fact that their ownership group is trying to keep pace — while still being realistic. For comparison, Chivas USA's average salary is almost $15,000 lower than the second-lowest Colorado Rapids despite also being in the rich Los Angeles marketplace.

Your turn. Fill in the blank here. What does this all mean? Anything? Everything? Nothing?