Seattle's daunting May continues with a midweek trip to Kansas City, the site of their Open Cup failure.

Share All sharing options for: Scouting Report - Keeping Afloat in the Cauldron

I was really hoping for three points last weekend in Philadelphia — more than for a typical road game. By the end, a point seemed like a fine result after going down a goal and down a man, and given the patchwork midfield we were playing thanks to injury and and the arrival of a tiny new Honey Badger. But all that aside, I think that may have been our best chance for a league win in the entire month of May.

Now we move on to what is on paper our worst chance for a win. Sporting KC is a very talented, very stable team. They've consistently been at the top of the Crunchy Power Rankings all season (and were at the top of them for most of last season as well). They have one of the best home field advantages in the league. The return of Kei Kamara, who's been busy looking in place in the EPL, makes them even more formidable. And Seattle's first appearance on that field since the galling US Open Cup loss in penalties last season is as likely to intimidate as it is to motivate.

That all adds up to it being a difficult game even if the Sounders were playing their first eleven. But of course they won't be. Obafemi Martins is almost certainly still out. Shalrie Joseph is out. Both DeAndre Yedlin and Lamar Neagle will be suspended for at least this match after picking up red cards against the Union. That makes the second forward spot alongside Eddie Johnson a question mark once again. And if Evans moves back to right back to cover for Yedlin, the midfield is still in flux even with the return of Osvaldo Alonso.

But for all the reasons I can argue that it's not likely for Seattle to get a result this week, it doesn't change the fact that they need one. Next up Seattle has home matches against FC Dallas and San Jose. Dallas is in torrid form with 6 wins in 8 matches, and while San Jose has started slow themselves, they still just won the Supporters Shield and will be getting Steven Lenhart and Alan Gordon back for the Seattle match. Oh, and they're currently second in the CPR. Then it's a trip to face the defending champions in Carson to close out the month. By the numbers, two or three points all month wouldn't be a surprising haul. And that would put Seattle at around 9 points through the first third of the season, on pace for 27 points and a complete disaster of a campaign.

Here's the average position map for Kansas City's match on Sunday against Chivas: 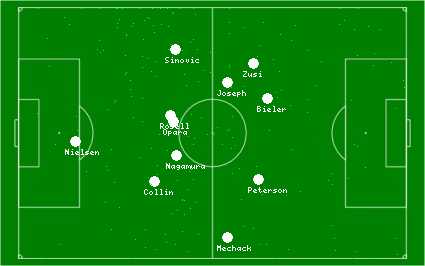 But I'm not sure how much can be gleaned from it. We've already noted it doesn't include Kamara. Also, Nagamura is suspended for the match after stamping on an opponent's hand in the Chivas match. And we'd expect Benny Feilhaber to be back in the lineup over Peterson Joseph. And possibly CJ Sapong as well.

But in more general terms we can confirm that Sporks are still playing their 4-3-3, with 2 holding midfielders supporting the backline and the third midfielder supporting the attacking band. Graham Zusi is still the primary playmaker on the team, no matter where he plays. With him positioned on the wing, it reinforces their tendency to play through the flanks. Seattle's fullbacks will be tested, and this may turn out to not be the worst game in which Yedlin is missing. Zusi's runs from the left wing will call for a defender who's more willing to stay at home and keep the defense from being overly stretched trying to cover.

If the wing service, primarily from Zusi, can be closed down and the fullbacks can be kept at home with Seattle's own attacking wing threats and good defensive play on the midfield sidelines, that should help narrow KC's attack into the middle, where Alonso can be effective.

At the other end, Seattle will again try to patch together an offense out of Eddie Johnson, a hopefully back-in-form Mauro Rosales, and whatever other forward and midfielders are fit and in-form enough to play.

A reasonable scenario for Seattle points that isn't too outlandish is another set piece goal off of Rosales service and either a very hard fought shutout with some lucky breaks or one goal surrendered for consecutive road points. Seattle is still figuring out how to score without Fredy Montero (and while still waiting for Martins) and putting a couple on KC in their own park in a midweek game with a thin lineup seems like too much to ask.

But then again, games aren't played on paper. And there was a time not too long ago when late winners over Kansas City were the norm.