Don't let the final scoreline deceive you. Seattle got trounced (and embarrassed) in their first trip to Sandy this season. To get a different result this time they'll have to hold the midfield and punish a patchwork defense.

This weekend's match in Sandy represents the second time the Sounders have faced the same opponent twice this season and the second chance to get revenge for an early season loss. The first was against the Earthquakes, who beat the Sounders 1-0 in San Jose in the middle of our brutal start to the season. Seattle made up for that one with a 4-0 pasting at CenturyLink that included Lamar Neagle's breakout brace and Obafemi Martins' first Sounders goal.

The next game after that loss in San Jose was the 2-1 loss in Sandy, which was unquestionably the low point of the season. That close scoreline obscures how abysmally Seattle played in that match, especially in the first half. The team looked listless and uninterested, at one point letting a ball roll slowly through their own box toward the endline without any defender bothering to chase it down. That game had many consequences. There was an hour-long closed door meeting afterwards. There was soul searching. Some players lost their starting jobs. And the team recovered. Despite a very difficult June schedule, the team's only loss afterward was a beatdown in Los Angeles that we're going to file away as an anomaly. So now we are to face Real Salt Lake again, and prove that we're a different team from the one that rolled it into town in March and looked like it thought it could coast its way to victory.

I noted in the previous RSL scouting report that the fates of these teams seem oddly linked. When Seattle excels, RSL excels and when the Sounders (rarely) struggle, RSL seems to also (rarely) struggle. Both teams started off this season poorly after a roster rebuild necessitated by the salary cap. Their win over Seattle was only RSL's second win of their first 7 matches. But just as Seattle has recovered, so has Salt Lake. Both teams have only two losses in their last 10. Now both are back in playoff position (by PPG).

Salt Lake is and has for a long time been a well-run and well-coached franchise. The latest evidence for that is their ability to stay competitive during a rebuild. They lost Jamison Olave, but developed an effective replacements in Kwame Watson-Siriboe and Chris Schuler. They lost Fabian Espindola, but added Robbie Findley, Joao Plata, Olmes Garcia, and Devon Sandoval to fill the offensive gap. They lost Will Johnson, but picked off Khari Stephenson in the Re-Entry Draft to replace him.

The result is a roster that's taken some time to meld together but has become effective quickly — especially in defense, where their rate of averaging only 1 goal allowed per game is tied for best in the Conference.

Here's their average position map from their 3-1 win over the Galaxy two weeks ago: 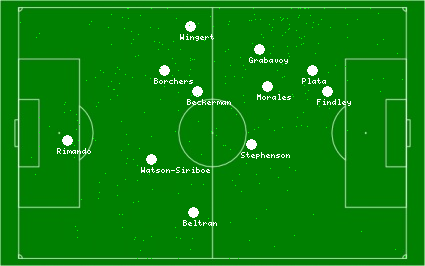 That starting forward pairing of Plata and Findley is as small as you'll see in MLS and it wasn't very effective against the Galaxy backline. RSL's attack didn't become dangerous until Sandoval and Garcia — two six-footers — were subbed in. That did the trick and Garcia scored two goals after the 80th minute to seal the win. In our three questions, Matt from RSL Soapbox predicts the Plata/Findley pairing to start again, but that would surprise me given how much more effective the bigs were. I'd expect some kind of big/small pairing. . maybe Garcia and Plata. And of course Alvaro Sabario is available after returning from national team duty, but likely only as a substitute.

The central defense has been impacted by long term injuries to both Schuler and Watson-Siriboe, and possibly an injury to Borchers as well. That leaves Academy product Carlos Salcedo in at least one spot. . and they may have to dig even deeper into the reserves for another replacement. That would be a huge opportunity for Obafemi Martins and Lamar Neagle to do some damage.

In the midfield they'll be without Luis Gil, who's off with the U20 national team. But the diamond of Kyle Beckerman, Javier Morales, Ned Grabavoy, and Stephenson is very talented and cohesive. RSL dominated the midfield in their thrashing of Seattle earlier in the season and the Sounders will have to find a way to find and hold possession in the middle to turn around that result this weekend.

Still, the best route for the Seattle attack may be down the flanks. If Mauro Rosales can hold possession against Grabavoy and fullback Chris Wingert Seattle can find some joy on the right side, but the chances of that are diminished by the fact that the Sounders will be without DeAndre Yedlin at right back, who's also with the youth national team. Rosales has struggled without a dangerous fullback to play off of, and he's more prone to dribble into blind alleys and lose the ball. It may take some runs to the wing by Neagle to create the space he needs.

On the left, we could see returning national teamers Brad Evans or Mario Martinez. Alex Caskey is unlikely to get another run out in this match after consistently struggling to make an impact in his previous starts. Eddie Johnson starting at forward seems unlikely given the number of minutes he's played for the US, but if he does that could move Neagle to left wing. But again, I think Neagle is more likely to create the space for Rosales to be effective than anyone else in the attack.

The midfield pairing responsible for holding the line against RSL's central dominance is also a question. Shalrie Joseph is available and effective in his way, but he needs a partner who can cover ground to be effective in defense. When that partner is Osvaldo Alonso, it works well. But with Alonso almost certainly out for another match, that's not an option. Evans can certainly cover ground if he's fit to play after his own duty with the US. Servando Carrasco has shown himself to also be an effective partner for Alonso but the Carrasco/Joseph pairing has not looked good. Andy Rose is also available, but again. . probably not the best partner for Joseph. Another option is to just punt Joseph's advantages in exchange for not having to deal with his disadvantages and pair up Evans and Carrasco or Carrasco and Rose. It's a bit galling for a Designated Player to be a healthy scratch, but sometimes that's what's best for the team.

Overall, this looks unlikely to be a scoreless draw. Real Salt Lake's defense is a shambles due to injury and Seattle's incredibly talented attacking force will be able to make something happen there. And at the other end, with Salt Lake's midfield dominance and array of attacking threats, I wouldn't bet against them scoring either. I think a 2-2 draw would both be true to form and something Seattle could feel pretty good about getting out of Sandy without its most important player on the field.