Playmaking does not have to happen from the middle, but it does need to happen. One of the issues the Sounders had against Real Salt Lake was not getting Mauro Rosales enough touches.

With this season's difficulties in the attacking third it is sometimes easy to forget that Mauro Rosales has a strong history as a playmaker. He is a #10 that sits mainly out wide. Yes, many of those assists come from crosses, but this does not reduce their value. In fact over his time in the league he is tied with Brad Davis for the most primary assists (sort by first assists and subtract players' 2010 values). Both are wide men that sit ahead of classic CAM types like Ferreira and Morales. They are ahead of the withdrawn forward types of DeRo, Montero, Henry and those harder to classify due to their role varying match-to-match such as Donovan and Le Toux.

Playmaking is not confined to a space on the field. But it does need to happen and the best passers on the team need to be in places where it can succeed. Finding ways to get these men the ball can be tricky. But sometimes even when it is obvious that a man is the focus on the offense teams still succeed in getting them the ball. 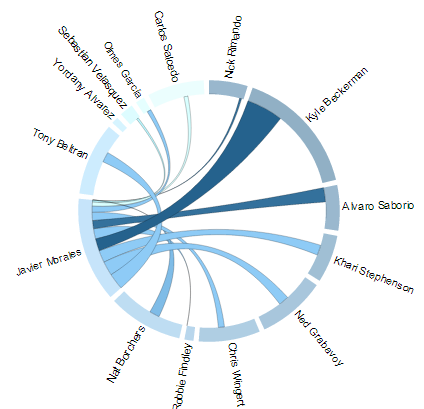 From the beta of the new statistics and match day presentation system by MLSSoccer.com this chart cleaning displays the amount of passing that Javier did compared to his teammates. He sent 14.2% of all RSL passes down the pitch and the variety of targets was wide. 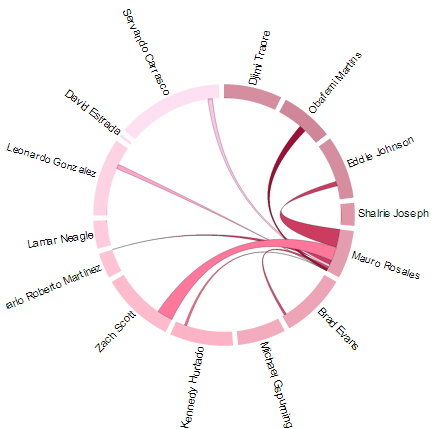 Mauro was not the focus for the Sounders. Only Neagle and Gspurning passed the ball less, again as a ratio of individual passes to total team passes. One of the most successful providers over the last two plus seasons was shut down.

"Rosales needs to get more touches than he got in the 70 minutes he played," Coach Sigi Schmid told the media yesterday after practice, "and we need to do a better job of sustaining pressure on the attacking end of the field."

There are ways to do that, but Sigi is not going to give direct answers as to how.

"The team needs to find him and he needs to find the ball. It's a combination of both things," Schmid expanded,"so we need to do a better job of finding him and we have to make sure he gets into positions where we can find him. Part of it is our ability to, again, maintain possession in the final third of the field."

A large part of that has to do with the right back. Last year it became clear that without an attacking fullback Rosales gets shut down through simple double teams from the opposition's left back and left mid. To get out of those situations Rosales needs quick, simple outlets to a forward on the right side or a central midfielder. Against Salt Lake the midfield was not forward enough to help. Most of Mauro's passes to forwards were to Johnson, who was usually on the left side.

The simple solution is to get Yedlin back, but the team needs to find new ways to release Rosales. That may mean him flashing inside a bit more often, maybe early on the pitch in the central third. This would reduce his crossing attempt rate. While he is a strong crosser a 30% success rate (click passing, click crosses) for under two successful crosses may not be something to maintain. He has more crosses attempted than the next three players combined (none of those are regular starters).

But Mauro is also the Sounders best player at throughballs. Considering the speed on the pitch the ability to spring the forwards is vital to Seattle's success. It does not matter if one does that by land or air. He still has that vision. Getting those touches are important.

Just as the CAMs in the league drift wide to find the ball in new spaces Rosales needs to slip inside more often so that the players passing to him are more varied. This would also give him more chances to find open men and for Seattle to maintain possession in attacking spaces.

Rosales has good games this year, as well as some bad ones. That suggests a slight aging curve, not the end of times. It also means that the club needs to find ways to put him in situations where he can succeed.