The US Open Cup is gone, but there's still a Cup to win. And we'll need a young midfield to step up to help win this one.

Usually a home Cascadia match will have enough gravity to start pulling in attention weeks ahead of time. But this weekend's matchup with Vancouver has had to compete for that attention. Sounders fans have had plenty of other news and developments to focus on, including a whiplash start to the season that saw one of their worst runs ever followed immediately by one of their best. Then there's the presence of two Sounders on the US National team — a national team that will be playing its first major match in Seattle in decades next week. And there's a raft of injuries to sort through that require some serious roster calculus to figure out. And Obafemi Martins shockingly (but not undeservedly) rescinded red-card after our latest Salazaring. And of course the wound from losing in our first US Open Cup match this season is still raw.

But emerging though all of that noise and distraction, Cascadia match three has arrived on our doorstep. And it's a big one. More than 50,000 fans will be in the building to watch what healthy Sounders remain try to win a Cup match before a long two week break to think about the result. We're quickly running out of honors we can still earn this season. The Open Cup is cruelly out of reach. There's no CCL group to win this season. A Supporters Shield win is technically possible, but — after our winless start — very unlikely. Now the focus is on MLS Cup and the Cascadia Cup.

With four home matches this season and still one of the strongest rosters in the league when healthy, we should still be strongly favored for the Cup. But we faltered in game one against Portland when Rodney Wallace scored a game-tying goal in injury time. Portland's own draw in Vancouver in game two kept the Timbers from jumping out too far ahead in the standings, but earning only a point in our first two Cascadia matches would effectively annul our scheduling advantage this season, and two points would barely be better. A win is needed this weekend to stay in the driver's seat.

It helps that Vancouver is dealing with some roster instability of its own. The team inexplicably sent stalwart Alain Rochat to DC United this week in exchange for draft picks. Jay Demerit is likely out for the season after tearing his Achilles in week one. Daigo Kobayashi is questionable. And athletic forward Darren Mattocks is away on international duty playing against the US for Jamaica. 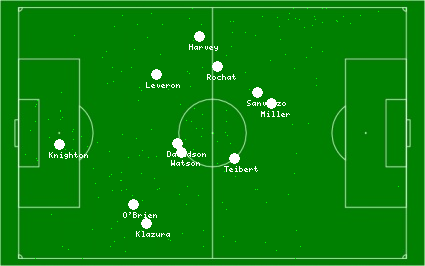 That's a pretty left-leaning 4-3-3. Rochat is gone, but Nigel Reo-Coker is returning from suspension and should be expected to line up in that central three as the playmaker in front of holding midfielders Jun Marques Davidson and Matt Watson. The three attacking players are likely unchanged. Kenny Miller scored the winner over New York after a pretty lackluster season thus far. He's joined by the always dangerous Camilo — who's got Montero-like ability on free kicks — and Canadian wunderkind Russell Teibert.

With Lee Young-Pyo likely returning to his right back spot and Jordan Harvey installed as the left back now that Rochat's gone, the fullbacks will provide a lot of the width on offense. Harvey likes to bomb forward for overlaps and Young-Pyo is a canny distributor.

Seattle's roster instability has mostly left the defense untouched and despite Eddie Johnson being away, the forwards shouldn't be a weakness either given a likely pairing of Obafemi Martins and Lamar Neagle. It's in midfield where we'll feel the pain. Mario Martinez, Steve Zakuani, Osvaldo Alonso, and Shalrie Joseph are all out. It's the latter two who'll be most missed. Our offense is likely to be in pretty good shape with the two forwards and Mauro Rosales back providing service from the right. But with Vancouver's dangerous attacking trio, plus the late runs of Reo-Coker and the attacking width the fullbacks provide, the defense will need a lot of help from the midfield. We'll be relying on relatively inexperienced players like Alex Caskey, Servando Carrasco, and Andy Rose to control that midfield. It will be a stern test and an opportunity for those players to show that they have a long term role to play at the club. Carrasco has had a good season thus far, but mostly alongside the indomitable Alonso. Rose had some shaky performances, including in Seattle's abject performance at Real Salt Lake. Caskey hasn't looked as strong a presence at left wing as he did in spot appearances last season.

The hope is that the significant home field advantage of 50,000 deafening supporters motivates and stiffens that midfield. Despite the crap start to the season and inconsistent roster, Seattle's only lost once at home. Their two really infamous performances came on the road in Utah and Los Angeles. Clearly playing at home makes a difference, and with 20,000 extra voices (even if a few of them have Canadian accents) and a rivalry cup on the line, motivation shouldn't be an issue.