Seattle got off to a quick start against the Vancouver Whitecaps on Saturday with Andy Rose's goal in the ninth minute. It was less of a well-worked goal and more of a defensive breakdown. SaH tactician Liviu Bird breaks down the breakdown.

SEATTLE — By all accounts, it hasn't been the easiest season for Andy Rose. However, his early goal in Sounders FC's 3-2 victory over the Vancouver Whitecaps likely lifted some weight off his shoulders.

If that looked easy, it was only because the Whitecaps defense made it appear that way. Their poor shape led directly to the goal, as it opened up a giant gap in the back line. 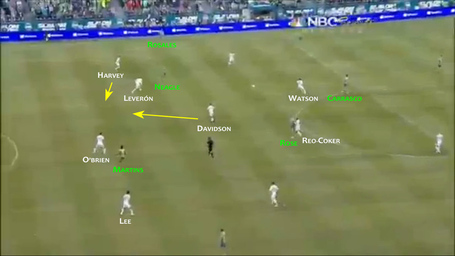 When Servando Carrasco plays the initial ball into Lamar Neagle, who is checking off the Seattle front line, center back Johnny Leverón follows him. Center backs are often drawn into the tough decision of whether to follow a checking runner or leave him to the holding midfielder.

In this case, it is the correct decision because Jun Marques Davidson is too far away to mark Neagle effectively. However, Davidson should be running back to cover Leverón, and left back Jordan Harvey should tuck in.

It seems as though Harvey has his eye on Mauro Rosales, but the dangerous space is in the middle. Rosales is not in a position to do too much damage if he gets the ball on the touchline here. 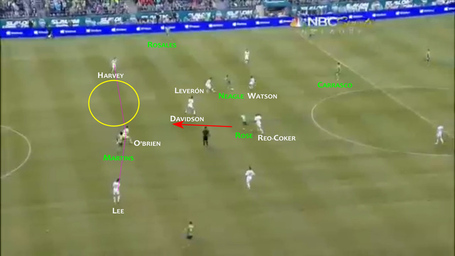 Because Davidson stands his ground, and Harvey does not tuck in, the gap in Vancouver's back line emerges. Rose does well to recognize it early, and he starts his run as Neagle receives with his back to goal. Nigel Reo-Coker lets him go, and Andy O'Brien cannot slide over because he is preoccupied with Obafemi Martins.

Still, as long as Neagle doesn't have space to turn, it should turn out fine for the Whitecaps. 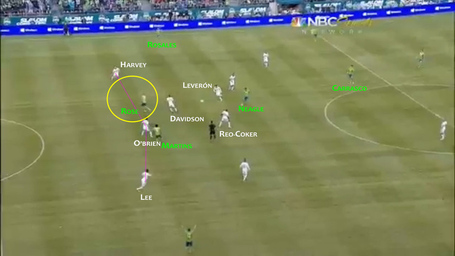 But Neagle finds the space to turn, and suddenly, Rose has a comfortable radius in which he sees no defenders. The rest is simple: let the ball run through and slot it home. The Vancouver back four is caught flat, which almost always means there is a gap somewhere.

Rose finds it, and he puts his team up early.