San Jose Scouting Report: While They're Down

Seattle faces a struggling San Jose squad dealing with major international absences. Still, don't sleep on this team. It's still the Earthquakes of 2012, just with a little less good luck.

Share All sharing options for: San Jose Scouting Report: While They're Down

The fall for the San Jose Earthquakes has been precipitous — as hard a fall as the league has seen in a long time. Last season they won the Supporters Shield and now they sit second from the bottom in the West — ahead of only the sideshow that is Chivas USA and with only a glimmer of hope of even making the playoffs. And they parted with the coach that managed the team for over 4 years and guided them to that Shield.

You'd expect that for a team to fall so far they'd have to have lost a critical player to injury or transfers — maybe multiple critical players. But the only significant loss for San Jose was Simon Dawkins. The Tottenham loanee was an important offensive player for the team, no question. His pace and passing touch in the attacking midfield opened up the attack. But with 6 goals and 2 assists last season he wasn't the driving force for the offense. He wasn't Thierry Henry or Robbie Keane. And his loss can't entirely account for the condition of the Quakes. The other stars of their 2012 run are all still there.

The difference really is mostly in the offense. Last year the Quakes gave up 43 goals — not an impressive total and one of the worst of the playoff teams. This season they're on pace to give up 54. Worse, but not dramatically so. But they won the Shield on their absurd goal-scoring totals. Their total of 72 last season blew away the rest of the league. No one else even had 60. Now they're on pace for 34.

So what can the cause be? A natural regression has to be a big part of it. San Jose built a daunting reputation last season as a team that would always come through in injury time with a late goal to draw or win a game. Steven Lenhart's and Alan Gordon's exploits late in matches were unstoppable and regular as clockwork. But that's not sustainable. No team can simply score goals at will, and a big part of San Jose's run last season was some blend of luck and intimidation that made those late game heroics seem inevitable. When the luck went the intimidation quickly followed.

And Lenhart and Gordon (and now Jahn) seem to have diminished in their ability to draw attention away from Chris Wondolowski. Without the open spaces they create he's regressed to just an average MLS forward. He's gone from tying Roy Lassiter's record of 27 goals to being on pace for 10. Part of that is probably the referees keeping a closer eye on Lenhart's antics, which accounted for a lot of that attention-drawing.

Goal-scoring usually comes as a progression of events. . from passing the final third, to a shot, to a shot that's on frame, to a goal. So let's look at San Jose's team stats and see where the pipeline is breaking down:

You can see clearly that the issue isn't so much getting shots off. Their shots per game are barely down at all. . about 8%. But their strike rate — the rate that shots are turning into goals — varies wildly. I've written over the years that there's a lot of evidence that most variation in strike rate is random and that teams will tend to regress to a mean. And that that variance in strike rate (and strike rate allowed) is by far the biggest element of luck in a team's season results (understandably, since goals are so important in determining results). San Jose's results are both evidence of this and make them a dramatic victim of the effects.

A strike rate of a little under 10% is typical and teams will tend to drift to it over time. So a strike rate of near 14% is very good. Last season I wrote an article highlighting New York's absurd 18% strike rate through May. San Jose's was 12%. New York came back down to earth by the end of the season. San Jose's went higher. And their current 7.8% is terrible. It's second worst in the league ahead of only DC United (who have a strike rate so low I don't even dare print it lest it melt down the webserver). When your strike rate nearly halves, your number of goals halves even if you're keeping up the same number of shots. And when your number of goals halves, you go from winning the Supporters Shield to not making the playoffs.

The flipside of that is that you can't take the team lightly. You can't count on that low strike rate lasting and stealing away all of their goals forever. The Crunchy Power Rankings, which are designed to eliminate that luck element, have San Jose as the 3rd best team in the league. Last season the last CPR I ran had them. . 4th. No significant change in their roster. . no significant change in their play. Their goals will start coming, and woe betide the team that plays as if this is some lightweight team they can roll over (like, say, Chivas. . who really are that bad).

Here's their APM from their last match — a 2-0 away loss to the Revolution: 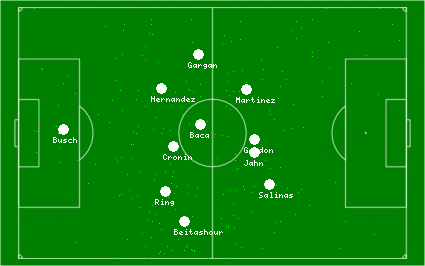 One major factor that Seattle will have going for them that isn't just luck is that Wondolowski is out playing for the US at the Gold Cup (as Belize knows very well). Without him against New England it was Gordon and Jahn up front playing as two bigs. Neither has anything close to the elusiveness of Wondo-the-ghost and neither is particularly fast. The key to shutting them down is just winning the headers. This would be a good game for a center back like Omar Gonzalez or the Quakes' own Victor Bernardez, who can dominate the aerial game. Sounders center backs tend to be more about positioning and it'll be a tough ask to hold airspace superiority all match against some combination of Lenhart, Jahn, and Gordon. Might this be a match for Zach Scott in the central defense? I'd do it, but I'm just a little bit crazy.

They are also without Marvin Chavez, who's with Honduras. He's become the team's creator and playmaker on the wing. And the last time they faced the Sounders without Chavez it was a 4-0 pasting that kicked off their current terrible run of form. Instead it'll be Shea Salinas on the wing trying to create chances. Both Rafael Baca and Sam Cronin are more defensive in the middle (though Baca has the pace to get forward if he wants). If Seattle can shut down the wings with DeAndre Yedlin and Leo Gonzalez, San Jose will be stuck trying to loft early crosses to their forwards heads and relying on set pieces to get the ball in the box.

On the other side, the big news is the expected return of Osvaldo Alonso. I won't belabor the point for Sounders fans, but the team is tremendously better with the Honey Badger bossing the midfield. Yedlin's expected return also adds a little more offensive dynamism to the right side and hopefully gives Mauro Rosales the space to get to his usual high level of playmaking. On the other hand, Obafemi Martins is out. Which would seem like a terrible development, except that the team has consistently played better when the forward pairing was Lamar Neagle + one of our two big-money strikers. So despite our love for Oba, it's hard to feel too down about seeing Neagle lining up at forward again.

And Shalrie Joseph is out after looking good in the central midfield against Vancouver. But Alonso paired with Servando Carrasco has been a good look this year. With Yedlin bombing up the sideline and Rosales with space, two defensive central midfielders is a fine look, especially on the road. That leaves left wing to, say, Brad Evans. He isn't a natural left winger, but he's our best player at playing a position he doesn't naturally play, so that's a fine fit as well.

Overall, despite the injuries Seattle is in much better roster shape than San Jose. So even if they kiss enough four leaf clovers to get their luck back, this is a match Seattle should be able to get a result in.

But the most important factor. . the one that makes all this analysis moot, is that there's a cup on the line. The Heritage Cup, which was fought for by our forefathers, and their foref. . .okay, okay. I shouldn't make fun of a fan-created cup. It's still better than the Tostitos Trillium Cup or whatever. But with only two teams contesting it, it's built on the phantom Sounders/Earthquakes rivalry. Hopefully other teams with NASL heritage will join the picture (the Cosmos or Rowdies in particular would give it some gravitas) but right now it's crowded out by the Cascadia Cup, which claims the loyalty of three potential Heritage Cup contestants. Still, hardware is hardware. And according to the current rules of the Cup, only the last two matches between the teams count, which would be this one at the Sounders 4-0 win in May. So anything better than a 4 goal loss to the Quakes (knock on wood) and we get our first (but hopefully not last) trophy of 2013.