There are a lot of theories as to why the Sounders are in middle of their two match losing streak. Some of these may be valid. Others may not. Let's find out by looking at some chalkboards, statistics and chatting about what is and isn't working with certain elements of the team.

Share All sharing options for: Assessing blame: Part One - Lacking a CAM

Let's start with the Central Attacking Midfielder, the #10, the point of the diamond. It gets a lot of debate around these parts. This beast is seen as necessary particularly in 4-4-2 (Diamond), 4-2-3-1 and 4-2-1-3 shapes. While none of these are what Seattle Sounders FC is doing right now that space needs to be used in some fashion during matches even if it is just to switch the ball from side to side rather than thread a pass into the area. 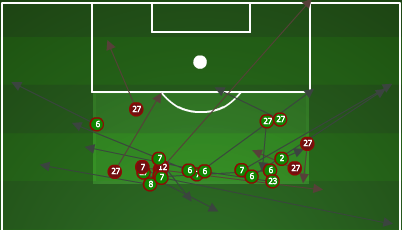 Now, most of those passes were switches. Alonso for example was 6 for 6 in that area, but all were square balls. Forward Lamar Neagle had the only completed pass into the area. Several #7s show up because Eddie Johnson was in that space usually during hold up play getting the midfield to run on to his ball.

San Jose was much less active there. 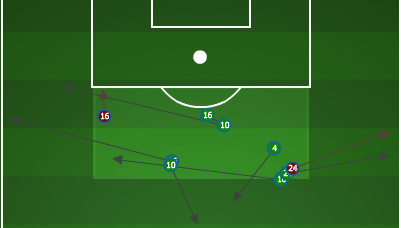 Neither team uses a traditional CAM, but San Jose doesn't even use that space. They get the ball into the area using balls over the top or crosses. That's their style.

Seattle's is really and truly, when compared to MLS teams, a team that plays through the middle. They are in the squad that uses the middle third of the pitch from left to middle to right more than any other. They are also a team that is in the lower third in crosses and long balls.

The way they use the CAM space as a switchboard to generate short pass attacks from the flanks is part of their style, and one that feels consistent over the years when removing a certain trequartista from the conversation. For example against Vancouver Whitecaps FC they also dominated the use of CAM space (compare SSFC to VWFC).

Using that area more did not result in wins. Could it be used differently by a more creative player? Probably, but Alonso is a fairly decent creator over the years. He was probably the second most proficient Sounder with the ball entering the match (Yedlin being the other in the Starting XI). Against the Whitecaps it was Shalrie Joseph in that area. He merely had two Key Passes, two Throughballs and zero Possessions Lost due to Tackle.

Oddly, the last match Seattle won was a match where they weren't as good in that space as the opponent. That's kind of soccer. How to use space is about style, not about winning (unless we're specifically talking Shots On Goal Inside The Area, that's a pretty great number).

Is the CAM space to blame for the losses? Probably not. Seattle dominated and edged their opponents' use of that area. The three headed monster at healthy central midfield of Carrasco, Alonso and Joseph means that someone will be able to use that space as is their habit. Forwards drop into it to help (this is happening, but less effectively than that guy headed to Portugal) and the more box-to-box mid acts as that switchboard changing angles.

There is fault. Seattle was out played in elements of the loss to San Jose, but it is not a CAM or the CAM space that is the difference in these games.