After practice today GM and owner Adrian Hanauer indicated that the team is continuing the wanding, but more man power has been added.

Share All sharing options for: Wanding will continue - A map to help avoid high traffic entries

After a poor launch to the new metal detecting wand policy Seattle Sounders FC and CenturyLink Field staff was able to kind of practice new procedures during the Gold Cup double header. The process will continue for Saturday's 1 PM match against the Colorado Rapids but with more manpower behind the efforts and team ambassadors at the main points of entry.

"We have a plan in place. It includes considerably more manpower thrown at the issue. We believe a better process, a test at the Gold Cup game, and we're confident it will go smoother this time," Hanauer told the media today. "It's not going to be perfect. It's an added step in the process of getting in the building, and there's just no way to make that go exactly like it did before, but if we can keep the delays to an absolute minimum, then we feel like we've solved the issue."

Team officials have insisted both to the Alliance Council and to reporters that this measure is a proactive activity that applies to all stadium events for the foreseeable future.

Just got out of @AllianceCouncil meeting where @TaylorGraham26 filled us in on plans to improve security/wanding issues.

Main points: 1) More gates. South Gate, far S end of stadium, will be opened. The stairs to this gate extend to Occidental.

3) More outreach and education. Trying to continue to spread the word, folks should think about getting to stadium a bit earlier than past.

The decision is driven by security. The venue is increasing their security for all events, from Kenny Chesney, Supercross, NFL, to Sounders.

Cox is the President of the Alliance Council.

That new South Gate opening up at the top of the stairs should help, but crowd management between it and the South West Gate will be important. Clearly the SW and North West Gates had the largest issues. 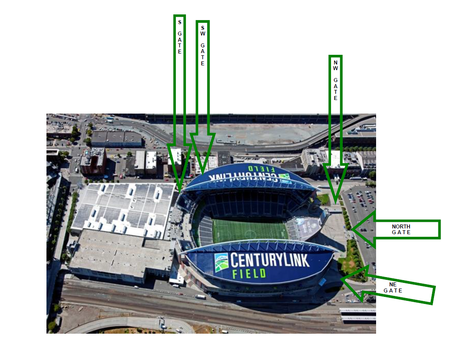 The North and North East Gates see much less traffic. If you are coming from the train station or International District you may want to skip the food trucks and just get into the stadium early. There are a few more options than people typically think about when coming to the stadium.

The team is honoring Sounders FC fan Jacques Gordon. Jacques passed away last week. That will be at 12:52 and is more reason to get there early.