Scouting Report: Only Room For One

I'm predicting the last playoff spot will come down to Seattle, Colorado, or Dallas. Winning this one goes a long way toward earning that spot. Losing it is really bad.

Share All sharing options for: Scouting Report: Only Room For One

Let's have some real talk about the playoffs. The very Colorado team that we're playing this weekend demonstrated that in MLS all you have to do is make the playoffs and then go on a good run. They were one of the least impressive playoff teams in the 2010 season, but they were a playoff team. And they went on a good run. And now they have a star above their crest.

So getting there is the goal. And what will it take to get there? This is a tough Western Conference and it looks like it might take 50 points to get a playoff berth, and maybe even higher. That's a switch from last season when the Columbus Crew in the East were left out with 52 points but 40 would have got you in in the West. For now, let's target 50.

Here's the points per game necessary over the rest of the season to get to 50 points:

Real Salt Lake will waltz into the playoffs. 0.93 PPG is Chivas-level performance and nobody sane expects that out of Kreis' outfit. Similarly, it'd be hard to expect Portland to falter that far. And after going undefeated in their last 6, Vancouver looks legit and a 1.2 PPG seems very likely. So that's three teams that I think would be very unlikely to finish below 50 points.

From the other direction, Chivas is out. Not mathematically, but 2.36 PPG is a ridiculous rate even for a very good team and they aren't that. San Jose is barely holding on, thanks to their win over Seattle. 2 PPG for the rest of the season would be more than the points rate that won them the Supporters Shield last season and even that took a lot of luck. I'm going to cross them out for now.

So that's four teams vying for two playoff spots. And for now I'm just going to pencil the Galaxy in for one. They won the last two championships after lousy starts and I'm not going to predict they implode until I actually see it happen. So in that scenario, Seattle, Dallas, and Colorado are fighting for one playoff spot. That makes this weekend's match a virtual 6 pointer (and it also means 4 of the Sounders last 5 matches should have major playoff implications, so get ready for that).

Much is being made of the fact that Seattle basically owns the Rapids, especially in Seattle. Colorado has never even picked up a point at CenturyLink (or Qwest) and overall the Sounders are 8-1-1 in the series. And it was a win over the Rapids that finally ended Seattle's winless start to the season. But matchup trivia is just that — trivia. Jerseys don't play each other nor do ghosts of past players. There will come a day that the Rapids are better or luckier or both, and there's a real chance it's today. This is a good Rapids team. And they're young enough that they might be good for a long time. Dillon Powers and Deshorn Brown are both compelling candidates for rookie of the year. You rarely see two nominees on the same team and you can make a decent argument that a third — home grown center back Shane O'Neill — would be in the conversation if he hadn't played 4 minutes last season.

Here's the average position map from their 2-1 midweek home win over the Revolution: 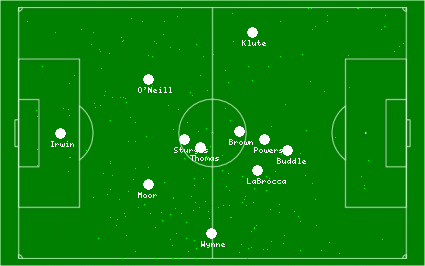 A lot of wing switching centers the players in a cluster in the middle. Clearly the players have the freedom to move laterally. The defensive center is held down by Shavar Thomas and Nathan Sturgis. Sounders fans always knew the Sturge would blossom once he figured out how to pass to his left, and it seems those days have arrived. Nick LaBrocca is also a decent playmaker and with Powers in the midfield as well there's a ton of good passing talent through the spine. Which will be used to spray the ball to attacks from the wings, primarily from Brown or Edson Buddle. I expect them to put a lot of pressure on the Seattle fullbacks, which can create chances particularly on DeAndre Yedlin's right side if he's pushed up to help the attack.

Seattle's injury list is dauntingly long (10 players), but it's not as bad as it may seem at first look. Most of the missing players are reserves. Thanks to Osvaldo Alonso's red card being rescinded, the starting lineup will be mostly intact. Eddie Johnson being out for national team duty creates an opportunity to try to Lamar Neagle/Obafemi Martins pairing which has looked plenty dangerous this season. The other gaps are at keeper, left wing, and center back. With the top three keepers all out injured we'll see Andrew Weber suited up in net. Marc Burch had a mixed game at left wing in the last match, but he had moments and the team is starved for good service, which he can provide if he gets breathing space on the ball. And at center back Zach Scott is a very capable backup to Djimi Traore, especially at shutting down attacks in the air, which the Rapids have been particularly good at this season.

The problems will come when Seattle needs a sub. David Estrada and Sammy Ochoa have barely seen the field this season and it's unlikely the team will need two forward subs. They're starving for midfielders, especially if Brad Evans can't go with his (no doubt excruciating) rib injury. If anyone gets hurt in this match, we're screwed. Fortunately, nobody ever gets hurt against Colo. . oh.