But it's still a bit unfair to say he's only playing well for the Red, White and Blue.

You may have noticed that Eddie Johnson is having a pretty good run with the United States national team. The forward scored again on Wednesday, giving him goals in two straight games. That's three goals and an assist for the Yanks in 2013 and, stretching back to last season, he now has five goals and two assists in his past 770 minutes with the national team.

These are good numbers, to be sure. He's basically scoring .58 goals per 90 minutes since getting into the good graces of Jurgen Klinsmann. The only U.S. players with more international goals and assists in that time are Landon Donovan and Clint Dempsey. Heady to company to be sure.

Understandably, Seattle Sounders fans are mostly interested in this only as it relates to their team, and there's a growing sense that Johnson is playing better in the Red, White and Blue than he is in the Rave Green.

The numbers aren't so clear.

Dating back to the start of the 2012 MLS season, Johnson has scored 18 MLS goals with four assists in 3,153 minutes. That calculates out to about .51 goals per 90. No, it's not quite as good as his figure with the national team, but three more goals in the same amount of minutes would have put him over. He obviously didn't score those goals, but my point is that the numbers aren't as different as perception suggests.

Now, it is true that this year alone the numbers are a bit more stark. But with three goals in just 323 minutes on the national team, we're also talking about a very small sample size.

That said, I thought it would be worthwhile to look at Johnson's performance against Honduras and compare it to his last couple games with the Sounders.

In case you needed a reminder, here's the buildup to his goal on Wednesday:

It's a pretty impressive display, it should be said. Johnson does a great job of luring his defender out of position and shows a great understanding with Landon Donovan to peel off toward goal. And Donovan does a great of reading Johnson's run.

Johnson also help set up the second goal when he won a header, something he did on several occasions. In short, it was the kind of target-forward performance that helped get Johnson back onto the international stage.

But take a look at these three chalkboards. One is from the Honduras game and the others are from Johnson's last two Sounders games. 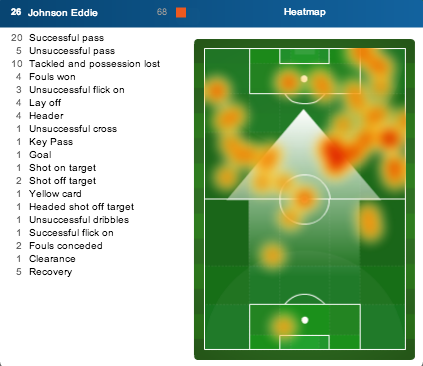 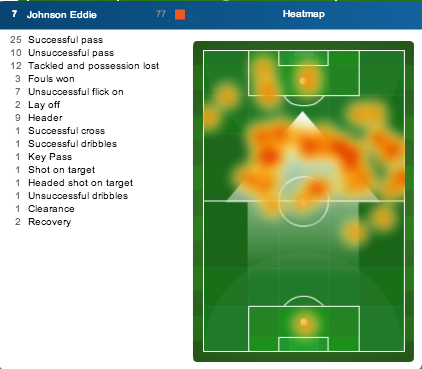 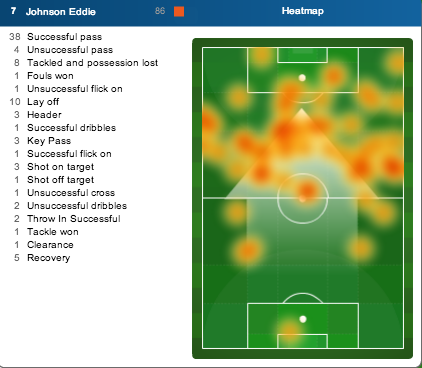 Those aren't carbon copies, by any stretch, but they do show a player who is equally active and involved, something that Johnson has been criticized for not doing recently. The big difference, best I can tell, is service. With the national team, he's getting it. With the Sounders, not so much.

That probably is to be expected, to a degree, but Johnson is still doing a lot right. I understand that Obafemi Martins and Lamar Neagle might seem to be a more effective partnership, but it still seems clear to me that the Sounders' best chance at being a MLS Cup contender involves Johnson being on the field.