Chivas Scouting Report: Run It Up

This should be the easiest match on the Sounders schedule and even without a 100% fit squad, there's no excuse not to win comfortably.

Share All sharing options for: Chivas Scouting Report: Run It Up

Oh, you think your team has problems? The service to your two world class strikers isn't as good as you'd like it to be? The defense that's allowed the second fewest goals in the conference has been a little porous for your tastes? Concerned that your current pace only makes for a borderline playoff team? You don't have problems. Chivas USA has problems.

The terribleness of their record is somewhat obscured by an implausible early season run when they won 3 of 4 games, scored 9 goals in those games, and had some commentators unfamiliar with sample size calling for Chelis as a coach of the year candidate. Seven matches later, he was fired. If you kick that impressive March out, they are by far the worst team in the league. Their only win since then was last week's 1-0 home win over the nearly as bad Toronto FC on a deflected goal and a ridiculous non-penalty call. Since the beginning of April they've scored 8 goals in 15 games (I'm not counting the own-goals they've scored). By comparison, Seattle scored 8 goals in two games in the middle of May.

Chivas USA isn't making the playoffs this year. We already know that, and we've known it for a long time. The question is what they're going to do with the rest of the season. And other than deflect accusations of racism and related lawsuits, the answer seems to be to try out a lot of players. Their 29 unique starters this season is the highest in the league. They're in the top 3 teams this season in our roster churn metric and unlike the teams near them in the standings, it's not because of injury or international absences.

One of those players added is onetime Captain America Carlos Bocanegra, who's come back from Europe after not getting enough playing time with Scottish third division side (now second) Rangers. And the three-defender experiment under Chelis seems to be over, which is a bad sign for teams eager to score 3 or 4 goals against them. Now 2 or 3 seems to be a more reasonable target, but that should still be enough given that they haven't scored 2 goals in a match since April (not counting own-goals).

Here's the APM from that win over Toronto: 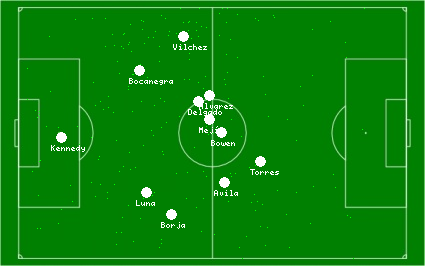 Besides Bocanegra, their biggest recent addition is striker Cubo Torres, on loan from parent Chivas de Guadalajara. With Eric Avila suspended after picking up a red card, he and Tristan Bowen will be the focus of the attack, mostly down their right hand side. Which means it'll be a good match for Leo Gonzalez to stay at home and demonstrate once again that he's quietly become one of the best defensive left backs in the league. And if Chivas continues to focus their attack to the right, it would free up DeAndre Yedlin to overload the Sounders right wing and become another playmaker.

And a playmaker is what they need. Seattle will still be without Eddie Johnson, but the forward pairing of Obafemi Martins and Lamar Neagle is more than good enough to beat very good teams in this league, much less Chivas USA. The problem is getting them the ball in dangerous places. Shalrie Joseph has proven to be the only central player able to do that reliably, and he's rarely been fit enough to get on the field. So the playmaking has had to come from the wings, where Mauro Rosales has looked like a shadow of his former self. I know there's a lot of conversation about him needing help to find open spaces, but the reality is his service hasn't been particularly good even when he's had open space. He has wide open crosses every match that are completely wayward. If he can't find his form again, the Sounders have no wingers who can provide consistent service. Which is why we've seen Marc Burch starting at left mid, where his crossing ability can help get the ball into the box. So far we've seen one match where that didn't work and one match where it worked pretty well, so I wouldn't be surprised to see Sigi try it again, especially without a lot of other fit options at left wing.

The other question for Seattle is who pairs with Osvaldo Alonso in the midfield. Assuming Joseph can't go the choices are Servando Carrasco and Brad Evans. The Alonso/Carrasco pairing has been pretty solid this season, particularly during that May run of dominance against very good teams. But Evans is a hard guy to leave on the bench, so that will be an interesting decision.

Otherwise the roster is pretty much set. We know Andrew Weber will be once again starting in goal. There's word that Michael Gspurning may be fit enough to make the bench, but that's mostly just symbolic. The backup goalkeeper almost never sees the field (though with Seattle's luck with goalkeeper injuries, maybe I shouldn't be so confident). Djimi Traore and Zach Scott look to be the preferred center back combo and it sounds like both are available.

This isn't quite the best Sounders team we can put on the field, but it's not very far off. And it's more than talented enough to roll over this Chivas USA side on a cool, clear evening at home. After last week's disappointing draw to Colorado, the number of teams making solid claims on playoff positions is only increasing and failing to get three points at home against Chivas is exactly the sort of result we'd look back on as the cause of our first season in MLS out of the playoffs.