This is the most lopsided matchup of Seattle's season, but it could turn into a trap if the Sounders can't find someone to get Martins and Johnson the ball.

DC United is, as the immortal Charles Barkley would say, turrible. There's a decent argument to be had that Chivas USA is playing worse, but there's no question that when it comes to actual results, United are in the basement of the cellar. They have won only twice this season — both 1-0 wins at home over west coast opponents. And that's with a kind schedule. Ten of their 17 games have been at home, and they have yet to play a match west of Dallas. Despite that they have the fewest goals scored in the league, the worst goal differential, and have scored only twice in the last six games — both penalty kicks. They haven't scored a non-penalty goal since May 19. Et cetera. Et cetera. Apparently the losses of Andy Najar and Maicon Santos had a bigger impact than we expected (though the Crunchy Power Rankings had DCU as a bottom 5 team last season *cough*bragging*cough*).

On top of that turribleness and this being their first trip out West, they will be without Bill Hamid — who's off on Gold Cup duty — and Dwayne De Rosario and Nick DeLeon — who are out injured. So what happens when you take a turrible team and you remove their starting goalkeeper, their attacking engine, and one of their most important midfielders? Gentle readers, you get a dreaded Trap Game.

On paper, this will be Seattle's easiest game of the season; and I'm including the US Open Cup game against Tampa Bay in the accounting. So how susceptible is Seattle to taking an opponent too lightly and getting burned for it? They do lay an egg a few times a season, but generally it's against better teams. Our bad games this year have been against RSL (twice) and Los Angeles. Last year our major bed-pooping was a 4-1 loss to the Impact, but that was on the road and the Impact were a borderline playoff team. Our worst home loss was 2-0 to the Crew, and they also nearly made the playoffs. Sigi does not traditionally lose games to teams he has no business losing to. And Seattle has no business losing to, or even drawing, United tomorrow.

That's not to say everything's set up perfectly. We'll likely be without Osvaldo Alonso for another game (and honestly, why risk him for this one?). DeAndre Yedlin is still carrying a knock and may not be available for any or all of the match. But with the likes of Obafemi Martins, Eddie Johnson, Brad Evans, and Mauro Rosales, we'll still have plenty of talent on the field. 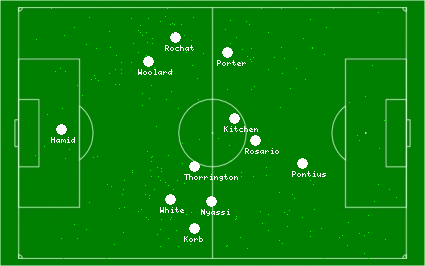 I'll call that a 4-4-2 with De Rosario as a withdrawn forward. Chris Pontius has made the move from bedeviling winger to fulltime forward. After DeRo behind him the entire team is packed into the defensive half. It's easy to see why they don't score many goals when even at home against a middling team they pack it in and hope De Rosario, Pontius, or Nyassi can score on a break.

Why might they play so defensively? Well, their backline is very inexperienced. In the middle Ethan White is still learning to be a pro after being loaned out to the Richmond Kickers last season. Daniel Woolard is a converted fullback. Chris Korb is fine, I guess. They've solidified left back somewhat with a smart trade for Alain Rochat. Previously they'd played right back James Riley there. In this map they're also unusally wide, that's probably mostly due to Vancouver's style of attack in that game, where they sent so many balls to the corners for crosses.

Seattle putting forward pressure on that young defensive line when they try to pass it out of the pack can not only create chances, it can force them to revert to punting the ball forward, which should neuter any speed that Nyassi and Pontius bring. Instead, they'll be forced to rely on the counter to score. With Osvaldo Alonso out, that's potentially fruitful. But DC has so few dangerous threats that Seattle should be able to cover them on a counter. Even if Nyassi gets by Leo Gonzalez, Traore can shift to cover him without worrying about exposing the middle. And if Yedlin can play, they can forget about countering on the left.

The success of the Seattle attack will rely on finding someone who can get service to the big horses up front. Lamar Neagle has been more effective than the high priced DP pair up front because he can cause havoc and create his own shot, while Martins and Johnson both need someone to provide them the ball. Rosales is the best provider on the team when he has room to work, but increasingly he needs significant help from an overlapping fullback or an advanced midfielder to draw defenders away from him and give him time to work. His ability to create space for himself seems to have largely deserted him.

So if Rochat can bottle up Rosales, where does the service come from? This might be the game to put Shalrie Joseph out there. His defensive liabilities are less critical against DC's offense, and he can get forward to unlock the attack with one-touch passes to the two forwards. Brad Evans is a solid player, but he doesn't provide a lot of service to the forwards. The same can be said for Andy Rose, Servando Carrasco, and so on. It's tempting to play Neagle on the left to get him on the field, but he's not much of a playmaker either. In fact, Marc Burch might be the best choice at left, just to find another player that can get the ball to the forwards. The danger is that without a service provider, Seattle will get frustrated and start relying on punted crosses from Leo Gonzalez into the box. And if that happens, and DC gets lucky once or twice on the break, the Admiral will be right. The game will be a trap.