Consistent play is not just about the scoring of goals or tallying assists. What kind of play does Coach Schmid want to see?

Share All sharing options for: Eddie Johnson can bring hunger, hold-up play and goals to Sounders

Jurgen Klinsmann's comments about consistency yesterday were news to Eddie Johnson today. But there are things that Johnson and Seattle Sounders FC Coach Sigi Schmid want to see from the forward. For EJ he wants to carry over a certain locker room attitude.

"I don't read the paper or anything, so my last conversation with him, I wasn't told that," Johnson answered when asked about Jurgen's statement. "What I do want to take back from the national team is what it feels like to be in a locker room full of guys that are willing to battle and fight for each other, everyone putting their egos aside and everyone on board with what we're trying to accomplish in this organization. I think for me it was good to get away because it was a bit frustrating for me in previous games, so to get in the locker room and get that fight and that hunger and that desire and that commitment back and that winning mentality, I want to bring that back from the national team here in Seattle."

There are a lot of expectations here. There’s a lot of pressure. You lose one game and sometimes it’s like the end of the world here. - Eddie Johnson on Wednesday.

With the pressure that is Seattle soccer, each loss hits harder than in most MLS cities. Johnson mentioned that he enjoyed seeing the team get wins without him as it should bring every one up. He just needs to contribute.

Contribution will come from a lineup that is likely to feature Johnson, Neagle and Martins all at once. This week the team gets several days to work on how that system functions. But it will not work perfectly with just days of practice. In two or three games the full power of that shape should come into focus.

"I think his hold-up play has been good here," Sigi said Wednesday after practice. "His ability to retain possession for our team is much higher than say Lamar Neagle's is. There's obviously a significant difference there. He's got to get that hold-up play, but hold-up play is holding it up, knocking it back and getting back in the box. Those are things that as the guys play more with each other they'll understand how to get that more efficiently."

The post pass move is where chemistry comes into play. That knowledge of who moves where and how comes from playing together frequently. Johnson pointed out that a vast majority of his goals with the United States National Team are assisted by Donovan. Those two have many matches together.

Due to injury and national calls the trio of Johnson/Martins/Neagle lack that chemistry. The little moves and knowledge of who does which small jobs is learned on the fly.

"Anytime you can get quality players on the field, it's good. It's just finding the right mix of ability, skill, effort, who does this little job, that little job as long as we can get all those things going in that direction we'll be succcesful with all those guys on the field," Sigi said of his attacking trio. "They need to get out there together in order to establish who does what."

Service into attacking positions from the Sounders will not be at the level of the USMNT. Those players are the best of not just MLS, but also some out of Europe and Mexico. But the Sounders' service is improving. The attacks from the flank should now generate enough attacking variety through Burch and a healthy Rosales (knock on wood) that EJ will no longer need to drop deep to get the ball.

"The amount that he sprints within the game are always near the highest levels of our team," Sigi responded about Eddie's effort. "It's just a matter him being able to continue putting pressure on the opponents' defense. Sometimes it's a little harder when they pack it in on us in the back. Eddie, I don't want to see him get bogged down in the midfield so much, I'd rather see him stay high."

That's the consistency needed. Johnson sitting off the shoulder of a defender, getting ready to sprint through the line for a pass either over or through, or positioning himself to settle a high ball to him. After working with and off Neagle/Martins he can spin into area or float back to poach as necessary. With the the more potent crossing coming back to Sounders FC he can also snap some headers like the EJ of 2012.

Johnson likely to be at World Cup 2014 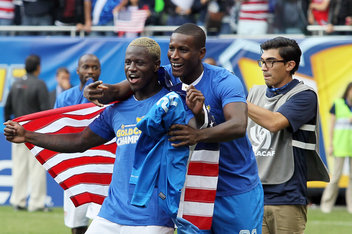 His play earned his way back onto the roster

"It's me being more patient when I'm here," Eddie said about the quality of teammates, "because I'm not going to say every ball I get on the field is perfect. So it's me being patient and believing in the players that are around me. Eventually, at the end of the day, it's me being confident in myself in front of goal. I'm not worried. The goals will come. It's just a matter of time."