Game three of the Cascadia Cup season provides the opportunity to pull way ahead in the standings and put a moutain to climb in front of the Timbers and Whitecaps.

On Wednesday the Seattle Sounders played a match against DC United that probably would have only been a win against DC United (or maybe Chivas. Maybe). Seattle once again struggled to get the ball to its dangerous forwards in dangerous places. Thanks to the incredible efficiency of Obafemi Martins, who finished the game with a strike rate of 100%, those few chances turned into enough goals. And thanks to the complete offensive ineptitude of DC United without Dwayne DeRosario, 'enough' goals was one.

In fairness, Brad Evans perfectly weighted through ball behind the defense could have resulted in a goal against any team in MLS. But Seattle's second had to wait until injury time and was a complete gift from James Riley (thanks, James!) who should have booted a ball out of danger rather than try to dribble it across Martins. Seattle so outclassed DC's inexperienced backline that waiting that long for the second goal (and really not getting many other great chances) is a problem.

The cause was drearily familiar. With Zach Scott left unmarked at right back and effectively dared to turn into Zach Scott: Play Maker, which he could not do, DC was able to bottle up Mauro Rosales at right wing, neutering Seattle's most effective playmaker. And frankly even when Rosales was able to get the ball in space, he was wasteful. Without Rosales providing service and with Andy Rose cautiously sitting back as a defensive midfielder most of the match, there was nobody to get the ball forward. Brad Evans on the left is a reliable holder of possession, but he is an erratic playmaker. That forced Eddie Johnson to track further and further back into midfield to get the ball, where his instinct to lay the ball off and move forward generally resulted in laying the ball off to the defense and starting the attack all over again from scratch.

The situation improved noticeably when Shalrie Joseph replaced Rose, as he was able to move the ball forward through the midfield, and it's no coincidence the second goal came when Joseph won the ball far up the central midfield and played it into the box for Martins (though admittedly Oba and Riley [thanks, James!] still had a lot of work to do).

So the question for today's match against the Whitecaps is obvious: who can get the ball to the forwards? If Osvaldo Alonso can play, his tremendous defensive coverage will free his partner to move forward and be that playmaker. If that partner is Joseph, the team suffers in defense but he's probably the best central provider. If DeAndre Yedlin can play, he not only moves forward to cross the ball himself, but he can force defensive pressure away from Rosales. And once again, I think Marc Burch at left wing is something that has to be considered.

For Vancouver, this is also their second game in four days so there's no advantage in fitness. And in fact, they had to travel back from Kansas City which makes up for Seattle's travel to Vancouver. So the opportunity for rest and training should be equal.

Earning a point in no-longer LiveStrong Sporting Park is no mean feat, but the Whitecaps relied on quite a bit of luck to do it. They were outshot by the Sporks 25-10, but KC could only put 3 on target. As incredibly wasteful as Sporting was, Vancouver was only able to get their tying score on a tremendous free kick goal from Camilo. Some of that is the good KC defense and some is because Russell Teibert, who has suddenly become an important part of the Whitecaps attack, is away on Gold Cup duty. It was Teibert who assisted both of Camilo's goals when the teams matched up in Seattle last month, forcing Lamar Neagle's late winner.

Here's Vancouver's average position map from the game against KC: 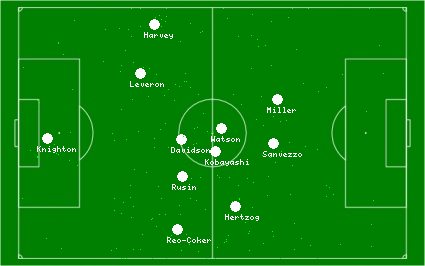 With Teibert out, Corey Hertzog takes over as the right wing in the 4-3-3. Kenny Miller seems to have become the left wing and Camilo the center forward, reversing how they played for most of last season. That was also the case in Seattle, and Camilo's two goals there are evidence that he's productive there. He's now tied for second in the league with 10 goals. Of course, Miller — their high-priced Designated Player forward — can't be ignored either. He has 5 goals in only 9 games played. That's the two-headed attack that the Seattle defense will have to shut down. Without Teibert, the service will mostly come from the EPL veteran Nigel Reo-Coker. Crowding the midfield will be key to cutting off his passing lanes, and that's where a healthy Alonso can make the most difference.

The other question is what to do with Lamar Neagle. In the previous matchup he terrorized Vancouver in front of 56,000 witnesses. He batted for the soccer cycle: He provided a perfect assist to Rose for the opener, he drew the penalty for the second goal, and he scored the game winner. And he created other good opportunities as well. But thus far it's looked like putting Martins, Johnson, and Neagle on the field at once hasn't worked. Neagle's been much more effective up front than on the wing. But maybe that's just a sample size problem and there really is a recipe for getting them on the field at the same time and keeping them effective. If Sigi can untangle that knot, Seattle becomes a very dangerous attacking team.

Of course, the elephant in the room is that this is a Cascadia Cup match. With the chances for a US Open Cup and a CCL championship cruelly torn away from Seattle, winning back that Cup becomes all the more important to keep the hardware streak alive. And this is one of only two away Cascadia matches. Given the generous schedule, getting results on the road isn't strictly necessary, but doing so would give Portland and Vancouver pretty meager odds to recover, as they'd need wins (maybe multiple wins) in Seattle to get ahead in the race. And Vancouver has never defeated Seattle in MLS play in 6 tries. Much of that is Fredy Montero, who has a particular penchant for sticking a dagger in the Whitecaps. Now it's up to a new generation of Sounders attackers to keep that streak alive and put one firm hand on the Cup.

Sounder at Vancouver Whitecaps - A Cup, A Year