The Sounders' newest Designated Player got a little longer run out than planned, but didn't seem bothered by it.

Kinda like seeing his training debut, there wasn't a lot of stuff that surprised me in Clint Dempsey's Seattle Sounders debut. He's good. We know this. His touch was a bit rusty, but he still managed to have some moments of absolute brilliance. His shots weren't as sharp as we'd like to see, but there's no reason to think that won't come.

What was surprising was how much he ended up playing. I'm sure the plan was for him to come in around the 60th minute, but after Obafemi Martins went down with an apparent ankle injury in the 34th minute, Sounders head coach Sigi Schmid opted not to waste an extra sub and give Dempsey an extended run.

"I think Clint did well," Schmid said. "Obviously he hasn't played in a game in two-and-a-half weeks or so, so once you get your rhythm back it will make a big difference. His understanding of our players and our guys is something that will grow as well. We ended up having to bring him in a little sooner than expected but I was happy with him." 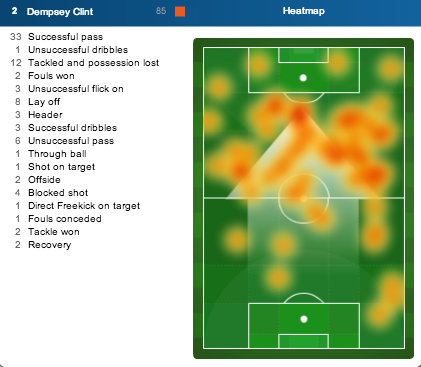 The early entry nearly paid off immediately, as Dempsey had a clear lane to goal just moments after entering, but Eddie Johnson's pass was just a hair behind him and the the Toronto FC defense was able to recover. Dempsey appeared to have another great chance later in the match, but he was ruled offside in a very close play. He still ended up with a team-high five shots, although four of them were blocked.

Dempsey also looked comfortable on the ball, completing 33 of 39 passes and executing three successful dribbles, as opposed to just one unsuccessful one. As much as his actual touches, Dempsey's presence seemed to help open up some room for others as the game opened up -- not always to the Sounders' advantage -- after he entered. And then he did this, too:

"I wasn't going to start, I'm still working on my fitness," Dempsey said. "I've only played in two [preseason] games and in those two games I played one 45 minutes and one 60 minutes, so I'm still trying to get my fitness there. I'm not there yet but I was happy with the touches that I got tonight and the work that I put in, and the chances that I created and hopefully they will start falling for me in the games to come."

The performance seems to set him up nicely to make his first MLS start in about seven years, appropriately enough in his native state of Texas against the Houston Dynamo.