Sounders reduced strength lineup should lean heavily to the right

Share All sharing options for: Sounders reduced strength lineup should lean heavily to the right

Sigi Schmid's biggest lineup choices will come down to how to utilize Clint Dempsey (forward or center mid?) and Lamar Neagle (forward or left mid). If Neagle plays up top and is replaced by Marc Burch at left mid, a likely scenario, the action will be mainly on the right side of center. This was also true against Toronto FC, but less by design and more about opportunity.

It started quite early in the Toronto win and though the first goal was from action up the middle and left it was the result of how difficult an over-commit to one side of the field can make things on the defending team. It can leave the far post open. 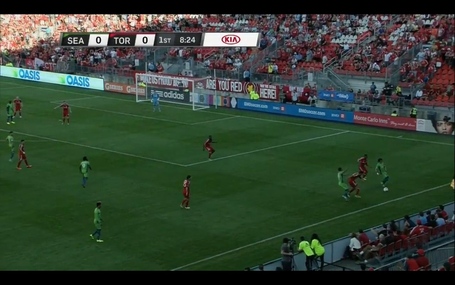 via Waking the Red

Against Houston lacking three top players and forcing another adjustment that right-middle-left balance will likely be similar. Mauro Rosales is on a hot streak. DeAndre Yedlin is still a speedy right back that can change games. Dempsey could play out left, but he will likely be in the middle or on the far post as Seattle's CMs and other forward inter-play with two of the three best ball handlers in the game (Dempsey is the other).

Over-balancing can mean trouble for Seattle. If they get close to each other two men can guard three. Simple passing lanes can disappear quickly. The biggest issue may be that it has a very limited single angle on goal.

But if the over-balancing breaks through the defense through a creative pass to the middle or cross to the far side the defense is entirely out of position. There will either be mismatches or players in Rave Green completely open. When those players are Clint Dempsey and Lamar Neagle against Kofi Sarkodie goals are in order.