Texas' greatest ever soccer player will take the field for the Seattle team tonight, but the Sounders should feel good if they can steal a point and run.

Dempsey-fueled enthusiasm aside, let's not harbor any illusions here. This is a difficult match. Houston is a very good home side — they've only lost two home matches all season. Last season they didn't lose any. And the conditions in late August will be particularly brutal, even if we got a break with a late start. And the Sounders have laid some real eggs on the road against good teams this season. Rooting for a win is fine (and expected), but a draw would be a good result.

The engine of the team is, as it has long been, Brad Davis' left boot. From the left flank he'll loop in plenty of accurate crosses, particularly on set pieces. Houston doesn't have the ranks of tall trees they've had in the past to head those crosses home, but they have enough. Will Bruin and Giles Barnes are both solid target men, and Cam Weaver and Brian Ching can both come off the bench to add more aerial threat. I hope the Sounders practiced defending set pieces this week, because they're likely to be under siege.

In the run of play, the danger is more likely to come out of the midfield, from Oscar Boniek Garcia on the wing or Ricardo Clark's runs in the middle, or the occasional long Adam Moffatt shot. Boniek Garcia in particular will be a handful on the right, which might be a good argument for playing Marc Burch at left mid to get two more defensive players on his flank.

Here's the APM for the Dynamo's last home match, a 3-1 home win over the Crew: 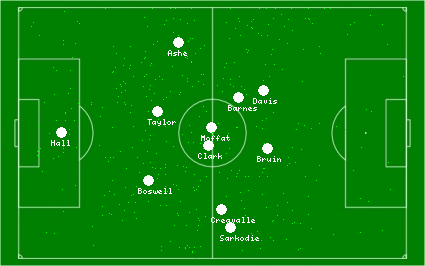 For the Seattle attack, the weakness of the Dynamo is right up the gut. Kofie Sarkodie and Corey Ashe are both pretty good, and fast, fullbacks who will be hard to get behind on the flanks. But with Clark drifting forward into more of a central playmaking role that leaves just Moffatt holding down the middle of the field. He's fine there, but if he's lining up against Clint Dempsey, that's a battle Dempsey wins all day. Unless Clark stays at home, Texas' native son will be free to rain down shots and through balls from a withdrawn forward role all day. It would be even better if we had Eddie Johnson occupying the center backs to prevent them from helping, but alas he's been busy with the US national team and is suspended. It will be on Lamar Neagle to be big in the attack and dangerous enough to occupy the Houston defensive line.

If Shalrie Joseph is able to start, he can be another strong presence in the central midfield. With Osvaldo Alonso behind, Joseph in the center, and Dempsey ahead, Seattle would have a midfield spine that could run roughshod over Clark and Moffatt. And we'd likely see a game of Seattle pressing through the middle and Houston coming back on the flanks, with the points going to whichever team gets the last good attack. Or, more likely, the points being split, which frankly would be a pretty good result for the Sounders.