That teams shift tactics while being up or going down is not a surprise. How should that color our mental image after Seattle's loss to Houston?

Share All sharing options for: Game States and Mental Imagery

When Seattle went down 2-nil so quickly to the Houston Dynamo it was disheartening to say the least. Sounders FC looked ready to get run off the pitch. But as the match went on Seattle Sounders FC looked stronger than they had. This is not unusual. Tactics shift with big leads. Likely losers get more opportunities to mount a comeback, as they take more shots. Sadly, their shooting percentage goes down. This 'game state' of down two goals, and then one goal and then two goals should mean that the Sounders had a bit more possession, a bit more shots on goal and a chance to draw.

All of that is true and it makes us feel good when thinking back on the match, but was it true enough to show that Seattle could have/should have earned a point? 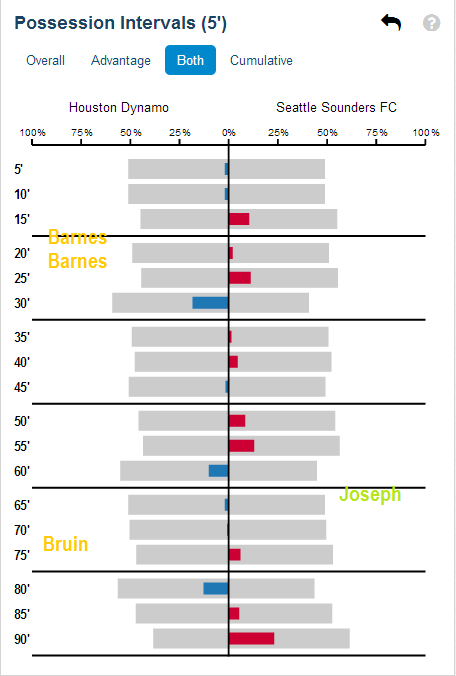 This image just adds the goal times for reference

Possession is not a great indicator of wins and losses. We've come to accept that. But it can indicate momentum to some extent. So can shots taken, they were basically even for first 30 but the last 60 are in Seattle's favor. This follows known patterns.

This is significantly different than the blowout loss at LA earlier this year. There no comeback was attempted. Following the numbers in some fashion means that Seattle was at least average. There are other positives though.

Seattle created more "Big Chances" than Houston. No, they didn't finish them, but over time finishing rate tends to normalize. One more goal would have changed the mental image we carry with us heading into Portland week.

Right now that image is a bit torn around the fanbase. The loss was either horrible or a noble effort. It may just be both. Over the season Seattle is lacking in creating chances. Saturday night they did not. The match spent more time in Houston's end than Seattle's end. They were as good as Houston in creating chances. They just did not finish.

Finishing is a problem. In a game lacking EJ and Oba that really should not be a surprise.

The balance of play may have wound up in Sounders FC's favor, but it did not indicate they should win. The balance of play took place with Seattle down an early goal. When the opposite scenario is true Sigi's men have a 40+ match lossless streak showing exactly how powerful leads can be.

The game state did not favor Sounders FC. The club performed as they should in those down times and with a header here or there could have tied the match at two-two. Your mental image of the loss could be of 3-1 (and that's painful), of a valiant comeback (yeah, we're getting better), or it could just be that this is just one road loss in a long MLS season (that's valid too). None of those are wrong. You can choose your own burden.