There are many different ways to play the soccer. Portland clearly values possession. Montreal is a defend and counter squad. Some play stop-start soccer ball. All of these have weaknesses. The Timbers possession drug showed just how problematic that can be.

Only three times this season have the Portland Timbers been out possessed (Opta definition). Sunday night's loss was one of those.

It was rare and they seemed to struggle at times figuring out how to break down the attack. There were also a couple brilliant passes that unlocked two doors at once. But that was fairly rare. They did not generate the number of attempts on goal they are used to doing.

During several stretches of the match it looked as if the Portland Timbers were more worried about winning the possession numbers than they were making a risky pass and failing. None of these was more evident than in the 30th minute when they did not reset, they retreated and eventually just give the ball away. 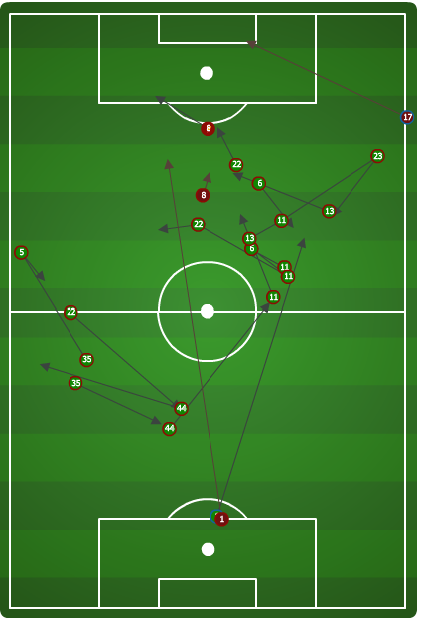 From the first pass to the last every single Timber outfield player touches the ball. They probe centrally, to the left, to the middle, to the right they find no weakness. As each pass and dribble slows down Seattle Sounders FC is able to pull back and defend.

This is not one-v-one defense. It takes a team to do this. Passing lanes are shut down by every layer of Seattle's formation.

No, Seattle is not able to win the ball. But they fine defending a team so unwilling to enter the final third. Only 25% of the match took place in Seattle's defensive third. The drug of possession consumed the Timbers. Not only did they lose the match, they also lost their game plan and in fact were forced into more long balls than the Sounders.

Possession is a path, but if it is not a path to goal, nor a path to defending the ball it is just a recreational drug.